Who would have thought it? 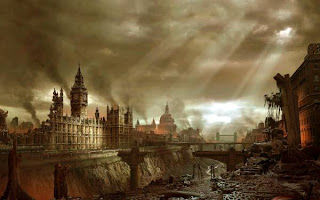 The Times have a story about the outgoing government rushing through legislation and signing up to impossible contracts.

Vince Cable, the business secretary, said: “I fear that a lot of bad news about the public finances has been hidden and stored up for the new government. The skeletons are starting to fall out of the cupboard.”

John Pienaar is discussing it now on R5. His guest says this is all spin. That the Tories are preparing us all for big cuts by saying 'Oh no..look what we've found.' That is probably true but I wonder if there isn't a lot more to it.

One former adviser to the schools department said there was a deliberate policy of “scorched earth”. “The atmosphere was ‘pull up all the railways, burn the grain stores, leave nothing for the Tories’,” he added.
I read about it first, here, in November 2007
when Nick Drew wrote about it. CU has posts too {that I can't locate at the moment.}

I admit to initially being sceptical. Gordon had only become PM in June!
Labour were incompetent, reckless and misleading but to actually set out to damage the next administration? That would be Treason wouldn't it?
Posted by Bill Quango MP

I cannot believe the media plaudits being directed at Mr Brown at the moment.

Kev - agreed (!) it is very odd: habit of a lifetime, he is a bully and they are all afraid of him

if the bugger were dead I might feel constrained by decency (I haven't, for example, yet let rip in the direction of the late 'Sir' Dennis Rooke ... give me time)

as it is, when the moment arises I will happily say dreadful things about Brown

there is a pome coming down the line shortly ...

(shall I be seeing you next month?)

That would be Treason wouldn't it?