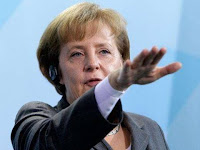 News from the CDU's annual rally. Err, congress. Not 'rally' at all.

'Germany’s economic strength gives her leverage that policy makers who built the euro didn’t have. “[Merkel] can have much more of a German stamp on this political union than 20 years ago,” Brzeski said'.

Great choice of words Mr Brzeski, the whole of Europe is greatly comforted.

Bertelsmann would be proud of her.

My apologies for commenting twice but .....

I have been saying for months that eurosceptic opinion that failure of the euro was "imminent" was naive, vastly underestimating the sheer will to power of the EU elites. The USE outlined by Merkel here uses the crisis to achieve complete financial union.

However I gather Cameron is now styling himself a eurosceptic. This means he is about to go for a "cast iron" moment as he lulls people into a false sense of security about the USE, and slips us in.

Of course Merkel is completely mad. She is the one that closed all the German nuclear power plants overnight because she thought the Japanese earthquake would result in nuclear disaster that would destroy the planet. She's also East German and of dubious political background.

Thing is that the Germans seem to be up to something. All my figures suggest German economy is heading for the toilet but they still claim that the German economy is growing pretty fast. Their banks are pretty exposed to eurozone crisis. Saw something on FT Alphaville that shows that the Bundesbank is also printing a lot of Euros at the moment. Think they may be trying to paper over cracks in their own economy before making a clumsy grab for power.

I think that this might be the straw that breaks the EU back, to be honest. I can't imagine the Dutch wanting to be ruled by the Germans, for instance - they had a very bad experience with it last time.

No apologies for repeating my comment from the last topic. It is relevant.

Whatever plans the 1000 year reich may be trying to hatch, they are still broke (in every sense of the word) and cannot pay their bills. No amount of political bullshit can get around that.
So:

1-They decree a united states of EUrope. Millions will be against it and them. Are they going to try and emulate the shining success of the soviet union in running a police state?
2-The idea that this "union" is somehow the end of all the political pigs problems is laughable.Europe and the west in general is sinking under the weight of regulation, tax thieving (including inflation which is state theft just as surely as any formal tax), debt(the santimonious germans are heading for 100% gdp debts themselves--bail out the rest of europe?) and the consequences of welfare/warfarism and wicked laws already enacted, never mind those to come. The once "mighty continent" is going down (as is the USA) and nothing can stop that.Like an alki they will hit rock bottom.

Mr Ecks - I am not advocating the USE or the survival of the euro. I would be ecstatic if I were proved wrong.

I do think the EU and the eurozone will completely break up eventually. But "eventually" and "imminent" are different. Too many eurosceptics have substituted their wishful, and apocalypse-now, thinking for reality.

People who said the euro was on the "brink of collapse now" 6 months ago have already been disproved.

As for the German economy being "still broke (in every sense of the word)", and bearing in mind that continentals traditionally hide their bad news where we wash our linen in public, in comparison to every other European economy (inc the UK), Germany's is the strongest.

There is only one final solution open to a sane mind. France goes off with Euro south, Germany takes off with euro north. And from their POV they try and join it back up again at a later date.

Anything else is either printing money without the demographics to make good on it. Or driving everyone over the cliff.

Ideology and the Europeans are peas in a pod, I think it will be the later.

I get what you are saying.My post was not an attack on you. While I am second to nobody in my hatred of the eu I am sure we are on the same side.
However, it seems to me that the situation is this: To keep the euro alive someone is going to have to pay. The germans are making it clear it won't be them. What you are saying (correct me if I'm wrong) is that, if merkal and the eureautrash can force some kind of united dickheads of europe scheme on some --or all the other nations--then the germans will pay --leaving aside the fact that they already owe 80% of their yearly income to assorted creditors.
In return for some godawful political mess (and that is what it would be--almost all europes electoral proceesses would have to be the first casualties if eu rule was to dig in) the germans will come up with the 2 trillion, in real money, not printed up funny green, and take on every deadbeat in europe in the same fashion that they have with east germany.

Not impossible but highly unlikely. It means that the eu's m o--gradualism--is out the window and brazen tyranny is in. Their grip on power is far too weak for that.

Maybe this crazy East German woman had this in the plan all along. Create a $3trillion debt crisis in the EU, use it to force through full unification with her in the driving seat, then sell it all to the Chinese communists who just happen to have built up a $3trillion war chest at the same time.

However, it is more likely that the German's simply fail to understand Auslánders (foreigners) and have completely and utterly misjudged the situation. They really aren't as smart as they appear.

Belgian yields heading north at an alarming rate. Could break 5% today. Spanish yields could break Euro-highs today, if not tomorrow.

The chinese "war chest" is held in us dollars. When the dollar hits the skids big time, the chinese will not be happy campers. Euro bailout--no.

"People who said the euro was on the "brink of collapse now" 6 months ago have already been disproved."

Hmmm, no I think they are right. It is past the point of no return now. It will just take time for the end game to play out, and to determine if debtors or creditors will get hurt most.

If they do nothing then the PIIGS will crash so badly they will be forced to leave the Euro anyway. Any Euros left in the PIIGS would fly to Germany. Interestingly the national banks of each Euro nation have the right to print Euros, doing so just becomes a debt to the ECB, so in theory each national bank could become the "lender of last resort" printing money as they wish and leading to total loss of confidence in the Euro as a trading currency.

If they print money this will resolve many of the problems of the PIIGS(+B) but the new money printed would be looking for a new home to invest in - this would probably end up in relatively low-risk Germany causing hyperinflation there.

I presume that Merkozy's sudden determination to forge a full union is because they have now realised that in 12months the USof Europe idea will be dead and buried forever. So they have a matter of months to go for full union, but this would mean a public vote on the constitution in many countries (including Germany) and they haven't got time to keeping asking until they get the "right" answer.....

It is interesting to see national characteristics show so markedly at this time of crisis, though.

Anon 4:18pm: "So they have a matter of months to go for full union, but this would mean a public vote on the constitution in many countries (including Germany)"

Mr Ecks - That's alright, I did not take it as an attack, just part of the discussion.

I think we shall have to agree to disagree about whether Germany has the treasure to prop up the euro. I think Germany has, but then properly organised (ie a fiscal union) I don't think a lot of treasure is needed, it is more a matter of perception and trust.

You do realise the EU elites are permitted to lie to their citizens, don't you? It is not gradualism that is their modus operandi but denials, obfuscation, stabs in the back, cheating, one rule for us and another for them, broken promises, behind the scenes pressure. In short, anything other than truth, openness, accountability and democracy.

"I think we shall have to agree to disagree about whether Germany has the treasure to prop up the euro. I think Germany has"

It would need to give 3trillion euros in cash to do a proper bail-out. It doesn't have that cash as it doesn't run a surplus. It would need to take that on as debt, which would amount to 100% of GDP to add to its existing debt (approx 80% of GDP). So that would put Germany in the same boat as the nations it would be trying to bail out. It should also be noted that Germany's current total debt (corporate, government and household) is more or less the same as Italy.

It is interesting that there are 9 countries in the Eurozone with populations > 7million and of these only 2 do not have a debt crisis (Germany and Holland). Which makes Holland's threat to push out the weaker economies rather interesting - there would really only be one sizeable country left in.

"It is not gradualism that is their modus operandi but denials, obfuscation, stabs in the back, cheating, one rule for us and another for them, broken promises, behind the scenes pressure. In short, anything other than truth, openness, accountability and democracy"

Those things are the sinews of gradualism, Budgie. And they have been done over time rather than all at once.The people of this country would not have accepted all that has been done by the eu if they had tried it all on at once.

Anon 10:05am, bailouts are sticking plasters - they will not of themselves remedy the ills of the eurozone, so even 3 trillion may not be enough. The cure is fiscal union. Then the (external) bailouts will not be needed. Taken as a single state (ie with fiscal union) the eurozone is in better shape than either the UK or USA.

Mr Ecks said: "The people of this country would not have accepted all that has been done by the eu if they had tried it all on at once."
I hope you are right.

It was wondering if I could use this write-up on my other website, I will link it back to your website though.Great Thanks.
www.sebrschools.org |

I just wanted to let you know that what you do really affects peoples lives and that people - like me - truly appreciate it.
travelingarmenian |

Well, very good post with informative information. I really appreciate the fact that you approach these topics from a stand point of knowledge and information. This is the first time, I visited at your site and became your fan. You are bookmarked. Please keep on posting.
www.csautostore.com |

I have no words to appreciate this post ..... I'm really impressed with this post .... the person who created this post was a big thank you man .. for sharing with us.
www.musicmashroom.org |