Waiting For Sturgeon's Letter. The Suspense!


As Continental Europe hyperventilates over whether May's Letter contains veiled threats (hint: yes, it does - and see part (2) here), we all wait for Nicola Sturgeon to complete her homework in her best loopy joined-up girl-writing.  As luck would have it, a photographer just happened to be in her lounge.  And she was wearing her Interview Suit! 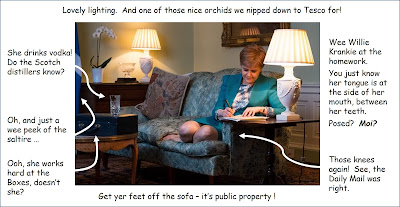 This letter had better be worth it.

Over the Legs-it scandal (at first glance) I found myself getting a bit hot for Sturgeon - and then realised who I was looking at and vomited in my mouth a little bit.

Loving the age of staged photos for important moments, i'm hoping to see a photo of David Mundell pissing on the shredded remains of said letter before posting it back

I'm expecting her decision to say she wants to begin the campaign for a second Scottish referendum almost immediately. And she will whether the government agrees or not. Scotland will have its own campaign and might or might not hold a non-binding but binding referendum anyway.

*not binding in the event of a no to independence. Otherwise totally and irreversibly binding even if won by a single vote.

prepare to fall flat on your face

Today the Bruxelles establishment has said that *after* UK independence we will not be free to set our own tax rates. How does that leave a hypothetical Independent-but-stil-in-the-EU-Scotland?

Seems May didn't even read it. 5 seconds after it was delivered the BBC had a piece up saying "Prime Minister, Theresa May,said she has already ruled out a referendum."

What was it she wanted again?