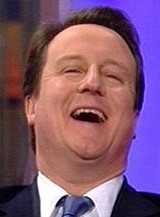 Jolly scapegoating weather
Lobbying is a breeze!
My Greensill chums are clever
I’m raking in serious fees
And I’ll do whatever -
Just whatever I jolly-well please!
You can call me whatever
But don’t call my lobbying ‘sleaze’ ...

I can accept without rancour
That Boris is PM (- how?!)
But I’m a tremendous banker
Kiss my arse and bow!
And I know you all secretly hanker
For the job I am doing now
So go and sling your anchor
If you're looking to stir up a row

Everyone fills their faces
As soon as they leave Whitehall
Kicking over the traces
Revolving doors and all
With our contacts in high places
(I’m just giving Rishi a call)
Yes, Downing Street clout is a basis
For having an absolute ball!

Twenty years on, whoever
Writes up the history books
Will sully our names forever
As shameless, insatiable crooks
Yes our names are blackened forever
And they’re calling us merchants of sleaze
And we’ll all swing together
From the lamp-posts and from the trees !

Our old - sadly late - friend, Raedwald, used to call Cameron a 'dilletante', way before most people recognised that he was just that, and advised that we should all watch out for his shenanigans!

I thought at the time, that he was being a bit more incisive than he needed to be, but in fact, Uncle Mikey was spot on, as has been proved recently!

I'd like to think that his blog would have been on high octane over this, in spades with oak leaves...

Bravo! Cameron has clearly relaxed a lot over the next big scandal...

Looks like he could not rely on the income from his autobiography.

My main objection to David Cameron --- and I say this as a grammar school boy --- was that he is a particularly obnoxious, recognizeable type of public school boy. It's not just that he has a giant sense of entitlement, which makes him think that the ordinary rules of right and wrong don't apply to him, but he actively despises anyone who has worked hard and achieved something through their own efforts, rather than through family money.

I must say though this latest Dyson "scandal" leaves me cold - "errors towards the enemy should be lightly judged" as Churchill put it, and at the time we thought we desperately needed ventilators, until some unknown nursing heroine tried putting patients on their fronts.

Considering the other rules/laws Covid has run a coach through - like no liability for Pfizer/AZ - a tax arrangement for a few Singaporean engineers is neither here nor there.

What's far more worrying is that the PMs personal phone is compromised, I trust the "funnies" and GCHQ nerds are doing the relevant technical and personnel checks. Quite nice of whoever's hacking/leaking to do it over such a non-story - talking of which, what's the Mercer story - he's on the Guardian front page four times a week now? Has he just discovered that all our politicians are dodgy?

It's odd that if the media is going to bang on about sleaze it fails to cover Toniblair.

How can this be?

After all, if Cameron is Blair-lite then Blair is Cameron-heavy.

Because if tb's name is mentioned three times you have to interview him and we have to read it.
Better that he remaind us of the unmentionable thing that granny found in the woodshed 50 years ago.

He was indeed the heir to Blair and failed only for an excuse to go to war. Better luck next time, Dave. Oh,wait...

John Miller - he tried, by God he tried. Remember Christmas 2015 when all we heard on the news was "Aleppo, Aleppo, Aleppo"?

Ed Miliband's best-ever decision - to discomfit the Tories by opposing going up to our neck in Syria - I bet brother David was tearing out his hair at home (in New York, not Britain). OK, we were already steeped in blood somewhere between ankle and knee, and we're probably half way up the thigh these days, supporting the theft by the US of what oil Syria has. But Ed saved us from adding a total Syria balls up to the total Libya balls up (Cameron has the blood of those dead middle aged Northerners, slaughtered on a Tunisian beach, on his hands) and the total Iraqi balls up.

That's about the size of it, anon.