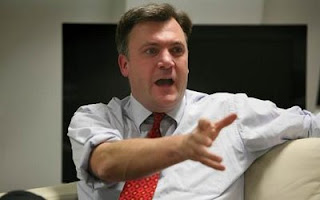 In 2007 Ed Balls was an outside bet to be made Chancellor of the Exchequer in the new government of all the talents. A massive promotion for the most junior of Treasury Ministers . But Balls had long been a loyal apparatchik to the great helmsman.

Commentators thought he would be a disaster. Despite being a better economist and a better politician than Darling, he suffered the exact same lack of communication and lack of empathy and personal skills and boorishness that afflicted his master. He also possessed the same tribalism, bias, partisan party loyalty and above all arrogance. The city thought little of him.
John Rentoul at the Independent, almost alone,wrote that Balls should be Chancellor. Iain Dale had a nice line on Rentoul's piece.

" Rentoul comes up with all sorts of historical justifications for it, all sorts of quotes praising Mr Balls and meets all the objections to him head on, bar one. And that is that Ed Balls is, well, a bit rubbish."

It was rumoured that it was Balls/Cooper who were pushing Gordon Brown to call the earliest of early elections. They would capitalise on a Tory government in disarray, a honeymoon period, the defeat of the Blairites, the removal of Blair himself and gaining from a big bounce in the polls.
In the end it proved a poor decision that began the demise of Brown.
However this should not detract from the fact that Ed Balls was right. Brown should have called an election. It would have headed off a lot of the problems he faces today.
Balls understands strategy.

Balls has developed. He has powerful contacts. Look at how little his own second home claims have featured. The Mackay/Kirkbrides hounded from office. Balls/Cooper barely rates a mention. That is not an accident. Its contacts. The Times ran "ED BALLS, the schools secretary, used Damian McBride,to smear ministerial rivals and advance his own ambitions," Anyone remember? Did it harm him? Ed Balls has that political savvy.

As the schools minister he said sorry for baby P, way, way in advance and at odds with the PM. Minutes before at PMQ's Cameron was actually flinging papers in anger at Brown for his lack of human feeling over the death of the child. Gordon Brown wouldn't say sorry. He accused Cameron of making political capital from the death. The Prime minister gave one of his worst ever, slab faced, boring, robotic, unsympathetic readings of a prepared statement. {youtube pmq's 12/11/08}.
Ed Balls has said sorry many times. And said it with enough contition for it sound genuine.

Ed Balls has not had much success as Schools Minister. The Sats for 14 years olds disaster. The pointless "parenting contracts" , the lack of funding for 17, 18 years olds staying in school. "So What?" The list is long, the successes few, the failures many.

But Ed Balls is a political animal in the same mould, from the same streets as Brown, McBride, Watson and Campbell.. At this time, at the end of this government, this is probably what Brown needs. He has lost his street bruisers. His whips aren't whipping. McBride has gone.Tom watson is going. He needs a powerful brawler. Someone who knows that if the ship sinks, then he sinks with it. Politically its just the right thing to do. Brown's enemies are plotting. Upsetting Blairites and backbenchers is hardly a problem now. Its scorched earth time. Alistair Darling finally defies the PM at the last budget and said NO." No, there is no more money. No more money for 20 years!"Ed Balls may not be so worried about finding some stimulus money and the Prime Minister has an opportunity to tip Mr Darling into a face saving, "reward for a tough job" position at the recently vacant Home Office.

In the Prime Minister's words,
"Its the right thing to do."

Well the right thing for him. If its right for the country though...?
Posted by Bill Quango MP

Balls is a bilderberger drone.

Balls and Cooper have had great success in the background and since keeping their heads down completely. Once they raise their ugly heads they will be shot off pretty quick as both are about as talented as Smith and far less charismatic. Balls career went awry when he said 'who cares' while Cameron was speaking, and that is what he said, from a Labour MP acquaintance behind him.

You know, you're right. He'd fit right in.

Ed Balls seat was abolished last year. But not to worry, Gordon offered a sitting MP a very large sinecure to stand aside and vacate a seat for Ed.

The man's about as clean as my arsehole after a good Friday night.

It appears that Bloomberg (or rather "Fathom Consulting") does not agree with your endorsement.