What a disaster. Live ! 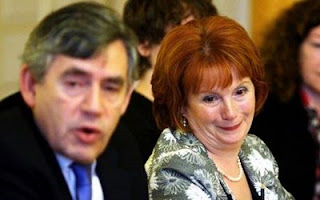 Poor Gordon, trying to conduct a reshuffle, being undermined by his new appointments quitting as he speaks. Gordon has denied that he ever wanted to move the chancellor from his post. Brown is using his ability to tell and retell a lie over and over while making it sound like the truth to great effect. He even managed to make the appointments of Dawn Primalo and Glynis Kinnock sound like the bringing in of positive assets to his government, instead of the scrapings at the bottom of a very empty barrel.

Here we have had a sweepstake on future cabinet appointments this week. I thought I was on a loser with my poor picks, but now I'm not so sure.

- Gary Neville
- Adam West
- Katie Price
- Diversity
- Sir Ranulph Fiennes
{ if you want to play yourselves its easy. Pick a cabinet post, say minister for local government, and then go to google serchbox. close your eyes and bash the keyboard three times. The first coherent name out is your choice. Try it.Best entries into the comments for final adjudication
It seemed a far-fetched way to run a country last week, but today..its as good as any other method in use.}
Posted by Bill Quango MP

I looked for Minister of Defence and they couldn't find anyone at all!

- but that can't be right, he's a Russian spy and a cottager, couldn't possibly be a Labour MP

- nope, he's a fictional character, from Dickens if I remember correctly

you know, it sort of works..

At least Sir Ranulph Fiennes got somewhere he intended to to to.

Stains, an Australian Shepard on "It's Me Or the Dog,"
http://www.youtube.com/watch?v=uUbsc_a-e3g

I'd watch that show.

Good old George, the man who prompted a statement in (IIRC) "The Times" that "George Brown drunk is a better man than the Prime Minister (Harold Wilson) sober.." :-)