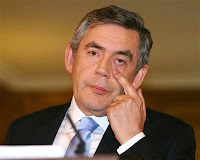 Apologies to those of you bored with this story about Northern Rock, but it is a fascination of mine and also a great microcosm for the credit crisis created by the Government, bank of England and the Market.

The Government's control of Northern Rock has taken another couple of bad hits today. Firstly, as it runs out of money very quickly and its loan impairments increase, it has been forced to stop paying bondholders, where it can. In a private company, this would be the end more or less, of course, the Rock is well past this stage. It does not help to set the business up for the quick sale that the Government want before the election.
Then the remaining Mutual businesses in the Country have lodged a submission with the EU, saying that the Government's current plan for the Northern Rock business going forward (a good bank/bad bank model - with the bad being taxpayer owned) is anti-competitive. They insist the Rock should have more lending restrictions to prevent market domination.
Oh dear, what a mess. This whole fiasco is going to cost the taxpayer billions of pounds and if the EU reject the Government plan then it will be back to square one. If only there was a solution someone could think of?
Posted by CityUnslicker

no apologies needed. it is your blog after all.

maybe you should have a subsection for NR? With a running total for costs to the tax payer from post to post!

the full story of this (as opposed to the many armchair financiers being wise after the event) will be interesting reading one day.

My last post did the calcs. I think NR will cost the taxpayer at least £6 billion and maybe £12 billion.

An orderly wind-up would have not been without its own costs, but far cheaper.

Now the Socialists have a mortgage toy to play with too and distort the market.

My betting is that the government will sell Northern Rock to the Bank of England who will borrow the money from the funded public sector pension schemes, who will then sell to Exista for that company to lodge the stock with Kaupthing as security for an extended loan Kaupthing will then raise the money by loans from UK local authorities. Is this clear?

It was one of the easier ones to call.
But would the shock of the end of NR caused Lehman style panic in the UK banking sector?

"But would the shock of the end of NR caused Lehman style panic in the UK banking sector?"

(I'm also confused by why CityUnslicker appears to believe the Socialists have been given control of Northern Rock, given that both the current governing party and their likely successors are mildly authoritarian corporatists. IIRC the Socialists have a couple of seats in Scotland, but are unlikely to ever form a government even there, and financial regulation isn't a devolved matter anyway.)

JohnB: Surely there is no reason why an authoritarian corporatist can't be socialist?
Many people, myself included would say the current govt. are broadly socialist,(as indeed are the Tories from what they have uttered). Neither are free marketeers.
This crisis is one of corporatism rather than of capitalism IMHO.

John B - Brown is a redistributive socialist. How this manifests itself in his madness is strange.

As for NR - there was plenty of time to wind it down after Sept 08. It was not nationalised fully for 6 months after this time. The answer is not as simple as it seems. yes at the time of panic it MIGHT have been dangerous.

But if the country had allowed HBOS and NR to go bankrupt then we would face a much rosier economic future.

Corporatism, as you rightly say, has proven very destructive.

The Government's control of Northern Rock has taken another couple of bad hits today. Firstly, as it runs out of money very quickly and its loan impairments increase, it has been forced to stop paying bondholders,

Do you mean HMG or The Rock?

Everybody knew NR was going down the pan and expected it to do so, and the damage would be minimal to a small area of the country. Quite apart from that, anything worst saving would have been by a takeover.

It was only saved to save votes for Labour in their heartlands, and nothing more. Comparing some shabby little back water crappy bank to Lehmans is cretinous..unless of course you suck on Labour dick of course...that will be it!

It is far, far worse than that.

Why was Northern Wreck saved and LDV wasted? Why were HBoS and RBS saved but not Longbridge (Rover)? Why are the (profitable) aluminium smelters not being helped like the banks?

The only reason that makes sense is that Gordon Brown, with the banks, was protecting his own back. Shielding Labour voting areas, even those in Scotland, was incidental, otherwise why not save the industrial businesses as well?

The Chancellor running the banking system, the Chancellor who was matey with the biggest culprits, would have lost his job if RBS and HBoS had crashed. Brown has used trillions of taxpayers money to buy his job back.

Brown is trying to hide his utter incompetence, and his rank cowardice. It is a case of gerrymandering and corruption by Brown on a scale almost beyond belief.

Funnily enough, Barclays and Nomura seem to do very well after buying Lehman. As do its employees

Compare and contrast with the various "saved" banks and their new owners.

Thanks for all the comments. Some very astutue ones.

Budgie - yes corporatism is a wild beast, it is horrid when the government decides who is saved and who is not. This is what we have marekts for.

for all that though, Longbridge et al is small beer with a few thousand workers. RBS going down could literally have affected millions of jobs. Wreck not, hence the stupidity in saving it.

Marchamount - They are one and the same now.

Anon - Great point that. The same is true for the Bradford and Bingley workers who now are at Abbey or the many mutual workers now at Nationwide - it is as if the private sector can make better decisions than the Government. Who would have thunk it.

1) does it matter if NR shareholders lose all their money and NR staff get sacked? - no, of course not.

2) does it matter if a bank that has borrowed £90bn on international credit markets (and which has about the same in assets, but in the form of residential mortgages at a point when the secondary market for these has evaporated) goes bust? - yes, very much, because the cash raised by a firesale of mortgages in October 2007 would've come nowhere near meeting NR's liabilities, and the fallout would paralyse interbank lending (you're looking at a shortfall around 1/3 the magnitude of the Lehman collapse).

Barclays and Nomura did well out of Lehman because they bought the best bits, didn't take on any of the debts, and did so at a time when there was a lot of money to be made in investment banking.

HMG took on all NR's assets and liabilities and did so at the worst time for UK mortgage lending in living memory. Santander only bought B&B's branches & customers - and it's sacked 2000 B&B staff since taking over...

That would make a sense to them as they are working hard to achieve good result.
ronthomhome4sale.com |

Positive site, where did u come up with the information on this posting? I'm pleased I discovered it though, ill be checking back soon to find out what additional posts you include.
ritualjazz.com |

I recently came across your blog and have been reading along. I thought I would leave my first comment. I don't know what to say except that I have enjoyed reading. Nice blog. I will keep visiting this blog very often.
http://www.mnfoodtrucks.org |