The Dogs That Haven't Barked ... Yet 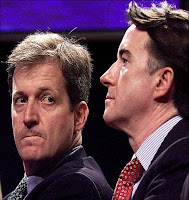 It's pretty clear that George Osborne's bold speech gives an attack-minded NuLab strategist a lot of material to work from. And Labour's own conference indicated strongly they intend to go down fighting, kicking, lying and spitting.

So their almost total silence this week betokens the most ferocious response to come in the days ahead.

Given their mendacious performance in the 1997 election - which by the spring of that year couldn't have been lost by Labour in any circumstances - it was always likely that Brown's final campaign would be built upon monumental scaremongering and blockbuster lies.

Sorry, Nick, this is O/T, but it follows from previous theme.

Mr Kirby is a reliable researcher. This shows that control of gold, the "bird in the mineshaft" is almost exhausted. D Bank was implicated a few months ago, and had to be bailed for exactly the same reason.
JPM is a major "Bullion Bank", so we know where their supply came from.

You may be unaware, but it is the stated intention to destroy the corrupt pillars of western hegemony in this market.

I have mentioned "pillars" before, and the fact that it was investable.

Jim Rogers is today quoted as saying the commod boom will last another 20 years.

Todays movements in gold, oil, and the $, and equities, were strangely counter-intuitive!

It's yours to use.

Sorry about the O/t, but this is rather relevant to recent post/theme.

Sorry, but Campbell is discredited, and also so is Mandelson. Look how effective they have been since last year? Both utterly useless and despised by an electorate that has seen through their crap. Draper, McBride, amongst others, were their satellites but got nowhere.

They even think that bringing Blair back to fight the general election for them will work...HA!!

They are living in the mid 90's where they think they can feed the voters any all shite and they think their core mong...sorry vote, will support them regardless.

Houdini - hope you're right, may not stop them trying ...

anon - investable - but when do 'they' do a Roosevelt and pull the plug on the whole game ?

Gold is no longer currency in "they" countries, it is private property.

but confiscation of private property....?

Where do they draw the line between gold for investment, and coin collections.
And how do "they" know who owns some.

In every country I've traveled in, other than the UK, it has been accepted at banks.

In the UK, Bullion coins can always be traded in at bullion prices.

Previous confiscation was undertaken because the US notes were exchangeable for gold, on demand. They were on a "gold standard", as was the UK previously. Gold had to be taken in in order to devalue the paper, ie revalue the gold, upwards.

This is precisely what is happening, right now with the £ and $ against gold, since they are free (relatively) floating pure fiat.

I think the entire issue of a Roosevelt is a Non issue, given current circumstances, even the UK gov't has removed VAT from gold bullion coins, (Kruggers, etc) but retained it on silver coins and bullion.

I figure there is a greater chance of capital controls emerging from the pit in the near future, as part of increasing protectionism, despite fine G20 words.

I see POG is flying.

Nick, this is about the best explanation that I can find

I would make 2 points.

1)The $ currently carries a reserve currency premium. As other currencies enter whatever "baskets" are to be used, that premium will disappear, progressively, over the months.
Plus the $ descent will be heavily managed, - - for instance last week we had at least 3 S E Asian central banks intervening to lift the $ .

The Chinese currency is pegged to the $ currently, this will not be removed until a transition to domestic consumption capable of mfg capacity uptake is achieved. Then it will drift higher, and the $ will in consequence drift lower in the basket.

The days of $ hegemony were announced in retreat when China sold debt into foreign countries denominated in Yuan.

2)The UK has a greater debt to GDP % than the $, so potentially a greater % currency decline is required to re-set the economy.

The author makes the case of oil as a currency. So far gold has reacted less than oil to currency depreciation. This, in my opinion, is because of decades of artificial suppression by western gov'ts, in order to hide the covert theft from the population of their savings, via inflation. Now this is being exposed as a deliberate policy, particularly as several nations are stating that gold should form a large part of the "basket", I anticipate a correction, which will no doubt be resisted. The requests by Germany to have their gold returned for their own storage, and similarly by Hong Kong to have theirs returned too, is all part of the overall game plan. Russia is currently constructing large storage vaults too.

Their collectively view is that the Fiat experiment, with all its criminal conspiracies, is over. I figure it will take some time for western gov't to replace the gold, since it has probably been leased into the market to support shorting operations in the price suppression, and in all probability sold. Reporting rules for central banks allow leased-out gold to be recorded as still owned, on their balance sheets.
This should cause some monumental cock-ups in the near future.

I note that the £ seems to be absent from any and all discussions of "basket" make-ups. This does not bode well for traditional UK savers, as it potentially means a larger depreciation of the £ internationally, ultimately. But it also points to oil and gold as potential hedges against such depreciation.