Mr Gorbachov, tear down this wall 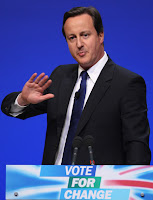 "Labour said that to solve the countries problems we need more government. Don't they see.. big government has got the country in this mess." Its a long time since we have heard that. David Cameron seems to have decided all that middle ground, who can spend the most in the best way, style of politics is over.
Only a few months ago the Tories were committed to match Labour's spending plans only with a Tory touch. Now, at last, a real message that the faithful can take heart from.
Some media commentators have already decided that DC's speech was more miss than hit, what with a heartfelt bit about his son's death, a thank you to the wife, and policy lite soundbite such as

" There is a steep climb ahead. But I tell you this. The view from the summit will be worth it."

Looking down the main media it gets a flat six out of ten. But ,like his other speeches of late, there is a fair amount of slow burn in there. The ideal and the vision is laid out clearly. I think this speech will hit its target a lot more squarely than Labour's last week. And the resonance will last longer. Gordon delivered a much stronger, if pointless, policy speech. Everything from and end to I.D cards to curing cancer. It was a good, workmanlike speech from a poor orator, if a little dull after his early crowd pleaser. There were few jokes in Gordon's speech and none in Cameron's reflecting the need for a serious face for serious times. But Cameron, while saying less, said a lot more.
He made a powerful attack on Labour's poverty record. He had praise for the NHS, praise for the troops, praise for community. The party cheered. The Tory party! If nothing else Dave Cameron has moved the party on and modernised it. He even went on about tax cuts for the poorest and they cheered. This really is New Tory.

For C@W there wasn't anything on the banks, the bailouts , the BOE or how to reform and regulate the system. The debt -business lending - job creation. Nothing on Europe either. But then, as demonstrated, that is now the job of the chancellor in waiting. We will have to watch closely.

For the real hardworkingfloating voters and the centre right, who it appears Mr Cameron now wants to target, and who have heard nothing of interest to them for years there was the big state bash. Not talks of feeble efficiency savings but a real message. The message is - end to the big state. End to pettiness - End to lawlessness - End to evermore laws , evermore regulation - evermore interference...

"We will have to tear down Labour's big government bureaucracy.
Ripping up its time wasting, money draining, responsibility sapping nonsense."

For C@W there wasn't anything on the banks, the bailouts , the BOE or how to reform and regulate the system.

He said regulatory power would be given back to the BoE and that Browns new system had failed.

What else is there to be said for now?

His speech was the most terrifying load of rubbish i have heard for [not sure how long, actually], the two-faced sanctimonious twat.

It's all for the home-owners, that's all he cares about.

Small state = fewer homes being built.
The prudent, the self-reliant = home-owners
Hard working = either slaving away to get a deposit together or home-owners slaving to pay off a colossal mortgage.
Those unable to look after themselves = old people in big houses who now get free care so that their kids can inherit that lovely big house.
Lifting the tax burden = freezing Council Tax and raising IHT threshold.

"There is a steep climb in house prices ahead. But I tell you this. The view from the summit down on the priced-out generation will be worth it"

Civil servants must be building barricades but they will surely be relieved to see the end in sight of Labour's spinning. The FSA is unbelievably politically correct and ineffective (so Labour!) that its demise is indeed a sound move. The point made about 96% tax on the poor made was commandeering Labour's tactics and using it against their party faithful. You are right, BQ, the more I think about it, the better it gets. I wish more things in life were like that. :-)

I like DC but he's really got to sort out some of the prats in his cabinet. If he's a conservative why is Grayling out there out-Labouring Labour?

MW - cmon get real. You are clearly NOT a home owner....and envy is not a pleasant thing to see. Strikes me as a very blinkered response to what for many of us was a speech saying a lot of what we wanted to hear...

I liked the sspeech but they did not go far enough. We are very close to going bankrupt and the IMF being called in. When they get into power they are going to have to slash and burn. Yes they are saying tough times ahead, but I don't think the real truth is out yet.

Mind you, compared to the opposition!

Mr Wadsworth, that is harsh. The restoration of pension fund contributions is good for equities too!

No, seriously, there were commitments to help the poor and families amongst other things. Be fair (and I hope they will be too).

Mr Wadsworth, that is harsh. The restoration of pension fund contributions is good for equities too!

No, seriously, there were commitments to help the poor and families amongst other things. Be fair (and I hope they will be too).

I like DC but he's really got to sort out some of the prats in his cabinet. If he's a conservative why is Grayling out there out-Labouring Labour?

I'm surprised you didn't get it.

The whole point in sending in the Shadow Cabinet to announce policy, while Cameron didn't really go onto policy at all is the whole point. The clear, though perhaps subliminal, message is that here is a cabinet and not a president and single person Government, here is a return to cabinet governance lost since Blair and Brown destroyed it with centralised shenanigans and unelected cronyism.

I think the speech was very good when taken as a rousing speech from a leader of a cabinet and not a President.

Methinks Mr Cameron may have an even harder time ahead than he thinks. Looking at my business I suspect the double-dip is upon us... after a REALLY good July, August & first half of September (probably down to re-stocking as we are in the materials business), manufacturing volumes have suddenly dropped like hell. For the last 3 weeks order volumes are down 80%. This is highly unusual... the last time this happened was at the first dip last year.

Checking with customers, we haven't lost any share... their orders are dropping too.

But I am not really worried: Mr Wadsworth's land tax idea will no doubt take us into sunlit uplands, PDQ. Is MW a renter?

Middle England will certainly have been comforted by a lot of what Cameron had to say, and I suspect that was the overriding objective of his deliberately policy-light speech.

Lets not lay it on too thick about any return to cabinet governance. Once he gets his feet under the desk and starts to fully appreciate the sheer power at the disposal of no10 we may see the reality of whats happened to governance over the past generation.

and as for "unelected cronyism", whats all this nonsense with Gen Dannatt? Perhaps looking at Boris Johnson's activities re the London Arts Council might be more indicative of reality.

A curate's egg of a speech.

A propos the Dannatt thing, it tells me the chocolate orange inspector's judgement is as bad as I always thought it would be.

Houdini. True. I meant in this speech a little detail but the good cop,bad cop routine of every chancellor and PM will continue.

MW: Other stuff wasn't bad though.
As an extra for LVT the rates for 2010 are coming in. My business rates are up 35%. Un-F**in' believable. When I asked is this some kind of joke as in the middle of a double dip downturn its not very funny, the valuations replied all valuations had been made at Jan 2008 values. The top of the bubble vs the reality of the bottom. How can a business stand a 35% increase when it is making LESS money.

Measured:
The big bang and explosion of colours of Brown's super policy firework rocket quickly fades leaving the owner feeling, well it was good but it was over quickly, and wasn't it expensive.
Meanwhile Cameron's Catherine wheel continues to turn in the thoughts.

BE: I didn't like that alcohol speech much. Who was that again...

SW: Yep. Same here . July/Aug/sept all _+. Oct is going to miss by around 10% on current projections.
October 2008 was the rally last year though. Its Nov that will be interesting. See response to MW re business rates too.

LFaT. Agree. Seen your bit about the use of family in politics. It works for GB with his gang. He was foolish to have said what he did about never using family.

@SW - Double dip here we come 2010 will be nearly as bad as 2009, maybe without the Q1 collapse, but will be overall negative growth again I fear - unless a hyperinflationary bubble pops.

Bill:
Sorry not quite understanding. Are you suggesting Cameron's appointment was wrong. It was certainly mishandled but I think that was due to leaks rather than design.

There was a lot of praise for what we want - but no judgment of what we don't want.

It's what has been left out that bothers me. He hasn't the balls to say things like:

This man does not have the balls nor the gravity to be able to do what needs to be done.

Nothing on banks, but have you seen their new "Regulation in The Post-Bureaucratic Age" policy document?

there's some good ideas but it's hardly revolutionary stuff, in fact a lot of it is a re-hash and rebranding of things the civil service and their quangos have been doing for the last four or five years under Labour. You can tell they have been talking to the Mandarins.

I might even set up my blog again, and give it a good fisking for you all over the next few weeks.

EK ? Are you sure thats what you mean?
Nearly 1/2 the country is divorced. That's 25%, on a rough guess, of the country at any one time as single parents.

Steven L.
Be sure to send it over to CU if you do. I'm sure he'll find a spot for you to publish.

Bill - that figure (50%) in itself is a travesty. Are we really saying that 50% of adults that enter into marriage have such poor judge of character that their partners are so awful they need to divorces ?

Or is the truth utter selfishness which is allowed by a non-judgmental society ? I think this is more likely the cause of our single parenting crisis.

Divorce needs to be stigmatised again.

Yes. That's what I mean.

I'll have a crack over the weekend BQ and let you guys know how I get on, if you want to plug/link and share some thoughts you're more than welcome.