Waiting for Greece to be or not to be 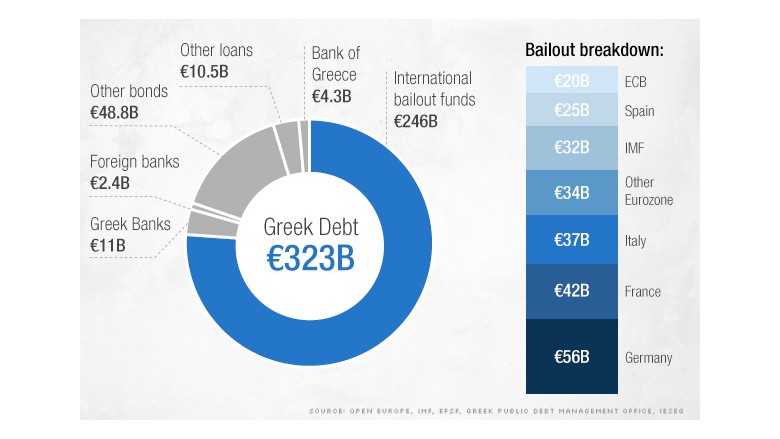 An interesting week watching what will happen in Greece. As ever, the markets move as if it will all be completed in a late-night stitch up on Thursday. All will be well in time for Saturday and the US has chipped in to say don't drop the ball and cause a crisis (irony alert - Lehman Brothers).

Meanwhile, perhaps for domestic consumption, the current Greek PM claims that all is not well and the international community are being big meanies -

So says Tsipras, but who knows what he really means. What we do know is that the group of international lenders are being intransigent. There is no reasonable way that Greece could ever get its public debt back in order without a large write-off. For political reasons, the Germans don't want that to set a bad example for others. Also, as much as the Greeks hate the Troika they don't want to leave the teat of the EU.

The Greek Government was elected on a populist lie, a fine tradition in the failure of Greek politics, which it cannot deliver.

So either we will get -

- Greece forced by the EU and IMF to concede to endless Austerity. With no choice Tsipras and his Government will have to whip up severe anti-foreigner nationalism to try to dissemble away from reality.

- Greece not agreeing, as Tsipras finally gets the EU cares not one jot for Democracy - a messy Grexit ensues but of course Greece defaults and in 5 years will be a much better place that it is now.

On we go, tick, tock.
Posted by CityUnslicker

The political maths are that they cannot agree to the requirements of the Troika/IMF. Remember the reason the election that bright Syrzia to power was called because the normally compliant ND government would not cross the red lines on pensions*. So it is even amongst the very corrupt two parties who have held power for the last 60 years or so. [the last part of that sentance sound very much like the UK anyhow ..]

The politcal maths are such that Tspiras cannot keep power without the "leave the Euro** faction". There will be no deal, there is not the time or the money.

I see there is the opton in the IMF rules allowing the rollower of payments - which I thnk was triggered in teh 70's by Zaire or someone similar so there is rule and precedent.

The economy is once again in decline and the bank run wont help.

* Pensions in actually low in terms of cash EU, the talk of big pensions Now when there is no money, any payment may be "too much", but the justfication of Fat pensions is political sleight of hand from the Austerians to their own ineral audiences.

**Remember there is no actual clause allowing a country to be ejected from the Euro, nor is this a removal from the EU. I see many people getting flabby on the meanings.

Is this the first game of chicken in history where both sides actually want the same thing? Namely to stay in the Euro.

I know that the Germans are tied up in all sorts of legal and electoral problems that prevent them giving the Greeks the money but, forgive my ignorance, is there no way an outside force like the US can fiddle this? Obama seems very keen on the Greeks not leaving. I keep expecting some naughty deus ex machina from him, via some complicated legal hand-waving to allow the Greeks yet another (temporary) loan to push the can down the road. Again.

Austerians. A Krugmanite in the Capitalist midst!

The problem is not "staying in the Euro" or not. Any country or individual is free to adopt the Euro as its or their currency. The UK could adopt the Forint if it chose to.

The question is what sanctions would/could the dreaded "troika" impose if Greece defaults?

The ECB can't force Greece to set up its own new currency, but it can cut Greece off from the central bank's facilities. The Greek economy and government may begin to miss those facilities rather quickly, and wish to set them up quite quickly after a default. Or maybe once the debt is cleared Greece will simply stay in the Euro gold standard and thrive...

The other EU governments are hardly likely to give Greece an easy ride, because electorates elsewhere will take note and elect bonkers governments.

What is so sad about all this is how predictable and predicted it was.

Will the EU ever work? Can the unproductive south keep pace with the productive north without massive transfers of capital?

We either have a 2 speed or 28 speed EU - or simply eject those that can't or do not want to keep up.

haha BE - it is a nice pun though you must admit.
I would be an Austrian rather than an Austerian if I had confidence that the money was sound in the first place. As it isn't we're just arguing over second best outcomes. This is of course before we get onto the very likely false predicates of certain theories.

Indeed what sanctions is the pertinent question, as this really is politocal economy rather than economics. It is interestng to see the spplits between giovernments and people on this. Especially wrt to policy and corruption - Ireland is an interestng case.

The talk of sanctity of contract often brought up in discussins of this crisis is hyperbolic bull.

Anon -The USA managed to keep the unproductive south in a union with the productive north.
The northern states, before the big war, had 9 times the manufacturing of the south.

BQ - Quite agree and the way the US manages the strains in their union is exemplary. As someone explained it, they allow population flows to balance growth hence Dakota is almost empty.

So if the fast growing north needs skills available in the south (hypothetically) why can't there be a free movement from south to north of people. Or on he other hand (and hypothetically) a transfer of capital north to south to kick start growth and employment in the south.

We then get into the thorny issue of intra-European migration - or as a guy at Nato explained, if the Romanian mafia has Humvee's and their police Skodas, there is a case to invest in the Romanian police force to stop people/drugs/nuclear material coming over to Bavaria.

The US can manage these issues as can the BRIC's as they have a coherent union. Europe does not and does not appear to want one.

Well, quite. The Euro was supposed to force Europe to act more cohesively. Unfortunately, surprisingly enough, the richer countries do not seem to want to accept the required financial and population transfers.

It also doesn't "help" that it isn't as easy to migrate as it might be, even with open borders. Pensions, taxes, etc. get complicated, discouraging people from moving for short periods between EU countries.

Hovis, for once you and I agree! It is a clever pun. I also agree with sound money, although I think that Austrians put too much emphasis on fixing money rigidly. Maybe I am more Australian than Austrian?

AT least no one here is advocating Magic-tree Monetary Theory today.

Well Euro monetary policy probably ought to be much looser than it is, and QE (if that's what you mean) is not inconsistent with sound money under certain circumstances, but looser Euro-policy would not solve the longet term problems with the Euro and the EU.