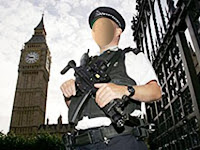 As is well known, ‘security’ is the last refuge of the scoundrel hoping to wrap himself in the flag and command unthinking, unquestioning all-party support. Today’s National Security Strategy shows all the signs of being drafted by a clever Civil Servant (typos and all: to spare their blushes I will show them where they are for a small consideration).

But some how it doesn’t ring true. Take, for example, the Guiding Principles. I quote

2.1 Our approach to national security is clearly grounded in a set of core values. They include human rights, the rule of law, legitimate and accountable government, justice, freedom, tolerance, and opportunity for all.

Unless we have to ‘do business’ with people who see things differently, in which case we will roll over and hope they tickle our tummies - & not with the bayonet. Oh, and get Goldsmith to change his Opinion again, while we're at it.

2.2 We will be hard-headed about the risks, our aims, and our capabilities.

And how’s this for hard-headed ? We invent the risks (Saddam’s 45-minute WMD’s threatening ); we exacerbate them (by prodding faraway people with sticks) and we overstretch our resources to breaking-point and beyond, dreaming of an empire-scale military capability that last existed in the late 1940’s

2.3 Wherever possible, we will tackle security challenges early...the way to reduce the security consequences of issues such as climate change and rising energy demand is to take the tough decisions now to tackle them.

Unless they appear to be expensive and/or will not materialize in the life of the current Parliament, in which case we will hatch grandiose plans, and do precisely nothing. But then again, we only said ‘decisions now to tackle them’, not ‘decisions to tackle them now’. Haha ! Sharp cookies, these Civil Service strategy-drafters !

2.4 Overseas, we will favour a multilateral approach.

Right up until the UN declines to pass the Resolution we want. Then we’ll ask the where & when to turn up for the next big adventure. Come one guys, two countries, that’s ‘multi’, isn’t it ? Get Goldsmith over here again ...

2.5 At home, we will favour a partnership approach. Traditionally, the Government has been expected to deal with the threats and risks to national security …

But we are rather hoping to offload this burden to Someone Else, and particularly in ways that are off balance-sheet

2.6 Inside government, we will develop a more integrated approach.

Well now I think about it - we won’t. I mean, we know BERR (formerly DTI) is trying to get energy costs down to keep our industries in business, whilst DEFRA (formerly BEARDY) is ecstatic about high energy prices because it will force everyone to give up using energy – but, hey, competing viewpoints are healthy for the battle of ideas, no ?

2.7 We will retain strong, balanced and flexible capabilities.

Sorry, as a former soldier my will-to-fisk has deserted me at this point, we are in a realm beyond parody

2.8 We will continue to invest, learn and improve to strengthen our security.

I am not making this up, you know

That deserves a wider circulation. Can't you sell it to the Mail or something?

Thanks, chaps. Spread the word, grandad !

They are trying to re launch brown but thats impossible.

Sorry to be rude but that old saying comes to mind, "You cant polish a turd!"

Except, I rather think it would be possible to polish a turd.

And by polish I mean make shiny, rather than make it so that it originates from that country that is such a good highway into France.

Good fisking, but have you not missed the main point? The main point being, of course, that by and large this country is under no particular threat from anybody or anything.

Sure, these Islamists terrorists have to be dealt with somehow, the same as we dealt with the IRA. And there's no such thing as MMGW. The house price crash and credit crunch is a bit of a bugger for some, but we've always had these cycles and always will (until we introduce Land Value Tax).

But an authoritarian-but-totally-incompetent government needs to stoke up a Climate Of Fear, fear of what is irrelevant, so that is what they are doing.

They're going to sell off the drill halls and offices of the Territorials and reserve forces. Centralised efficiency - privatised profits.

Mark - if you read the NSS doc, there are some threats mentioned there we would do well to think about carefully

e.g. international crime, and mass migration triggered by disruptions of all kinds

(for completeness I will disagree with you - again - on MMGW !)

HG - there are some splendid Drill Halls that should truly be preserved, for every reason

but I have to say that one can point to some quite intelligent sales that have been made of crumbling buildings on prime sites, using the money to build excellent new facilities

and BTW this is done by the 'TAVRA', not the MoD

OK, having thought about this carefully. We reduce impact of 'international crime' by leaving the EU (less Romanians) and legalising drugs & brothels, which will free up police to concentrate on real crime and undesirable immigrants.

What 'disruptions'? 75% of the world's population lives in Islamic, African or Communist hell holes run by thieves. Things can't get much worse for them (poor buggers) so the number of people around the world who'd love to come to Europe, ANZ, Japan, North America could hardly be higher, no matter what happens.

What 'MMGW'? Have you been outside yet this year? Even if true, so what? More people live at the equator than the north or south poles. Warm is good!

Look at my face. Am I bothered?

This NSS is primarily about politics. Its the bit of white paper for Gordon to waive as he gets of the aeroplane guaranteeing us peace in our time.

It will actually make security harder as politically unacceptable risks will have to be ignored by the state as the process becomes more visible.

The prime purpose of this government is to stay in power and gather up the perks of patronage for itself. Its prime method is to assert facts - and to prevent evidence to the contrary from coming to public attention ( ably assisted by the BBC ).

The largest security risk to this country is invasion of our territory by Argentina (our air space is violated, ships come on threatening courses and there may be evidence of special forces landing on the islands) and the colonisation by cultures that seek to dominate rather than integrate. What are the odds of those making Gordon's security list ?