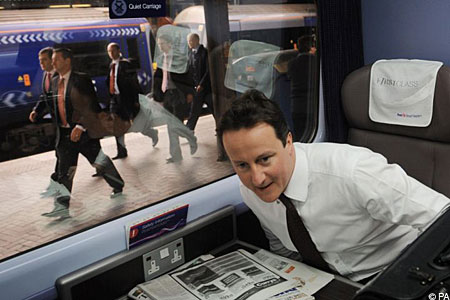 This post runs is also to be found at Political Betting:

Even as the rumours of an imminent challenge to our glorious Prime Minister fade, there is still a good chance of an election before May 2010; No doubt Tory central office is preparing for this and, hidden from view, may even be preparing a manifesto.

The mantra 'It's the Economy, Stupid' is going to hold firm for the next year or two as the UK economic situation worsens, recession or no recession.

But the real hard choice for the Conservatives is what to offer the electorate. The party faithful expect tax cuts and indeed with the burden of taxes at a historically high-level and growing public dissatisfaction with the Government spending splurge, they will think they have point.

However, remember 1979 and Margaret Thatcher, taxes had to go up in the first term. they did under the last 1992/7 Tory government too. A ruined economy needs sorting by whoever is in power.

The economic inheritance from Brown and Darling is likely to be a poisoned one. The official government PSBR is not too bad, but this is from a time of plenty. With tax income due to fall as profits disappear from banks and the services sector, this situation will get worse. The benefits claims will surely increase with higher unemployment. Stamp duty revenues will fall along with the slowing housing market. The huge PFI debt will also begin to weigh more heavily, as will over time the cost of gold-plated public sector pensions as more civil servants start to retire.

Overall, if anything taxes may need to rise unless we have massive spending cuts. Can the Tories campaign on this platform - the truth is they have no other choice, but will they say it? Also what can Labour do in the face of the same problem, promise a Tory-lite or ignore economic sense and retreat to a socialist utopia? And even the Lib Dems need to come up with some ideas?

How honest can politicians be and how much would electoral dishonesty hamstring the next Government to the point at which it became a one-term wonder?
Posted by CityUnslicker

Who's afraid of 'spending cuts'?

As anybody who looks at this well knows, there's at least £50bn to £100bn of pure waste every year (in particular the quangocracy, but general sloppiness in State acquisition and provision of 'services' comes on top of that).

And some taxes are way past the top of the Laffer Curve (in particular Employer's NIC and VAT), so you could reduce or scrap these (having left the EU, of course) and still only be £50 bn down overall.

That'd reduce PSBR to about nil as well. Problem solved.

1. In principle we are for low taxes but above that we are for a stable economy, which needs to come first

2. There is likely to be two more budgets from this Govt before we get a general election, which means that the economy is likely to be even more fucked than it is now come the GE

3. It is therefore impossible for us to make detailed pronouncements at this stage on what we will do on taxes and spending, but you can be sure that sorting the mess out will be our first priority, once we've seen the books and worked out how bad it is.

4. (As you say) it is probable that there will need to be a lot of belt tightening as we put in place the measures to sort it out cue Mark's comments.

5. We beleive that health care should be free at the pint of delivery (Repeated ad nauseum and not even when asked as the NHS charging ghost will be Labour's main weapon in any GE)

I agree with Simpleton: Cameron should be frank with the electorate. He should say: these are the problems we face and this is how we will deal with them. I think the electorate knows that we have been living on borrowed milk and honey and that belt tightening is now the order of the day. The worst possible outcome would be to promise early tax cuts then cancel them immediately after taking up the reins.

pulling teeth out of a stone?

MW - Yes but remember, an honest government would add in the PFI debt and all the other off-balance sheet spending commitments; and look at a way to account for public sector pensions more realistically.

Even with your, achievable, suggested cuts we are still a long way from safety!

So, an election to lose rather than win, then. Or another national government?