Buisness to bail out Brown on 10p tax 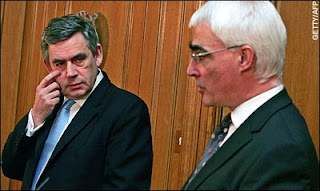 There is some speculation at the moment that the government is putting pressure on the LPC to recommend an increase in the minimum wage. The LPC [low pay commission] is an independent body tasked with setting the minimum wage.
Minimum wage is currently £5.52 and the proposal is a rise to £5.73 or 3.8%.
This is probably a fair increase but the issue is the government wants them to recommend an increase.. because of the abolition of the 10p tax rate.

Raising the wage will allow the government to say that they have made up for the losses people may have incurred, and so don't need to fund those emergency measures for another year, but of course they have not made up anything.

1] The increase returns people to where they were before they lost out. Hardly a pay rise!
2] It is also a pay rise for everyone whether they were winners or losers under the 10p tax disaster and u-turns. Over compensating again.
3] Employers have to find the money, not Gordon and the Treasury, so a big boost for government coffers.
4] As employers and employess pay national insurance contributions of 23.8% (11% paid by the employee and 12.8% by the employer) and employees pay income tax, raising the minimum wage actually raises tax receipts slightly.
5] Insisting employers pay more for staff, during a recession/downturn is poor strategy. Jobs will be cut, they can't not be.

And, of course, it is not for HMG to ask for anything from independent bodies.
They are INDEPENDENT.
But that's unlikely to stop them asking..
Posted by Bill Quango MP

The conduct of 'independent' bodies in the current climate is a huge cause for concern: HG has asked if we can write on nuc permitting, and it's not forgotten ...

Very slick. Why not just increase the minimum wage to £10 an hour and Hey Presto! No More Poverty!

You are right BE.
Some of the opposition to minimum wage in the first place was that it would be used by governments to buy votes.
Its only the brake of being a large employer themselves that stops them from doing exactly what you joke at.

I don't see pensioners buying this one, and "good guys" like Frank Field are sure to kick up a stink too.

Still it should take Brown's poll rating a couple more ticks down towards zero, so at least some good will come out of it.

Rwendland - it sounds more like we should be taking full advantage of our competitive edge!

Besides even I get something like 16 quid an hour - who of you eminent fellows would work for 5.80 an hour?

NMW will have to go up by a big whack to maintain a differential with benefits. They, benefits, will be going up by 3.5 – 4% as they are reset each year against RPI and we know what is happening to that. In truth, benefits (and NMW) should be raised by 7-10% because to the recipient’s greater sensitivity to components which are going up the fastest. A 4% raise in benefits/NMW means a drop in an already desperately low living standard.

It is certainly true that people at the bottom of the income scale are most affected by the current inflation, but if the NMW is hiked and benefits too, how will the government persuade the rest of the workforce to exercise "restraint"?

how will the government persuade the rest of the workforce to exercise "restraint"?

I had an idea years ago: fix MPs and senior civil servants pay to a constant figure in perpetuity and pay a bonus linked to GDP so if we have a recession then they have a pay cut. Maybe there could be a way that they could pay money back in a recession. There would be every incentive on those in power to have policies that promote non-inflationary growth!

Only if you work and 82 hour week because the level at which means tested benefit is set.

Such policies will be irrelevant soon, as the recession bites. There won't be many low-paid workers around.