Alistair Darling warms up the unions for Gordon Brown 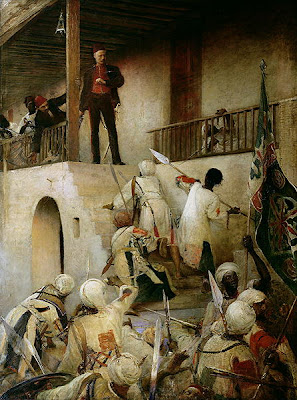 "How did your speech go down at the TUC Darling? Good?"
" Darling, Was it good?"


General Gordon had been advised to quit the city of Khartoum and retreat to reform and rethink before he was surrounded by a very hostile group. Pasha Gordon decided, despite the advice of all his subordinates, his military orders and against every rational instinct, to strengthen the defences and organise the troops for a long siege.

This picture by George William Joy is a stylised romanticised painting of the death of General Gordon. It became a Victorian icon demonstrating the popular interpretation of the Great Leader's heroic death at the hands of the masses.

In actuality Gordon was killed fighting the Mahdi's warriors on the steps of the palace, hacked to pieces and beheaded. When Gordon's head was unwrapped at the Mahdi's feet, he ordered the head transfixed between the branches of a tree "....where all who passed it could look in disdain, children could throw stones at it and the hawks of the desert could sweep and circle above."

Tough crowd. Alastair's warmup speech was not just dull and insipid, but totally uninspiring and received a very lukewarm reception. Better have something better than a 2% pay deal, things are brightening up and help with water tank lagging to say at the dinner tonight Mr Brown, or the Madi's armies will be besieging you again.

would anyone notice the difference?

Both states of Gordonianism are wooden, full of sap and sway with every breeze...

Be fair, if Gordon is "hacked to pieces and beheaded" by the TUC conference, his PR people will tell us that the reception was not as bad as had been widely expected.

And, for once, they'll be telling the truth..