A 'Gaspec' to mirror Opec has long been talked about, and now we have the "Gas Troika" of Russia, Qatar and Iran. Where's it headed?

In case there might be any doubt, Gazprom's Chairman Alexei Miller has helpfully given a steer:

"the era of cheap hydrocarbons has come to an end, and the parties will proceed from this standpoint in their work"

Thanks, Alexei: and didn't you also tell us in June that oil would hit $ 250 per barrel ? And, remind us, most of your hard-currency gas sales are indexed to oil, yes ? Oh, and the price of Gazprom shares recently ..? 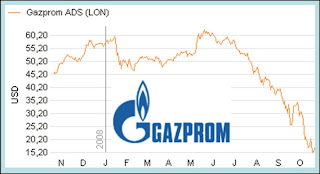 Neither Qatar or Iran will have any undue expectations about getting Russia to observe any production quotas they might propose: not Mr Putin's style at all. No; and he's pretty miffed at being frozen out from the post-Georgia Top Table as G8 deliberations have reverted to G7: no-one seems to want his views on the economic crisis. No coincidence, we suggest, that he's also calling the Troika the 'Gas G3'. Gee-up, there !

But there is a serious point to all this. For a good few years to come, much of Europe is hooked on Russian gas. Collapsing oil-linked gas prices and eroding Gazprom credit-standings will do nothing to help finance the huge capital expenditures needed to keep this show on the road. Germany in particular can expect to be invited to bridge this growing funding gap: by direct investments, loans and perhaps renegotiating gas prices. Italy may get a similar approach.

The Troika may be mostly a vehicle for cutting a dash in the snow. But Russia's need for sustaining high energy prices in the coming downturn is more than a parochial concern, and we may all need to think of new ways through the wintry weather ahead. Christmas candles, anyone ?

I saw this in the news today about a so called Gas Opec, but i think something that has been overlooked so far is that Russia and Iran aren't really in a position to sell gas on a spot market from what i can see. There is still only the beginnings of a spot market for NG via LNG at the moment which neither Russia or Iran as i understand it currently have which would only leave Qatar to be able to sell its gas on a global market like the oil. It would take three years as a minimum for either of them to build a LNG plant from scratch and they would need many more than just one

Further more Iran doesn't supply the same markets as Russia from what i can see via pipelines, so neither of them really needs the other one if they want to raise prices for their respective markets.

I think it would get more serious if they had more LNG producing nations like T&T, Algeria, Nigeria, Egypt, Australia and Indonesia involved than just the three of them. Or alternatively they got the likes of Norway and Algeria to sign up as well as these are alternative supplies of gas for the European market which would keep the price in check.

They would also have to count on countries receiving more of their energy needs from LNG which is going to take a while due to the difficulties in building the re-gasification plants. Until then countries like the States which get most of their NG from internal production or from Canada wouldn’t be affected to much.

So really until I see Russia or Iran coming up with a way to make their gas more mobile and to be able to sell it to a number of markets I think it’s just more talk.

ROTH - welcome & thanks for comments. Response -

(a) Russia does in fact engage in LNG trading - not with its own production directly, but indirectly via location-swaps, and also some outright wholesale purchases & taking gas-in-kind through deals of various sorts

both have plans for LNG plant, but, as you say, it ain't quick

(b) you are right about them serving separate markets today; although they are both potential sources for the new projects designed to feed SE Europe ('Nabucco' and 'SouthStream'). Qatar, of course, is in a position to compete with Russia right now

(c) agree with you about other countries, esp Algeria which really does compete today (and of course Norway). Egypt and Nigeria will do so in the near future

(d) re-gas plants are only 'difficult' to build in the USA, and that's only for NIMBY reasons. Anywhere else, they are a doddle - technically easy and, what's more, people regularly build them more-or-less on spec, (on the back of less-than-50% throughput expectations). Regulators across Europe give them a really easy time.

The bottleneck will always be in the much more costly liquefaction plant, and the very specialised shipping

(e) don't assume the US won't be affected: the basis for new LNG sales out of the Gulf & Nigeria is "higher of Henry Hub or NBP", being respectively the prices at the main US and European spot- pricing hubs. So at the margin, either Atlantic market can bid up the other, which has in fact happened several times in quite a pronounced way. (Amazingly, some cargoes sold to the Far East are also priced on the same basis !)

But I agree that today it's mostly talk - indeed, that's pretty much what Gazprom says! (though all the while hoping to scare people a bit). I see it as a very low-cost option for Russia to stir ...

Mutt - in practical terms, Germany can't wean itself off inside a decade, nor Italy, nor most of Europe south and east of Poland

we are talking outright hypothermia for many thousands of grannies, and hence the fate of lots of politicians

the UK buys only the most trivial amounts from Russia, but we are at the end of some very long pipes, and are by no means immune from indirect impact of Russian actions further along those pipes

Cheers for your reply, interesting to read your comments about it all. Do you ever read "White Sun of the Desert" blog he's a engineer working out on Sakhalin who blogs about oil and gas and particularly Russia. Well worth a read

d) I see it from the opposite point, that it's the liquefaction plants that are easy to build and get the permissions quicker. Like re-gas plants they are build off plan and generally they are in countries like Egypt, Algeria etc which needs the investment and aren't exactly the most democratic of countries so they can override any objections tot hem being built

Look at Brindisei (i think that’s the spelling) in Italy, that’s been held up for over 5 years now from being built while at the same time they are banging their drum that they need new sources of gas etc. so i think it will still be a while again for for the demand market in Europe as well to pick up for LNG.

b)The 'Nabucco' pipeline i agree could bring Iran into the plan , but so far the EU has resisted any plans of connecting them to it. Perhaps if the trans-Caspian pipeline continues to be rejected by Russia preventing Turkmenistan supplying their gas to it then they might have to look to Iran to fill the supply but that certainly won't be by the 2013 planned start date for the pipeline (which i think is unlikely to happen by then anyways).

It would be interesting to see what impact Russia's plans for the Blue Stream pipeline will have on Iran’s chances for getting into the European market. As i have heard doubts expressed whether the two pipelines could both be supported.

but like you said, i think its a good opportunity for them to stir the pot a bit and remind everyone that they're around.

If Russia and Iran where to go heavily into their own operated LNG liquefaction plants, do you think that perhaps if anything it would drive the market down in the short to medium term, as they would be providing a lot more supply that previously hadn't been there.

On a side note, I was at a presentation a couple years back by M Economedes and he was saying that the Mackenzie delta pipeline would have to be built in the next few years or else the price of NG would be driven so low by the surge in LNG into the USA that it would not be economical. He was however banking on their being a lot more re-gas plants and i think he over looked un-conventional gas

ROTH - never read that blog, must take a look

you are right to pick me up on Brindisi - Italy is another NIMBY paradise, where local planning authorities rule the roost & national govt can't easily over-ride (see Hatfield Girl's excellent blog passim [sidebar]); and there is also rumour of hanky-panky ...

The EU is dead keen on Nabucco, it's one of their prioritised 'TEN-E' projects, but it's the US that is trying to 'dissuade' countries from buying LNG from Iran. I can tell you that several big EU-based companies are in active discussion with Iran for supplies, and their governments will most probably support them when it comes to ink-on-contract time

I do not think Russian LNG would drive prices down because, if it comes from anywhere it will be ex-Shtockman, which is otherwise slated for pipeline export anyway; so it won't add net production. A big new source in Iran might directionally ease things, though.

The US has a pattern of taking LNG only in summer, when prices are low, and putting it into storage. Europe bids the price up too high in winter for their liking. I don't see quite that 'surge into the USA' that your man spoke of.