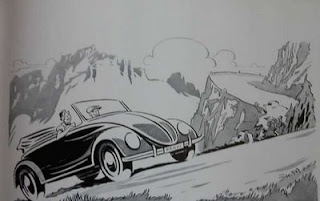 Volkswagens and Autobahns. Spending your way out of depression is the new "big idea" at the Treasury, with borrowing to date reaching £37.6bn - the highest since records began in 1946. The claim is we will even have something to show for it at the end. The NEW DEAL is the New Hope but it wasn't just the Democracies who tried to spend their way out of the depression.
National Socialist big state spending planned to bring a car to every German family and 1,000's of kilometers of roads for them to drive on.

But did the Volkswagen deliver a Nazi triumph? Chancellor Hitler was very upset at the very small number of families who could afford a motorcar in post Wiemar Germany. German families were much poorer than their European and American equivalents and the high cost of imported fuel [mostly through Nazi taxation!!] made motoring prohibitively expensive. Plus the cost to manufactures of scarce materials like rubber made unit costs of cars high and they sold at around 1450 Reich Marks. The price and running costs of a motorcar in 1937 were equal to the entire disposable income of an average blue collar family. Adolf demanded that the motor industry emulate Henry Ford and get a car to the people. The price must be no more than 1,000 RM. The motor industry said it couldn't be done. But Dr Porsche insisted it could and cuddled up to AH. With the stolen funds and fire sale of assets of the old outlawed Labour Unions the Third Reich planned to build a car factory to rival the largest of American production lines. The factory would produce 450,000 cars a year selling at 990RM .

The press loved it and it became the centre piece of Nazism's claims to benefit ordinary hardworking families. Hitler promised to build a cheap car that almost anyone could afford. He gave it the name "KdF Wagen," which was known as the Volkswagen.
KdF was the abbreviation for "Kraft durch Freude" (Strength through Joy).

To buy the new Volkswagen or "people's car" a scheme was set up where a deposit of 5 RM a week was paid into a zero interest fund, with the loss of all monies in the event of default payments or withdrawal from the scheme.. Once 740 RM or 3/4 of the cost of the vehicle had been paid the car was delivered. In addition a compulsory two year insurance policy costing 200RM had to be taken out from Volkswagen. So in effect the purchaser paid the manufacturer in advance to make the car, and then paid the "balance" under the guise of insurance, and still had 250RM to pay after delivery. Still between 1937 and 1939, 270,000 people invested in this scheme. Between 1939 and 1945 another 70,000 people joined too. 275 million Reich marks were taken in deposits.

How many Volkswagens were delivered or collected from the factory before the war's end in 1945.?

{Note .. the factory was put over to military vehicle and tank production in 1940 so very few civilian cars were made during the war. But you have the stats for the maths. Your time begins.......... .... .. Now}}
Posted by Bill Quango MP

well I note that the Golf Mk V is already being dropped because of unsatisfactory sales ...

It was the post-war re-invigoration of the Volkswagen operations which led to its enormous success. For that we have to thank the late Major Ivan Hirst, REME.

If 'thank' is the operative word...

I had a VW once, I must have had the only unreliable one. I now prefer Hondas.

Alright, I haven't googled it, but I suspect the answer may be zero... as the VW factory was fully occupied from 1939 onwards manufacturing Kubelwagens, those dinky German jeeps, inter alia.

But Unsworth, we can't really blame Major Hirst for the demise of our domestic car/truck/motorbike industry. The late Major was a fine engineer & he did a good job putting the Heinies back to work as part of the de-Nazification effort. We put ourselves out of work with a combination of a bolshevik workforce, spanish practices, outdated equipment, piss-poor technical training at almost every level & management almost exclusively comprised of chinless public school-type twats with no technical knowledge whatever. We also pissed our post-war US loans up the wall creating a welfare state & propping up a definct empire.

By contrast the Germans & the Japanese took the Marshall money, invested in machine tools & put W. Edwards Deming's new fangled ideas on quality into effect. And now look at us. Selling cappucino to each other over the internet and producing almost nothing of worth. Of course, no one cared before the banks collapsed. In the present turmoil we could probably do with a more diversified economy, actually making things people want like (say) solar panels (Germans again) or flat screens (our Japanese friends).

Labour & the toffs are equally to blame in this sorry saga. But I am an optimist... we can fix it.

We could start by making science, maths & engineering courses at Uni free and bringing back apprentices. We could pay for it by abolishing the 40 or 50 or so piss-poor excuses for universities that languish at the bottom of the league tables. They know who they are. And who needs media studies fer crissakes?

SW, nuLieBore have spent over a decade hunting down and executing anyone with an intrest in science, maths & engineering.

For an example, look what they did to the freelance IT guys: flooded the market with cheap overseas imports and taxed the hell out of anyone left.

There is no chance of them reversing their policy. Sadly, I don't think the Conservatives would be any better.

HAB, couldn't agree more... I think the only engineers Nu Liebore have any time for are social engineers. As for scientists, Lysenkoism is more their cup of tea, I would say.

I am really angry. I am pleased that the BBC(!) were pouring scorn on the government's plans - switching between "they haven't actually announced an increase in spending" and "there isn't any money left".

The latest Golf is too big, the new Polo is what the original Golf was: compact, economical and quite a decent car. I had an ancient Mk II Golf back when I had a car and it was beautiful.

Gordon now has two aims: to win the election at any cost and to kill the next Tory government in trying.

ND: I had no idea about the golf. But I've never had one since an irrational dislike of them from the 80's when they were the cars of the parents of the boy racers.

Unsworth and Sebastian Weetabix
All those British ideas and inventions from the 50's and 60's that we never followed through on.
Benn and Wilson giving us the "Great White Heat of Yesterdays technology" Still Nuclear power, Hovercrafts and Concord I suppose.
I am dubious that the massive amount of debt built up now will make us anymore able to meet 2010 and 2020 better placed than today.

Ellee Seymour: we are turning into Top gear now. i always prefered Toyota and Mazda but Mrs BQ had a Honda HR-V which was quite fun.

Anon Kubelwagens were the military version of the Volkswagen and although produced in the factory they were not for civilian use.
They were also inferior to the jeep in almost every way.

Be / Hab : We have the lowest level of debt of anyone except Canada because GB paid back the Tory debt.That's why we can spend as much as we like. I heard Robinson tell Paxman so it must be true
{did you hear Redwood tell him to stop lying. He looked most surprised ..you'd have thought he'd be more used to hearing it.}

the Golf MkV hasn't been 'dropped' because of unsatisfactory sales... one of the hardest cars to get hold of over the past year has been a Golf 1.4 TSi... they haven't been able to make the engines fast enough due to demand (turbocharged small engine = low road tax, low fuel consumption, quite big power)

it's been replaced by a new model because they complicated rear suspension on MkV was costly to produce and so VW have found a way to make building the car cheaper per unit...

Just for clarity, I'm not decrying British enterprise and/or industry.

I'm just decrying the fact that we have neither any more.

Hirst did a splendid job in getting VW off the ground. It's a huge pity that his talents and energy were not recognised and applied to business in the UK.

I do have a sneaking feeling that we have lost our sense of national and personal pride. Time was when we were convinced that our skills, engineering and character were more than a match for anyone or anything. Now we seem to have become 'consumers'.

And, as an aside, we have lost the concept of apprenticeships altogether. That system did two things. It taught the callow youth how to do the job decently with a sense of craftsmanship, and it also taught young people about the realities of life and humanity. GCSEs? So bleeding what? It's attitude, not paper, that counts.

Mark Wadsworth / Sebastian Weetabix
Correct of course. None were delivered and all the money paid in was lost at the end of the war.

The lesson though is that even without the war the project was hopeless. To get even close to building a car to sell at 990RM the VW plant needed to produce cars at a rate of 450,000 per annum. More than twice the 1938 output of every car manufacturer in Germany. Seeing how only half that many had contracted by 1939 there was never going to be the demand. If only 250,000 had been made, still more than the market available for them, the average cost per car would be 2000RM. A net loss for the state of 1,000RM / car if sold at the official 990RM. Opel were already making a family car that sold for 1,500RM.

At the end of the day in a survey of the 300,000 people who took up the offer of the Volkswagen payment scheme only 5% were considered from HARD WORKING FAMILIES.The rest were from the top strata of society.

Henry Ford sold many cars by increasing his already generous workers wages in the Depression.
With the fruits of their labour they bought his motorcars.

sammy, I only know what I read

another interesting Golf fact: the MarkV GTi (4 x 4) weighed twice as much as the original Mk 1

(source: J Clarkson - so argue at your peril)