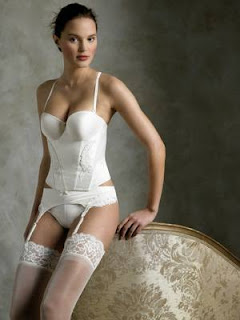 Robert Peston has had a good look at M+S today. Many other commentators are having a look at them too with radio programs devoted to them. A big British company with a big profile and a bit of "The People's Retailer" about them, invites plenty of discussion. Lots and lots of people chiming in with where M+S has gone wrong..over priced, weak quality, frumpy fashions,poor service,failure to attract a young audience, lost their USP, too few checkouts etc. Well, maybe. The fashion was certainly not good enough as those fashion figures show.

M+S were first to be hit as sales slowed. Nothing new there. High end retailers are always hit first...People cut luxuries and curb their more expensive and extravagant habits early. We mentioned the churn effect of shoppers dropping down a brand back in April. M+S is cutting 1200 jobs, but more importantly, axing 27 stores, mostly their Simply Food shops. Clothing took the biggest whack 6.5% down compared to food 1.1% down. The fact they are closing stand alone Food Stores demonstrates the thinking in the boardroom that food sales will decline further in 2009. Some are delighted that its just 1200-1500 jobs out of some 75,000,just 1.5%, hinting that the worst is over and retailers are now safe, having survived Christmas. Next and Debenhams better than expected figures boosted their share price. The bad times are over?

That should be a wildly optimistic view. The effects of the economic crisis didn't really take hold until October.Earlier annual trading helped keep profits up. There is worse to come. As Peston again mentioned yesterday, it will be levels of debt and access to credit that is important in surviving 2009. Some won't even make the journey to the Rapids of the sterling devaluation and the increase in online sales that is waiting for the summer survivors.

M+S is taking the first necessary steps to reduce debt, lower costs, cut the wage bill, chop waste and generally prepare for the dangers ahead. They won't hesitate to take further, more aggressive actions in the future. Expect more closures and more job cuts later on. After all no boardroom wants to do a Woolworths..
Posted by Bill Quango MP

There's a "Simply Food" store in the small market town near my rural retreat. I wouldn't be surprised if it closed: the stock is overpriced and aimed, really, at urban customers.

And yesterday I visited a bigger M&S, in Winchester. The experience was not a pleasant one. All the old complaints about them losing their way are rightly being rehearsed; I suspect that Stuart Rose is not quite the retail genius that he is painted.

I also went into BhS, where the stock was better displayed, the lighting much better, and a general air of competence reigned. I wonder what would have happened if Philip Green had taken over M&S, after all.

Not the usual description for Woolworths and Adams?

Everyone is hit anon.Its just a question of hard. And how strong the jaw is to withstand the punch.
The weakest topple over quickest.

Look at M&S Simply Foods vs Tesco/Aldi/Lidl for food sales.
Tesco and Morrisons are enjoying a boom..where did those customers come from I wonder?

I will never shop in M & S again...they searched my girl in full view at the entrance to the store, making her miss a (non refundable)coach. Her suspicious behaviour? Hurrying out of the store to catch her bus, ...I didn't think they searched people unless they had seen them shop lift, and even then I thought they did it in the manager's office. Bit up themselves and a bit previous, you could say. (I worked there once. They assume their staff will steal. Nice.) I really don't think it is a good idea to treat your customers as thieves.

Very bad CM service Lilith, and unusual for them. They have a good management training scheme and employ a good age range and have more than the average amounts of 5 years+ service staff.
An overzealous new supervisor?

They do assume staff will steal because 50% of ALL retail theft is internal. The pure numbers aren't; that is there are a lot more shoplifters than shop staff stealing, but a rouge cashier at a checkout, under ringing cash sales could easily net £50,000 - £100,000 in 3 months.

On the point of your girl again, my niece was once accused of shoplifting, detained by the manager and told she might be arrested.
This particular chain of shops was owned by her Grandad!
Silly, silly, manager.
{this manager was later dismissed for shoplifting..}

Lils, the cheapest sandwich I bought in M and S today in Tunbridge Wells cost a quid!

How desperate are they to get an old idiot in there for a late lunch between meetings...

I'd buy you a proper lunch (BLT) there Lils, but we'd also get a few bottles of Chateau Avranche Grand Cru first, then buy a huge rug in BHS, then collapse in a heap on Mt Ephraim, then wonder how to get home when all the buses had stopped for the night...

FaGodssake don't tell Elbs; his hip will go about three feet outwards and cause a small deprivation of balance in a small town on Somerset, and I'll get the blame...

Scrobs, it's a date.

Bill, I was shocked, as was my girl, and the manager is going to hear from me.

(They tried to recruit me to management but the thought of working all those Saturdays....and wearing M & S fashions...the horror!)

"Look at M&S Simply Foods vs Tesco/Aldi/Lidl for food sales.
Tesco and Morrisons are enjoying a boom..where did those customers come from I wonder?"

How does any of that explain Waitrose's success? And although Tesco are yet to announce their figures they are rumoured to be "disappointing". Aldi and Lidl's growth is static in their established branches and their growth is purely fueled by their expansion. I expect we'll find that Morrisons appear to have succesfully overperformed at Christmas for the second year running.

Aldi are saying 30% increase year on year.Lidl were 12% in August.

That's what I was alluding too.
Waitrose had a huge spike Xmas week, some 40% up, but they won't see the likes 15% overall growth.
Its hard to tell overall figures as John Lewis department stores are dragging the group down.
Which just reinforces the point about more expensive retailers suffering first.

But lets not get into a war over it. You put your money into M+S and John Lewis group, Debenhams and Next and I'll put mine into New Look, Primark, Poundland and Asda, and whoever has 2 out of 4 showing a profit by 3rd quarter can claim victory.

Dearieme..
well spotted. i meant, of course, to write, lippy cashier on a foundation course.

I'll bet Restaurants are suffering too.

May I humbly suggest that if M and S changed their name to Moulin Rouge and sold the appropriate fashion goods to match, they would probably make a lot of money.

I always believed Stuart Rose had lost the plot when M&S embarked on that environmental nonsense. No understanding from Mr Rose of the humble lower middle class consumer who doesn't give a flying f*ck about the environment and just wants good quality stylish clothes at a decent price.

Probably the fee they paid Twiggy to advertise their clothing range would have paid staff salaries in at least one store for a year.

The food hall is good though. It is the only decent place to get food in Stoke city centre, apart from the health store, which obviously only sells certain things. You have to go a ridiculous distance out of the city to get to a decent supermarket, & there are simply no independent stores that aren't completely shite.

They could find a niche selling decent fresh business in areas where Waitrose wouldn't deign to locate themselves :)

You can actually get much better shopping in a reasonably sized market town with a farmers' market. But I wouldn't be surprised if Marks, & Waitrose, were still going in a few years.

How come M & S are abandoning Market Town England just as Tesco forge ahead with Tesco Express in suburban High Streets and villages ?

Dennis. BhS have made great improvements over the last few years.
They have halved their debt to around 60 million so maybe "well Placed" for when the recovery finally begins.

AntiCitizenOne: I guess. Our main very pricey one was maxed out all over Xmas though..so?

Asquith: you can get things at a farmers market, but they are hardly convenient.Some are quarterly! I agree on M+S food. They are being hurt on price, not quality.

IEBOC:
Hmm..me too. Closing the big Woking one in the Peacocks centre is no surprise.
It was a dog and they have a huge retail park site shared with Tesco, just a few miles away.

Was in Sakura for Lunch today. Absolutely packed! (But the Yen is strong and it was mainly packed with hungry Japanese). No Credit Crunch here.

AntiCitizenOne.
if you look at the photos that graces all the big print media on the 27th about record boxing day sales you may notice the distinctly tourist look to most of the London pictures.

Weak currency could be a boon for the Marble Arch end shops who rely on tourists for 50%+ of business.