Obama day - no way up from here 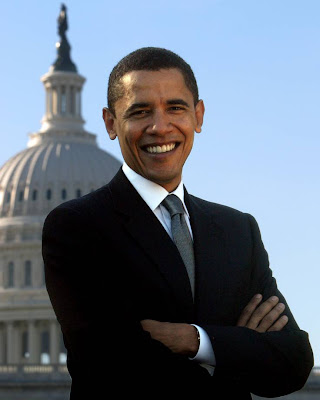 After the share price crash yesterday today will be the turn of an Obama rally. Perhaps, however if there was a market in Obama shares now would be the time to sell.

After all, the City mantra goes 'Buy the rumour, sell the news.'

Obama is being feted everywhere in the world in all media, full stop. I have read nothing for days that is not positive. I wish him well, but by pure logic alone, this must be the high point. How could he get more popular?

He has a truly dreadful situation to inherit which is not going to be fixed with a fine speech and a wand. The US is also entangled in expensive long-term wars abroad which it can no longer afford.

Obama has appointed a select bunch of team Bush and team Clinton. This suggests continuity not revolution. So more of the same we have had until now.

There are many comparisons to Tony Blair here I feel - also elected on a wave of spin generated euphoria.

To end, the political mantra: All political careers end in failure.

UPDATE: Well the speech sets him up nicely. Lots of fine words while studiously avoiding subsance. Not even a tiny micro-bounce in the DOW or S&P.
Posted by CityUnslicker

Oh well let's get in first.
" Barak Obama ? What a tosser he was, all mouth and no trousers, mate ".

A chorus of "Things can only get better"....

I wonder which 3rd world(us maybe) he will bomb first?

There are important differences: Obama is clever, hard-working and reads books.

African-Americans in particular have hugely hyped up their expectations of Obama, and I fear they will be cruelly disappointed. I reckon he'll get a second term, though; he's an astute political operator, and you can be sure as far as he's concerned the 2012 campaign has already started.

He is only a politician after all and we all know about THEM don't we?

All political careers end in failure?

Try telling that to Ken Clarke!

LFAT - he is not leader is he!

Sackerson - it is not his intelligence I doubt, it is the circumstances he faces.

All- My post is to say the over-hype has done him no favours at the moment. I hope he does succeed as the world desperately needs it.

I think I would have voted for Obama, but I think a lot of people are going to be very disappointed. People seem to think that he can cure America's ills. Everyone has projected their own personal hopes onto him. He is being feted as some sort of second coming!

He hasn't helped by hyping his post-election tour and pre-inauguration rhetoric. He should be managing expectations not blowing the bubble up even more.

I hope he does well, but he will never be able to half the things which are hoped for.

It will be a long way down.

It's a nonsense for anyone to believe that Obama has the answers, but his arrival is the one opportunity that America has to make radical changes. It's not the function of a successful President to deal with detail. His role is to lead - a very different task.

In any event, such changes would certainly not have occurred under the Bush and Republican regime - whose main aim has been to maintain the status quo. Whether Obama manages to enable changes is to be seen, but we can be sure that this is America's best shot - and the world's best chance.

Obama is an advocate of the bailout policies of the last few years and will pursue them with even greater vigour, backed by a Democratic congress which thinks likewise.

Such polices will increase American indebtedness but have negligible positive long term impact on the state of the US economy. Reserve Currency status notwithstanding, the dollar will soon face a crisis in confidence resuting in its rapid depreciation as the American Govt increasingly finds itself unable to get takers for the debt it will need to build up to fund its innumerable bailout packages. Increasingly foreign creditors will turn away from America as its creditor status tumbles, the inflationary risk in the American economy burgeons as government debt is increasingly monetised and they (e.g., China, Japan) look to heal their own national economies.

As a consequence of the above the recession will be protracted and drawn out. Mini booms may well occur. These will give succour to Obama/Democrat supporters, apparrently strengthening their hand. But such booms will pass in the night, the main emphasis over the next few years being the further deterioration of the American economy.

But Obama's star will ocntinue to shine because, simply put, Bush will be used as a scape goat for years to come. I accept Bush did great damage to the American economy. Likewise he damaged the reputation of capitalism, even though the principal cause of this crisis was government intervention in the economy (i.e., price control thru the Govt's/Fed's interest rate policy after 9/11). However, the point is that Obama's policies of "bailout, bailout, bailout" will not adress the issues that need to be addressed - i.e., the need for more saving and investment and for the "creative destruction" of those malinvestments that the credit boom of the last 8 years produced.

Didn't Obama only just win the election, when measured in votes? It seems the (largely liberal) US media are treating him as the Messiah in flagrant disregard of the opinions of half the American population. By setting him up on such a pedestal they ensure he has a very long way to fall - and fall he will.

Obama really should have cruised the US election given the GOP was in such a mess - the fact that he didn't seems to suggest that many US citizens are not as convinced as the media that he is "all that". They might not be prepared to give him the benefit of the dubt in 4 years time if he hasn't achieved very much. They are more astute than the average Brit when it comes to spin. They have, after all, seen that kind of thing before.

The main aim of Bush may have been to preserve the status quo.

However, from what we have heard so far such will be the aim of the Obama Presidency. What else is a multi billion (trillion???) dollar bailout package but the preservation of established interests?

"Bush will be used as a scape goat for years to come."
Certainly - isn't that the game? Do we not see that routinely in British politics with Labour constantly blaming Thatcher for all the ills of society? On the basis of that, Bush will be a useful (diversionary) focus for many years to come.


"I accept Bush did great damage to the American economy"
Well, that's not the only thing Bush 'pere et fils' have damaged - by a long, long way. Given that, it's difficult to imagine anyone doing much worse.

not an economist - I agree that having seen the Obama team more of the same is likley. It will be dressed up differently.

He is America's Blair. All piss and wind and the shallow gift of charisma.