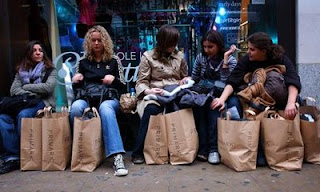 Marks and Spendless a post from back in January about the merits of high vs low end retailers, predicted a further collapse in higher end retailers and difficulties for all except the discounters.

Not everyone agreed. There was a minor disagreement with Anon over who would perform best. Anon commented "How does any of that explain Waitrose's success? And although Tesco are yet to announce their figures they are rumoured to be "disappointing". Aldi and Lidl's growth is static in their established branches and their growth is purely fueled by their expansion. I expect we'll find that Morrisons appear to have succesfully overperformed at Christmas for the second year running."
Ending in my comment;
"But lets not get into a war over it. You put your money into M+S and John Lewis group, Debenhams and Next and I'll put mine into New Look, Primark, Poundland and Asda, and whoever has 2 out of 4 showing a profit by 3rd quarter can claim victory."

Well, I call Primark early. Like-for-like sales, which exclude new openings, increased 5% in the six months to 28 February. Half year profits up 10%. That's on top of the 20% they were up the year before. The margin has taken a hit, but they have finished a new distribution centre that will only make a slick organistation even slicker. Peacock's, another discount fashion retailer reported 8.3% up like-for-like sales earlier this month.
Contrast with Next Plc retail like for likes were down - 6.5% to March.

In a downturn, pick the discounters. They retain their existing customers and pull more from above. Primark's gain is Next's loss.
And need we mention Tesco again? Or have their PR people opened enough champagne for all the positive free publicity they have had today.

Ps the Marks and Spendless post is worth a look if for nothing else but the picture of the model in the M+S bridal lingerie. Grrrr.
Posted by Bill Quango MP

Well, and were Tesco's figures "disappointing"?

No.
Once they get their banking in place they will rule the earth.

I was in Primark the other day, they had a blue silk tie, almost identical to the blue silk tie I paid £20 for and spilled chilli sauce on, for £4! They had some nice shirts for a tenner too.

Having said that I was just in Tesco, and nearly all of their '3 for £4' real ales had sold out. Their stocks of Youngs Banana Bread stuff is surviving the hoardes of bargain hunters, but that's about it.

Still, I stocked up on Carlsberg big time when they were knocking it out at £6 for 15 cans a few weeks back. Thanks to Tesco I won't be going thirsty in the recession.

I might shop at Marks more if
(i) they stopped moving the goods around the shelves,
(ii) they manned more tills so that the queues were shorter,
(iii) they stocked a larger proportion of their wine above knee level.

In fact, as I rehearse these whinges I realise that I loathe M&S so much that if it weren't for their wonderful 99p pork pie, I'm not sure that I'd shop there at all.

I have noticed fewer tills manned at Marks too Dearieme.
But it does depend on which store you visit. Some are fully manned, some are empty.
Fashion retailers move stock around every week. Its how it arrives.

M&S! I'm sitting here right now wearing a cardigan bought from them in 1968. However my dog is sleeping on a Christmas present pullover from that establishment, that has becomes so bobbly that it's not fit for a Spaniard.

Regardless of the merits I don't think you can put your money into John Lewis Partnership unless you work there, it being a worker's cooperative and all.