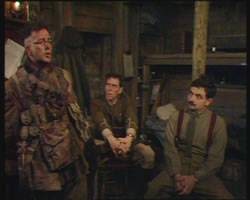 The enemy forces are pressing hard. The Daily Telegraph has been firing heavy artillery shells onto the Labour lines, doing terrible damage to the party. Captain Brownadder and his platoon take refuge in the bunker.
"They're still pelting us pretty heavily sir," said lieutenant Geoff Hoon, withdrawing his head in from the doorway."Moaning Morans, Bouncing Bryants, Moating Hoggs. Its damned lethal out there."

Captain Brownadder sat on an upturned, empty money supply crate and nodded. "Stay away from the door Geoff. How long has this attack been going on now?"
" Since 7 Oct 2007 sir." answered a grubby Pte Ed Ballsdrick," You remeber sir. The day you bottled out of a snap election. That was when the attacks started."
Brownadder shot him a withering look. "I meant 'The Daily Telegraph's' attacks, imbecile. You really are as stupid and pointless as a BNP election broadcast."
"Thankyou very much sir," beamed Ballsdrick.

"Fifteen days now sir. Fifteen long days. I hear the Speaker bought it,"said Lt Geoff.
"Don't be silly Geoff. The Speaker never buys anything. Its all on expenses."
"No sir, its true. Apparantly he was trying to organise a charge against some stolen expenses data disks and got hit by a Clegg. Went off in his red face. And Colonel Chaytor. Tried to cross the taxpayers armed only with a "unforgivable error in my accounting procedures for which I apologise unreservedly" excuse and they found him in no-Mp's land, suspended on the wire."

"Well., its been as bloody as a Glasgow by election," mused Brownadder. "An almightygreat blast of public anger swept through the officer's mess and blew the legs off Captain Andrew MacKay’s re-election plans. Hazel Blears took some of the fire too. She was discovered mortally wounded in a ditch. Next to Shahid Malik's head. And Sergent Elliot Morley's arse. "

"And don't forget those chaps in the RFC,"said Ballsdrick.
"Who?"
"Those Royal Fraud Court fliers who crashed and burned. Lord Peter Truscott and Lord Thomas Taylor. Did a bit of acrobatic ammendments. Tried to loop-the- lobbyists. Went up-diddly-dum-up and down-diddly-crashed and burned."

"Well that settles it. We will stay in here until the worst is over," said Brownadder with finality.
"How about I read some of my war poetry to pass the time?" pleaded Pte Ballsdrick.
"Oh do let him sir. It is really good. Year two sats level at least."
"Well, and with a due sense of foreboding, OK," agreed Brownadder warily.

Ballsdrick stood up and and cleared his throat. "This one is called..

'The election'
Elections are a horrid thing,
Unless we win, win, win.
So to save our skin.
We spin. spin, spin.

"Oh bravo! That was marvelous wasn't it Cap?" exclaimed Lt Geoff.
"Well, it was a bit like a Sir Gerald Kaufman expense claim. It started badly. Exceeded reasonable bounds in the middle, and strayed beyond limits at the end, but on the whole, excellent!"
"I've got another one sir!"
"Oh shame."
"Its called

Right. You and Lieutenant Geoff have both been flipping houses ?"
"Erm yes. How did you know?"
"Because you're flippin' useless. Why don't you wait outside until it all blows over. "
"OK sir. Can we take our patio heaters?"
"Just go" sighed Brownadder, as he slumped down to wait out the storm."

Previously..
The Brownadder tries for a Fourth term
Part 2
Part 3

When can we expect some from Blackadder the second?
Lord FlashMandy
Lord Brownadder
Lord Morley
The MP cuddling archbishop of Canterbury.
The Queen
Jacqui Smith as 'Nursie'
Dave Cameron as the evil Ludwig.

I have now stolen your dogs of war parody and claimed it as my own. Fantastic yet wonderfully obvious.