Some months ago we wrote:

If someone asks: how could an athlete run the mile in 3 minutes?, it is arithmetically correct to reply: by running 30% faster. But this would not be a satisfactory answer.

But it is the answer Ed Miliband gave us yesterday in a suite of some 20 documents, centerpiece of which is the UK Renewable Energy Strategy, purporting to guide us to 80% carbon emission reductions by 2050. The stuff relating to the last 25 years of this period is the merest science fiction (e.g. generating more electricity than now, but all of it with zero emissions), and actually I have no problem with that: none of us knows what technologies will be available then.

It’s the rubbish relating to 2009-2025 that bugs me, and in particular one very specific area. Miliband is looking for some entirely feasible emission-reductions from the two-thirds represented by transport and buildings (heating) sectors, but proposes to turn the screws to a fanciful degree on the other third, Power and Heavy Industry. And here, in one of his handy graphics, is how that 3-minute mile is to be run (click to enlarge):

Note how the really impressive reductions start in 2013. Where do they come from ? Here’s another chart (my annotations), playfully headed “The UK is likely to have sufficient generating capacity” (sic): 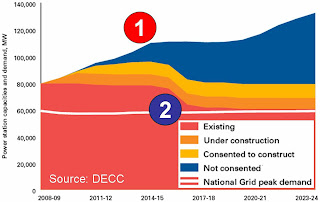 If you look at the accompanying data, the trick is obvious: (1) a massive wave of as-yet unidentified ‘renewable’ power-plants kicks in, starting 2013. This is handy in two ways: first (*fanfare*) it solves the problem of where the electricity is going to come from when (2) the fore-doomed nukes and old coal plants close (see this blog passim), and second, since the lead-time for these plants is 3 years, the fact that no-one can point to them in 2009 doesn’t mean they aren’t all going to start construction next year !

And thus does Mr Miliband propose to run his 3-minute mile. Let’s hope the Tories have something more rational to offer in due course. More tomorrow.

Its shocking Mr drew.
Imagine if you presented data like that in the boardroom..

"Sales will rise by 20% in 2012, allowing us to easily repay the cost of new investment"

And if it doesn't?

Why will it? What example can you give where this has occurred before?

"It will. really. Because if it doesn't..well then the whole thing looks a bit implausible, so.."

This proposal looks like something from the failure team on The Apprentice.

SirAlan
I tasked you with reducing our carbon emissions, and increasing our energy resources by 2050. You haven't done that at all.

Ed.
"SirAlan I gave this 150%.We worked very hard. But its quite a difficult task. Windmills only produce a fraction of coal, and Gordon wouldn't let me build any coal or nuclear plants before 2010..

SirAlan
"I wouldn't have given it you if it were easy.You can't just blame Gordon. Who was in charge of energy and the environment? Margaret what have they achieved?

Margaret
They have reduced emissions a little. But there are no new energy supplies.

Indeedy, this is all cloud cuckoo land stuff.

It appears that an 80% reduction by 2050 would mean scaling back to the emissions levels of 1850, i.e. they want to turn back the clock two centuries.

Is it worth stocking up on tea-lights next time they are on offer in Tesco then Nick?

Steven, probably not. One of the iron laws of C20 politics was: if the lights go out, the government goes out. Even 3rd-World dictators know this one, & I suspect it will hold true in C21

Why can't we just let the French build the nukes and buy all our power through the channel connector?