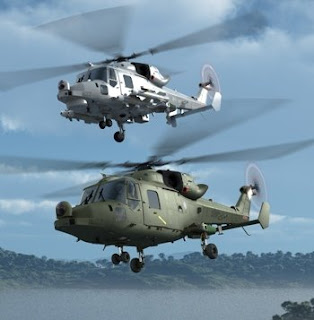 "Future Lynx is exactly what the Fleet Air Arm need to replace their old Lynxes. These Lynx aircraft will need replacement in the next six years", so we should be seeing these in about 2008 by that reckoning!"
Speaking in 2002, the defence procurement minister Lord Bach.

The go ahead to begin designing and building the Future Lynx, now designated Wildcat, was not given until December 2008. Up to then there was a real possibility that the entire project could be scrapped. So just the prototype has been built although critical milestones have been met. The military helicopter will not be in service until 2013-2015 at the earliest.

Future Lynx, in typical MOD fashion, will be a multi-role, multi-purpose helicopter for both the army and navy. It will be able to be a transport aircraft for up to 9 infantrymen, a small cargo carrier, an anti submarine platform, a reconnaissance aircraft, Medevac, and an air to surface anti ship platform.
Critics complained at the time of its announcement that the cost of supporting Westland {AgustaWestland, the Anglo-Italian helicopter company owned by Italy's Finmeccanica} would be expensive, around £14 million a piece compared to £4-6 million for an off the shelf alternative.

A good selection of the arguments for and against off the shelf can be found on this forum
Slightly overlooked though is the fact that the MOD are trying to get one helicopter when it should be buying different types. Our multi role efforts usually mean 'adequate at some tasks, indifferent at others.' Wildcat will be no different. The army wanted a light chopper with good anti missile defences for recon and transport and a heavy one for missile, ground support. The navy wanted a fast agile, modern sensors and ASW weapon load craft that could fit on our smallest frigate landing deck.
If WA can get anywhere near the two different aims, while still being able to fly in tropical and arctic climates they will have done very well.

Normally off the shelf look so much better value to us at C@W. Thinkdefence think it would definately have made sense to buy foreign. However helicopters are one of the few bits of military kit that actually have a very useful peacetime role. Our tanks, fighter jets, submarines, and artillery are useless except for war. Helicopters have uses from flood rescue in this country to food drops in Africa to air sea rescue. Developing a capable product would produce valuable exports. The old Lynx was sold to over a dozen nations in its naval or land based role.
The contract is only for 62 anyway. Of those only 34 are for the army.

Bob Ainsworth talked of the £6 billion spending on helicopters "In coming years" which is just the same current spending and Westland money that's already been announced.
Having a new helicopter fleet arrive in 2014 will be of little benefit to the generals and soldiers tomorrow. In the meantime our existing airframes and parts are being worn out and need replacing.

Bob talked of "huge" increases in helicopters in Afghanistan. A smokescreen for there being many more helicopters in theatre that came from Iraq. Sadly for Bob, the troops came with them too, so the ratio didn't improve. Bob Ainsworth again points out the troops have to get out to fight. Heavy armour won't save them.
Of course troops will die. Many more in an offensive. But there is no need for the blokes bringing up the rations to get killed too, if the bully beef could be flown in.

The real problem today is the one that the Lib dems and Tories are accusing the government of. The £1.4 BN cut in helicopter spending in 2004.
At the height of TWO wars, each with terrain that makes airlift essential, the then chancellor, the current PM, decided to cut helicopter spending.

Liam Fox the shadow defence minister said
"Brown was to blame, particularly when it comes to the shortage of helicopters. That was a Treasury decision when Gordon Brown was Chancellor."

It was Gordon's decision back then that gives him his difficulties today.
Posted by Bill Quango MP

Some Labour twat ( Junior Defence Minister ) on the radio earlier boasting about the doubling of Helicopter numbers; great, from 'not many' to 'not many more'.

Ross Kemp doesn't piss about when he needs choppers.

The only way to get what is needed for the troops is to remove all the twats in the MOD and replace them with a few serving troops that have experience of battle. As long as those at the MOD are far removed from the reality of the situation nothing will improve.

Gordon should not be allowed to get away with this. If Cameron presses him at PMQs, his standard retreat of 'The troops are fully equipped' will fall just as flat as his lies about public spending.

Agreed with Ivan, the MOD bureaucracy needs to be decimated.

LFAT, the list of things GB shouldnt get away with is far too long.

That being said, i can't help but feel this helicopter thing is being brought up just when the screw is turning on the front line. Those poor boys from 2 rifles were caught by a vicious daisy chain IED. Regaining this territory is surely going to lead to further incidents like this. perhaps the political question is who is supplying the know how and equipment to the taliban? And what is the strategy to deter them in future?

According to Dr Richard North, our very own DfID is supplying the locals with 25kg bags of fertiliser - currently the Taleban's explosive of choice.

"However helicopters are one of the few bits of military kit that actually have a very useful peacetime role. Our tanks, fighter jets, submarines, and artillery are useless except for war. Helicopters have uses from flood rescue in this country to food drops in Africa to air sea rescue."

There are so many reasons to invest in these but I'd like to see stats on the longevity of the foreign versus the off the shelf.

I was under the impression that government defence spending was aimed at paying for the R&D effort for equipment that will subsequently be proven effective in the field by a very active Britsh military and then sold profitably overseas. R&D subsidy by the back door.

"As long as those at the MOD are far removed from the reality of the situation nothing will improve."

If you go to the local comp you can join the army cadets and learn to be a squaddie instead. You have to go and find them for this privilege - they won't come and find you.