Thatcher and German Reunification: Straightening Out a Bit of History 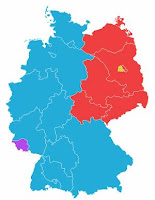 After the release of papers under the 20-year rule there has been much rehearsing of Margaret Thatcher’s initial opposition to German reunification until she was eventually edged into a more realistic stance.

If she was as hostile as it appears, she was staggeringly ill-advised – just as some historians are ill-informed on the same matter. This, for example, from the much lauded (and often rather good) Mark Mazower:

“The reunification of Germany … was as unforeseen as partition had been forty years before.”**

In fact, as soon as it became clear that Russia didn’t have the stomach to hold the ring in Eastern Europe any longer, the Deutsche Einheit was both inevitable, and well-signposted for anyone in the Tory senior echelons who needed to know and could be bothered to pay attention.

In 1985 (sic) I was amongst a group of Conservatives including several MPs, MEPs and soon-to-be MPs, who were invited by the CDU for a lengthy and highly educational visit to both West and East Germany. (There are many amusing stories from this trip but they are for another day.)

We ended up in Berlin where we converged with similar groups from right-of-centre parties across the West. Our CDU hosts – who included some Very Senior politicians – then told us the purpose of the outing. They wished us, as friends and allies, to be in no doubt that their over-riding political priority was reunification, however unlikely we might imagine it to be. We needed to know this because it was vital to understand their frame of mind, and how they would act when the time came.

This seemed deeply implausible to most of those assembled, and someone asked – OK, so when ?

Oh, we’ve no idea when, our hosts replied: but just please be aware that, when the time comes, we shan’t hesitate, or be found wanting.

So - unforeseen it was not. If any of the Tory MPs who attended this event didn’t brief Thatcher’s ministers; or if these in turn failed either to follow it up, or to apprise Herself, then they and she deserved all the unnecessary political grief her ignorant heel-dragging must have caused.

You would have thought that the Wessis would have had a slightly more coherent economic plan then, wouldn't you? 1:1 was a disaster and destroyed any competitive cost advantage that the Ossis might have had and therefore made certain that the Eastern industry collapsed completely.

I remember at the time the wall came down hearing a West German Industrialist say that the convertible rate was 10:1 and that for each additional Deutschmark that the East Germans were given as a political sop would cost a year or two's economic growth...

Oh, and where is the Spiegel article on how suspicious the French were? The French's price for reunification was EMU - to make sure that the Unified Germans didn't get too independently powerful.

What's the wee purple spot towards the SW of your map?

BE - 1:1 was a classic instance of how extremely fixated the Wessis were on making it happen, and what an emotional matter it was for them

I think the froggies were being clever: they saw reunification was inevitable; they also saw the Germans were sensitive to there being fears over the might of the reunified country; so they used it as an opening to get something they wanted - we'll be so scared of you that we'll oppose all the political things you need our agreement on for things to go smoothly - unless you bind your strong currency and economy into the rest of Europe

dearieme - it's the Saarland, which was a sort of French protectorate after WW2, and only rejoined West Germany in 1957

Perhaps the Foreign Office spent too much time listening to Radio Gleiwitz?

Thanks. When my wife attended a German secondary school in 1960, the classrooms had a huge map on the wall showing pre-1914 Germany, with the modern West Germany superimposed on it, and adorned with the question "Must it always be thus?".

There was a lot of fear of the upsurge in German power vis a vis the balance of power in Europe which was still and issue in Thatcher's day. It might not have been bad advice but simple fear.

Strangely enough I first went to West Germany in the late 70s and althoughmy German friends were mostly to the left of your own - it was pretty obvious to me from the moment that the Wall came down that German reunification would be inevitable. You could see it in the way that most German's talked about West Berlin and how they considered the then state of affairs to be totally unnatural.


What is slightly amazing that Thatcher, who whatever her faults was usually fairly in touch, didn't realise this as well. Who was briefing her?

might not have been bad advice but simple fear

it's certainly a factor, James - the Danes (who along with the Dutch had been the laughing-stock of NATO for their limp approach to things military) suddenly started to puff out their chests, and committed actual tanks to the conflicts in former Yugoslavia - indeed, one of them actually opened fire !

whatever her faults ... who was briefing her? - we find ourselves in agreement again, TB - it's got to stop

Why we still have a military presence in Germany is beyond me.

"we find ourselves in agreement again, TB - it's got to stop"

Don't worry it will sooner or later.

Isn't the 80:20 principle that 80% of the time sensible people who are aware of the facts will agree - the other 20% is politics however!