The Utter Uselessness of Wind Power 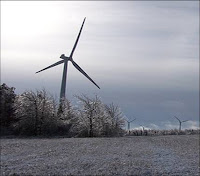 The principles have never been in doubt. Now, the cold weather of recent days has afforded a set-piece demonstration of the uselessness of wind turbines in the UK: data from this handy source.

The contribution made by the current fleet of wind turbines has ranged from a little over 2% of total national requirements, to as low as 0.2% (low winds are often associated with sustained cold weather). This extreme swing is not predictable very far in advance, and forward planning must cater for the worst. When the degree of swing equates ‘only’ to around 2% of total requirements, the planning system can cope fairly easily.

This current wind fleet has a nominal capacity of 1.6 GW. The government aspires to see this grow to around 30 GW – almost 20 times greater. Let’s immediately acknowledge this isn’t feasible, in construction terms alone; but consider what a 10-times increase would mean. There isn’t consensus on whether UK power demand is going to rise or fall in the coming years, so let’s assume it stays roughly the same. With no reason to imagine that wind predictability will change fundamentally, at 16 MW we’d be confronting hard-to-predict swings of around 20% of total national requirements.

Now engineers are clever fellows and there would be solutions to this problem. The two candidates currently available are (a) keeping 20% in reserve, in the form of coal and/or gas plants on permanent standby (this means actually running them at low levels of output, since plants can’t quickly start up from zero); and (b) access to large-scale hydro-power with plenty of spare capacity – since this can come online in seconds. This, in combination, is exactly how they cope in the big wind-power zones of Denmark and N.Germany – tapping into Norwegian hydro, and fleets of coal-fired stations.

There are plans afoot to bring a connection across from Norway to the UK. Well and good. But this will cost £££, as does running a coal plant in low-output mode. (Incidentally, National Grid love this, because they will be forced to invest hugely - at guaranteed rates of return !) So – will wind plants be charged these costs; or the costs of developing a proper long-term solution (= efficient means of storing electricity) ? Nope, these will be borne by ‘the system as a whole’, i.e. you and me. Wind generators will continue to receive their current subsidies, and get a more-or-less free ride on the costs of balancing the system.

And can Norway back up the whole of Northern Europe ? Nope. So, that’ll be coal and gas for the remainder, pending some technical break-through on the storage front.

No not really. ALl the parties are committed to this green0eyed-tin-hatted-lunacy.

Bad enough that they sign up to unachievable emmissions targets, then to try and push ahead with a system that will wreck the beauty of much of our countryside and not deliver any results.

All at huge costs to our wallets as well.

It is pure essence of socialism

The windmill projects have only seen the light of day because they are the AGW priests' get out of jail card. Fortunately AGW is being killed off by evidence of natural warming and cooling cycles as well as the CRU emails. So I very much doubt that all these windmills will ever get built.

Not to mention that the grid is not designed to handle constantly varying electrical input (aka wind farms).

Thanks, anon ! correction made

What I have long wondered is has anyone calculated the "Carbon cost" (though this is obviously a load of old shit anyway) of building these things?

I mean, they don't spring up out of well fertilised soil using the energy of the sun. They need to be engineered, transport and built. People need to get ther to build them, all of which releases a load of CO2. So, do they "save" more CO2 than they "cost" to build?

Likewise I have wondered the same about the wave power machine they are building in Newquay. There are no organic forms of the infrastructure needed for this thing to work.

This whole climate change thing really pisses me of.....

I agree with the major issue of wind power being its unpredictability - IMO, if we must go down the route of "green" power generation, then tidal power makes far more sense. After all, the wind might blow, or it might not, but the tide goes in & out all the time...

agree, solar too; the sun is always out in some form and that is good enough for plants.

Sadly there has been a lack of invetment in solar energy in the UK and Europe and now China has the lead.

Our guys are obsessed with this dead end of wind power

CO2 emissions from wind? Yes, calculated and known. Over the life cycle a little more than nuclear and about the same as hydro.

Solar is around three times this level.

The really annoying thing is to push this retarded technology when it is not even ready yet. So that when it proves to be useless in scale which will make people notice (as in power cuts), it will be rejected.

Whereas I think that technology given time could find a solution to this variability, by developping buffers such as storage or hydrogen production.

Sadly, as clearly stated. Every single watt of Wind power must be backed up by a traditional power plant.... Unless you only want power when the wind is blowing. Under rare circumstances these turbines can help offset powerloads, but the cost per megawatt hour is enough to scare the richest of silly anti-mechanical nutbags

Ergo the greenies should be pushing nuclear as it doesn't require back up from carbon producing systems????

Tidal power looks good until you ask about the cost - it is about three times as expensive as nuclear!

Has anyone considered utilising the methane output of politicians?

The answer has at last occurred to me. For more hydroelectric pumped storage we need more large lakes on conveniently located high ground. There is no need to dig out such lakes - a few well-designed nuclear blasts should do the trick. Since redundant nuclear bombs already exist, the out-of-pocket costs would be negligible. The externalities wil just have to take care of themselves.

dearime - if Ed Miliband reads this you will have given him heartfailure - I commend your post!

Have a look at the accounts of Ecotricity Group (3521776). Wind turbines seem to be profitable. It would be interesting to know how much of the income is provided by ROCs & etc.

So, the plan is to construct an unattainable number of windmills at an unaffordable cost in order to provide an unreliable supply, whilst maintaining conventional generating capacity but not using it efficiently and making it less fuel-efficient when it is used.

a) that the total energy cost of manufacturing, installing, maintaining and ultimately decommissioning these windmills is more than they will produce during their operating lifetime?

b) - as I read somewhere v. recently but can't remember where -that they are even more expensive to repair than to replace and so in Spain you can see a field of these things where new ones have been installed next to the rusting hulks of those they have replaced?

anon @ 4:24 - they (and their peers) are subsidy-wallahs: no-one said that couldn't be a profitable line of business !

Sackers
(a) - don't know, and let's see how high power prices go before answering !
(b) they are indeed buggers to maintain - and offshore, very very difficult & expensive indeed: it is almost inevitable that an offshore turbine that fails in winter will be abandoned until a summer maintenance season (maintenance on North Sea oil & gas platforms is always done in summer)

Hello, I now became a member of this forum here and I would love to be a member of it. Just enjoy the environment here. Good work by the admin and every member here. I appreciate the quality of posts provided by everyone and hope I can do that for you all too. Just to start off, I discovered a cool website named [url=http://www.home-businessreviews.com]home based business opportunity[/url] that reviews several great home business ideas. Anyway website owner earn's more than 500$+/day. He found some very cool home business reviews. Because I found that these home business ideas worked for me I decided to post it here so you also can earn some extra cash in your free time. Owner of this website also found very simple way get some extra money just taking [url=http://www.home-businessreviews.com/Surveys-For-Money.html]surveys for money[/url]. Anyway if you need to make some extra cash feel free to check out this site. Hope you guys like it. OK, look forward to great conversation and hanging out here often. www.home-businessreviews.com