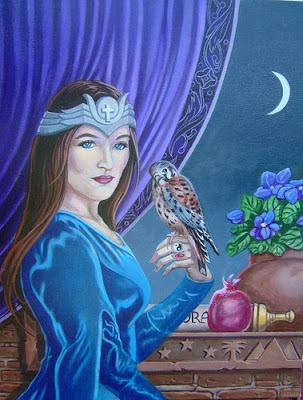 I couldn't be less impressed with this ill thought, half baked, tokenist edition.

The panel is not yet decided as I guess the producers rush to try and arrange an all women panel. Something that should have done at conception.

1} Should the school secretary be available on twitter.
2} Which is the best bingo site ?
3} Terry nappies will they save the planet?
4} Why do magazines have a full page advert for a Victoria sponge next to an article about dieting?
5} What will the panel do during the World cup?

....Have been severely and rightly condemned by my secretary and assistant Miss CD as both sexist and stupid and that when Mrs Q sees it I shall regret it. I reminded her that Mrs Quango has no interest in QT, and that tonight she will be talking to her sister, then Facebook, then talking her to sister while they are both on Facebook, then internet window shopping...

Next week's Question Time is from The Judy Garland conference centre in Brighton and features Iain Dale, Stephen Fry,Lord Mandeslson, Alan Duncan and Weylan Smithers.
The audience will be made up exclusively of people in white t/shirts.
Posted by Bill Quango MP

It is a silly idea, but at least we know the nature of the first question (I am going for something unsubtle).
A difficult week because some of the stories - Venables, Ashcroft -haven't moved on at all since they were covered last week... but on the other hand the BBC will want to get Mackenzie going on Venables.

However, I am going for

- Does the panel think that women have now achieved equality in the UK?

- Should the wives of party leaders be seen and not heard

- Is it right that MPs can use parliamentary privilege to escape prosection for expenses fraud?

- Is high-speed broadband for everyone a waste of money

Is Harman on it? I have had a long day, I don't think I can cope with having it on if that is the case....

If she is, Pay Gap will be one of the questions...and rape conviction rates.

- Man Utd or Arsenal for the Champions league title?
- The merits of 5.56mm over 9mm
- Foxiest newsreaders are at BBC, Sky, or C5?
- Best way to disable a Terminator
- If someone invented a vending machines that took foreign coins they'd make a fortune

Does being a PR professional help with being wife to Gordon?

Should the NHS provide obesity surgical intervention for all 'fair, fat and forty's?'

Why are so few children being refused admittance to the schools they have applied to? Would the Swedish model of parental choice schooling be better?

Why should families pay to look after someone else's Granny?

Removing the allowance for feeding pets from social welfare payments for anyone under pensionable age.

Mr Q you are a very bad man - could it be you are intending to stand down at the election ?

anyhow having scored ever higher with each passing week I am brimming with confidence (and steam is coming out of my ears) as I offer:

Miss CD was supposed to be doing this tonight, but she texted that she can't. Probably off speed dating.

1* John Venebles issues. Is Kelvin on the panel just to wind up the audience. Its like having the pub landlord on..

3* Afghanistan opportunism Q and a Chilcot rider. Jo tries to defend and attack Gordon at the same time. Justine bashes Gordon.
Flint put on spot over equipment issues. Not very convincing.
Monty puts the ball in the net again1 Heard him on R4. Kept reaching for the off button as I can't stand gardening. Yet he was very good, so he stayed on.

4* Man killed by yobs. 10 years! How can something like this go on for 10 years? Kelvin gets his first claps.

5* All female shortlists..should have guessed that one.

6* has QT bowed to PC pressure..
YES. It worked fine. But what was the point of it? Why not an all women panel with an all women production crew as well. Celebrating women's week is not a reason. Will we have an all former athletes audience during the Olympics? I should leave it alone I know. Its symbolic. But that's exactly why its so wrong.

SO.. to the winners
BQ: Zero. Odd that
Miss CD: 2 + 1/2 for social services
Botogol: 1 for equality which came up in a roundabout way. Good attempt
Miss S-J : 1 for social care.
CU: You need to fire a wider burst. Zero
Malcolm tucker - 1 for venebles.
Anon: Very interesting questions that just didn't come up -zip
HG: Also some good q's that should have come up but didn't - nil
ND: 1 for the Landrovers .

This week Miss CD wins a basket of facial scrubs and bubble baths.

"Next week's Question Time is from The Judy Garland conference centre in Brighton and features Iain Dale, Stephen Fry,Lord Mandeslson, Alan Duncan and Weylan Smithers.
The audience will be made up exclusively of people in white t/shirts."

When is someone going to try and court my "demographic"? Or even just my vote?

However silly the idea the women in the audience proved you wrong - the wet liberal was one of the men on the panel! I think Toby Young would have been better than Monty Don.

BE - young white single hetro male? No one cares about you. You're already considered to have it all..

Philipa.
The women on the panel were all good. Even my personal figure of loathing, Flint. Except when told about poor webbing by the mum and she said to write to her MP!

Far better than JSP or Hattie banging on about testosterone caused the credit crunch and how calm and relaxed women are at work.

Can't say I've ever noticed that.