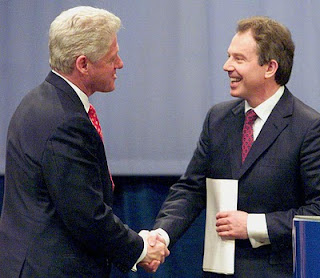 Popular reporting has it at

Clegg - 10
Cameron - 7
Brown -4
As Jerry Springer would say..
"What have we learned?"
And Jerry Springer may have been a better format.
Bring out the protagonists, Brown and Cameron.. and set up the scene. One has been stealing the others money, getting into fights with other countries and breaking things, like the country.
They argue and swear at each other.

Then Springer brings out the Third Party. In his softly softly style he says "Dave..are you aware that Gordon wants to have a secret parliament liason with Nick?" Nick walks on in a mini skirt no wider than a cable tie and suddenly the chairs fly. All the time the bouncers are restraining them Jerry keeps his fixed secret smile on his face. He's still got Alex Salmond and Herman Van Rompuy to bring on yet.

What the debate has done is something that the parties already knew. It has killed off the idea that a politician's politician could be leader of a political party. A sour old Michael Foot or an uncharismatic Michael Howard or an ageing Ming. These figures are consigned to the soap box of history.

Labour were the first to try out just having a front man who looked good, spoke well, appeared sincere, had a sense of humour, charmed the media and radiated confidence. Tony Blair took the Clinton success to Britain and made it work. The Tories very belatedly, and after many false attempts, took notice of the idea.

The choice of leaders of David Davis or David Cameron would give much the same result.
The Lib dems, even sooner than the tories realised that an old school politico, however venerable, was never going to charm anyone except those watching from a Care Home.
Huhne or Clegg. Equally adept at New media.
"Its the personality, stupid!"

Only Labour, who had discovered the formula in the first place, seemed not to want it anymore. In the early Brown days they even tried to make a virtue of 'no more soundbites, no more smiling - Not flash, just Gordon."

It didn't work. In a 24 hour news cycle the leader IS the party. He has to be on form, on message, on fire. Every day. One of the posters on Guido said
'people who aren't even interested and cannot know anything about politics still vote. They vote for something, even if its only the choice of shoes the leader's wives will wear to the polling booth." Probably true.

It was very apparent that even allowing for Brown's disabilities in his sight he wasn't going to do well last night. He doesn't have IT. He just doesn't and its no surprise to find that out.
What is a surprise is that Labour are still trying to position Harman and Balls as successors. They don't have IT either. Alan Johnson has affability and humour, but not competence or charisma. Maybe one of the Milibands when they get the chance? But certainly a Miliband over a Darling any day of the week.

If you want to know the secret to this new turn up in UK politics look only to Obama. He has IT. He always did. That's why they all want to touch his magic. But so does Sarah Palin. It isn't a manifesto. Its..well, whatever it is..the lesson from the Presidential debates is clear.

"We are all Americans now"
Posted by Bill Quango MP

You can lose the argument and still win the public.

That's how silly it all is.

This doesn't seem right. George Bush was useless on TV and served two terms. And Ron Paul is almost level with Obama in a recent opinion poll http://www.rasmussenreports.com/public_content/politics/elections2/election_2012/election_2012_barack_obama_42_ron_paul_41 .

It wasn't Bush vs Obama.
Bush vs Kerry and Bush vs Gore.
Bush has plenty of Charisma for Americans. To Europeans he looked like a child, but so did Regan, yet they both had major screen presence.

And Ron Paul..he doesn't have IT. Sorry. he won't be coming anywhere.

Also, in the UK, where the parties are all centre ground, what other factor could a party deploy.

Alan Johnson has affability and humour, but not competence or charisma.

Not insignificant handicaps in a normal human but probably not insurmountable for a PPM.

Anon at 4:50 said: "George Bush was useless on TV and served two terms."

When I saw George Bush on tv he was urbane, funny, self-deprecating, calm and in control. I, too, had listened to the British media who had him down as a thick, near redneck. He wasn't. That did not make me agree with all of his policies though.

Milliband is regarded as, at best, lightweight by the FCO mandarins. He does not read his briefs and pops up with silly ideas.