Lunch is for wimps 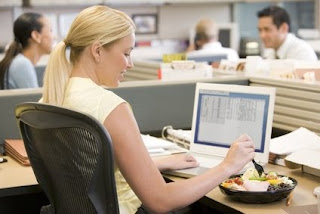 A survey from Monster, the recruitment website, says a quarter of workers don’t take full lunch hour.
19% of employees take under 15 minutes for lunch and over 10% admit they never take a break at all, according to a new survey.
The study, conducted on behalf of employment website Monster, also showed that, even when we do take a break, the most popular activity is catching up on e-mails and phone-calls which means never leaving our desks.

Monster said that the survey highlights a “growing trend in a climate of job insecurity to be present at our desks at all times”.

I wonder if this trend is repeated at all levels and all sectors. I doubt it. When I was a cashier I got an hours break, which was an entitlement that was always given and always taken to the minute. As a courier, ate in the van, while driving, but that was to finish up earlier.. As a manager I had lunch around 4pm' and very often only 15 mins and NEVER hot food as the interruptions would mean it would just end up cold food. As a regional manager I had lunch maybe twice a week. Other days not even eat at all. Always had lunch when working at Head Office, but 99% at the desk while working. Everyone else there had lunch out. I never once saw personnel or accounts go without lunch, or eat at desks, whatever the deadline. The directors and department heads too never missed a lunch.
As the boss today I have lunch for an hour , maybe 90 minutes almost every day, and hate it when I have to miss it.

Is there a difference in public and private sectors? Can a nurse get a decent lunch hour without interruption? Can a policeman go to a pub for a break?

Email ThisBlogThis!Share to TwitterShare to FacebookShare to Pinterest
Labels: ecomomics

As a former denizen of what is known as the public sector, in the bit I was in, when "flexi-time" became available the incidence of people lunching at the desk increased significantly, as did the number of exhortations from the "Health and Safety" Officer to "not do this" because it was detrimental to well-being and performance; however, because "core hours" - the ones where one was expected to be "logged in" except when at lunch, were 10 til 4, unsurprisingly quite a lot of people opted to maximise the time spent "at the desk" during core hours, even if what they were doing at the desk was eating lunch whilst hoping the 'phone wouldn't ring, or an urgent e-mail pop up in the in-box. To make it even more of a temptation to take a "working lunch" one was working to a set number of hours at the desk "per month", not per week, so, without undue inconvenience to oneself, by "working" through 14 "30" minute lunches, you could acquire a "7 hour credit" each fortnight, and have 2 long weekends a month without having to touch your annual leave. Simples...

If I had to guess, I would say that there are approximately 60,000,000 estimate of what the "lunch hour" was all about.

Richard Elliot said...
This comment has been removed by the author.
12:54 am

My expriences from the 5/6 companies that I have worked in:
- When I'v been in lower paid factory type jobs you clock watch, and the production line is turned off and on during breaks. You are only paid for the hours you actually work (not the time you are on breaks) and therefore you definitely don't work through lunch!

- In lower skilled office jobs, I and most others, still took a decent amount of time for lunch. I never used to take the full hour, but that's because I'm not one for shopping(and spending my wages!). I think there is a general theme with this grade of job that when the potential for promotions and pay rises aren't there you take your 'entitlement'.

- Since getting on the career ladder more seriously I've never taken a lunch hour. My personal view of the wage bargain is that I want to show commitment and get ahead. In return I expect decent pay rises and bonuses and have largely got this. Is this the same for most people on a challenging career path?

- I'd say my luch breaks have got shorter, not longer as I get more senior.

I had an interesting discussion on this subject with a few people in Australia recently. People over here seem to see the lunch hour as much more of a right. My eperience so far is that the average break is longer than in the UK.

Can take up to 2 hours at the council, but since I'm trying to save cash usually just eat something simple at my desk and read your blog :)

Old Holborn thinks that this may help (allegedly).

30% of the staff in my bank eat in the canteen, apparently. Most of the rest eat at their desks, surfing web and emails.
In the summer a sandwich outside is popular.
I would estimate 25 mins as the average ' break'

I do quite a lot of work with public sector organisations and I have just stopped trying to contact people at all between 12 and 2 or after 4. From my experiences, Norfolk based council workers are the most liberal with the definition of an hour.

I have to have lunch - at work to early for breakfast and often too late for dinner. I must eat something so grab lunch whenever I can - albeit not every day.

Then again, the concept of working hours and non-working ours has enitely broken down for me in the age of the blackberry.

Got into the software business in the early 80s; small office, an offshoot of a Canadian firm just setting up in the UK. 7 of us doing everything, design, software, installation, support. No-one took a lunch break, indeed, I was with the firm for over 20 years, and it was always lunch in front of your screen.

My ex worked in the DWP for years; one of her colleagues spent every lunch break in the pub, and was pretty much useless for the afternoon (snoozy). No-one raised an eyebrow.

One of our favourite customers was BLDSC - the British Library Document Supply Centre, in Boston Spa, who serviced requests for academic papers and journals held by the BL.

Every now and again, you would get a panic call. Say, 10:20am - system down, we HAVE TO HAVE IT BACK UP. Get someone on the case by 10.30. Ring them up. "Oh, he's taking his tea break. I'll tell him to call you when he gets back". Union would be on their backs IF they didn't take their breaks...

When I was thin I couldn't miss lunch without feeling like shit so always took it. Now I am fat I will work through lunchtime for a client I like. Hell, I will even work weekends/evenings.

Pub lunches. Banned everywhere I have worked. Used to look out the window and see the architects staggering back from the pub at 2pm.

In many workplaces if you are the boss you are expected to not leave the building. When 'no smoking' came in it actually required another junior level of management just so the managers could have a puff.

Seems its much as we thought Lunch is for the highest or lowest.

Driving a Eurostar from Paris we (the driver/instructor and three trainees) had lunch at the controls whilst pelting along at 186mph.

A bag of crisps by the PBL (brake handle) - bottles of pop by the pressure guages, a cake by the SIAC (computer monitor.) The driver was unwrapping and passing out the baguettes from the flat document desk in front of him ...

It was even better for our French counterparts on SNCF. The train managers would fetch a bottle of wine or Stella for the driver's refreshment.

Now that's what I call a working lunch.

Anonymous said...
This comment has been removed by a blog administrator.
12:37 pm

I worked at a video games company for 7 years, until recently. I joined about 3 months after it started, but even then working at lunch was optional. Even when it was ferociously busy, with working late nights and weekends being the norm, the lunch hour was still a break. At 12:59pm, a hive of activity; at 1:05pm, office half empty, people playing games on the Xbox in the meeting room. For a long time this lunch taking was pretty much universal, from directors downwards.

(It was odd that lunch was treated this way, by pretty much everybody, considering how freely people were expected to give their time when it came to evenings and weekends. But I liked it anyway and will no doubt come to look back on this time quite wistfully...)

I suppose those most likely to work through lunch were the producers and project managers, which seems to be in keeping with the pattern implied by the original post.

Unfortunately having accumulated far fewer jobs than I was expecting to have done by now, I don't have any tips for seekers of a decently-sized lunch break.

Monster? I knew someone who worked for that lot. Apparently their willingness to sack people was such they they were all terrified of taking lunch.

EK. I believe it. How do you get lunch now?

Tom. Seems the only decent sized lunch comes with being the doorman or the MD.

Demetrius. Haven't had much dealings with Monster but there are a lot of really tough employers. Post for another day..

The Daily Mash is on it