Obama's Treatment of BP: Where's The Rule of Law? 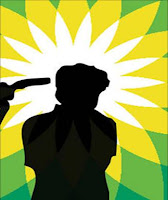 As BP's sun sinks slowly in the West, arch conspiracy-merchant Karl Denninger reckons that the $20 bn bought some kind of limitation on its liabilities. But unless that is true in a very strong legal sense, it looks a lot more like Obama is just making it up as he goes along: a new doctrine of liability for consequential losses.

Now this we expect in Russia and third-world countries. Even the big boys - Shell and, yes, the mighty Exxon that considers itself above the fray - have found themselves whacked with retrospective ‘environmental regulations’ in Russia after they’ve made the upfront investment. (Curiously, the remedy turns out to be that Gazprom relieves them of a controlling stake in the venture.)

Then again, most investors never really expect to rely on the rule of law in such places. But for a capitalist, rule of law is even more important than universal suffrage. And where, if not in the Anglo-Saxon jurisdictions, can we expect to find due process ?

No-one should argue we’d do just the same in the UK. As has rightly been pointed out, not least by the IEA, the Piper-Alpha disaster in the North Sea (prop. Occidental of the USA) resulted, not in an anti-US outcry but in a very mature response: prompt government adoption of the recommendations of the Cullen Enquiry, which elevated offshore safety onto a new plane, in the UK and worldwide.

Mr Obama – stuff happens ! It is as incongruous for a democratically-elected leader in a law-governed country to react as he did, as it would be for a priest to renounce his faith because something bad happens in the world.

Stuff happens and – guess what ? - it will happen again.

Indeed, US Russian relations are at an all time high.

No doubt they are trying to engineer an American take-over of the company.

Obama is just a tool though, he does what he is told.

If I understand President Ogabe's position correctly, it's that when a guy stands on a table screaming 'Allah Ackbar!' while hosing down his fellow troops, only a bigot could possibly read some kind of religious angle into all that. On the other hand, when a oil rig explodes the key factor is that the company concerned used to be called 'British Petroleum'.

I am sorry to say that Obama IS culturally (and apparently, proud of it) third world. He has little background in the peculiar Anglo-Saxon tribal concept of the 'rule of law' (especially as developed to ameliorate the yoke of the Norman conquerors). Quite how the common law based Americans can come to terms with Obama's third world outlook remains to be seen.

not clear to me what alternative ethical / political doctrine China espouses any more, even for public consumption

just amoral self-interest of the Party

ND: "post-imperial lack of confidence?" - possibly, though the American's world view has them as the plucky colonial anti-imperialists still. They simply don't see themselves as imperialists.

In contrast I think the Chinese have knowingly returned to their imperial past - if they ever left it.