Don't amount to a hill of beans 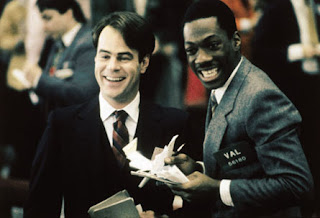 The purchase was enough to move the entire global cocoa market, sending the price to the highest level since 1977, and triggering rumours and intrigue in the City.

Cocoa prices have been rising and rising. Poor harvests in Ivory coast and Ghana have led to a supply shortage and rising prices for the bean. The BBC had the business news in 2008 that London cocoa futures have hit a 23-year-high as cocoa turned out to be the most lucrative commodity that year. It was trading at £1,820 per tonne. Yesterday it was down from 16 July {£2,317} on a falling market to £2,227.

Chocolate bars have been getting smaller . Mars and Snickers were 62.5g in 2008 : 58g in 2009. Helping to tackle obesity said the PR people. Rising costs said everyone else...Added to the general food inflation was the poor harvests and civil war in Ivory Coast

So is this a smart move? A Trading Places Pork Bellies opportunity to corner the market?

1} Confectioners are used to the rising price over the last few years. They may cut the size or reduce cocoa content reducing demand.

2} The beans are actually being taken delivery off. Unusual behaviour for a hedge fund that now needs to pay to store them in European warehouses.

3} The market price is now falling so there will have to be a call whether to purchase further stocks to further limit supply or unwind the position. As he says 240,000 tonnes is an awful lot of beans to dump onto the market.

Just a few other points. The situation in Africa isn't improving much. only a modest yield increase coming up.

The EU insists on chocolate containing 25% {35% dark choc} cocoa solids so there is only so much bar to cut.

Anthony Ward was a Director and head trader for cocoa and coffee at Phibro and is the ex-Chairman of European Cocoa Association. So I guess he knows his onions too.

He's done it before.

In 2002, Mr Ward made millions when he pulled off a deal similar to his current gamble.City traders first dubbed him "Chocolate Finger" in August 2002 after he acquired 204,380 tonnes of cocoa beans. Mr Ward made £40m in two months after he watched the price of cocoa increase from £1,400 a tonne to £1,600 a tonne.

I'm going with the Socialist Workers latest target for contempt to pull it off.

The EU insists on chocolate containing 25% {35% dark choc} cocoa solids so there is only so much bar to cut.

I can't believe you didn't know that!

Stocked up on the wrong kind of beans, didn't I !

could you stand somewhere else then, please ?

BQ...seriously...this is getting daft. The world is turning into Bob Newhart sketches; this time it's Sir Walter Raleigh in the colonies.

Steven L : Another nail in my quest to become an MEP..

Scan: CU mailed me on that Airline Newhart that you sent.. Thanks! Much appreciated. I shall listen to it soon...

I derailed in the heat the other day ... wrong type of Wagon Wheels too !