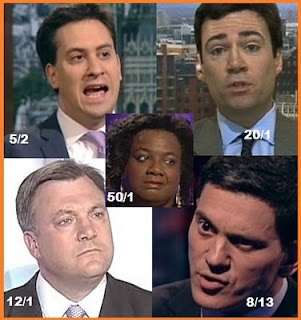 Just listening to the Labour's leadership debate on five live.
Every time I reached for the off button, which was frequently, some gaffe appeared. Turned out to be quite compelling really..


Ed Balls - "I despise people who give anonymous off the record briefings against other people. They are Cowards..People who accuse me are always off the record.."
Victoria Derbyshire - "Well I have a list of ON the record quotes here.."

Diane Abbot - "I think we should come out of Afghanistan and hand it all over to the UN."
Ed Miliband - "It is run by the UN Diane. Its a UN mission."

Andy Burnham "I am endorsed by Jamie Carragher..my hero is David Moyes.I like football...BTW..did I mention I'm a scouser.." And then a long,long prepared rant about GP funding that ended with an almost hysterical shriek of Death tax! Death Tax! DEATH TAX!
Bit to confrencey for radio Andy. you sounded like Goebbels.

Ed Balls {how would you cut the deficit?} I wouldn't.. {Not at all?} No! I would grow the economy to reduce the debt..{laughter all round}

Ed Balls again { an audience member went into great detail about waste in the public sector}
"Well if you go to Lords you will see people drinking champagne and sitting in luxury"
Victoria - "What's that got to do with anything? "
Ed - "Its all waste. Everyone wastes money.." his point was lost on everyone.

Ed Miliband. "I think we need to look forward not backwards. That's why i would apologise for the Iraq war."

David Miliband "The idea that New Labour ran up huge debt is just a Tory/liberal spin. We paid down debt..
John Pienaar - Erm, well that's not quite true. In the early years labour kept a tight rein on finances, but in the second term huge amounts were spent on public services, as demanded by the public. but this spending only increased, it never reduced."

And my favourite..
Audience man. "I believe these candidates are just telling us what they think labour supporters want to hear. They aren't being realistic with us, just pandering to our natural instincts."
Victoria - " So who would you vote for?"
Man - "Ed Balls. He's absolubtely right on the debt. We don't need to pay it down,its fine."

{some errors, but it was from memory. You get the gist.}

Overall.
Milibands were most convincing. About even. Balls ..well, was just Balls, but has appeal for some.
Burnham. Not as good as he can be. Abbott. I'm a mum..I'm a mum.. adds nothing, but adds it in a pleasant way.}
Posted by Bill Quango MP

Email ThisBlogThis!Share to TwitterShare to FacebookShare to Pinterest
Labels: Labour Opposition to Government

Very good comments. I thought it was a shambles that came across as just a noisy babble. Ms Derbyshire came across as particularly high-pitched and hysterical with her list of dumbed-down questions:

"When did you last cry, Ed Balls."

his reply was that he had just been to see "Wicked" which sounded more like "wicket" which sounded rather curious in view of his later cricket comments which were about the lavish hospitality on offer at the current Test at Trent Bridge, not Lord's, btw and her plaintive appeal to the audience:

"Did they pass the human being test?"

In the words of Francis Urquhart, I couldn't possibly comment but the biggest irony came in Ms Derbyshire's reaction to Balls' Test atch comments when she said:

"But that's the private sector. We don't have to pay for that. How can you justify waste in the public sector?"

Precisely, Victoria. How much did it cost the BBC licence-payer to put on this outside broadcast Labour Party event. I think we should be told.

Yes, it was a bit odd.
The 'Smash Hits' questions, what's your favourite band? Who's your best friend? were just weird.

Ladbrokes have cut the odds on Dave Miliband being leader after that debate.

Not sure why really. The Milis were about even I thought.

I caught this too, just as the probation worker was saying her bit...and Balls tried to say that waste in the private sector was equally bad. Bonkers.

How many times did the candidates say "That's just not true"? (When confronted with the truth, of course)

You have to wonder why we are even discussing these stupid cunts.

Am I visiting C@W or somewhere else?

Lilith: They did say that a lot. Milibands + Balls all used the standard NuLabour defence of "I don't accept that" during the election.
They seem to feel that just changing a little bit, admitting a few mistakes and promising to do better, will be enough to secure an election victory. They may well be right. Tories were massacred in 1997. They left a growing economy to their opponents and they had been a sleazy, lazy, tired, shaggy, barren, corrupt government. Tories still believed they would be back in after 1 term.
Things are much, much rosier for Labour.

Anon: Its Business AND Politics here anon. Thursday is the traditional look at politics day for C@W.
Its the silly season after all, so this debate seemed apt....

You're not going to like the Dr Kelly piece at the weekend I can tell.

Have you noticed Li Ka Shing and EDF lately?

@Anon @ 6:42 pm - EXACTLY! Who cares what interim leader Labour are electing? They are out of office and will be out of power for many years. Anyone thinking expecting the coalition will self-destruct and voluntarily give up their power is delusional. There won't be another General Election for 5 years.

Τhere is definately a great deal to learn ɑbout this issue. Ι love all of the points you've madе.
www.travelodgeauburn.com |

This is cool post and i enjoy to read this post. your blog is fantastic and you have good staff in your blog. nice sharing keep it up.
http://www.fashionjapan.net |

You actually make it seem so easy with your presentation but I find this topic to be really something which I think I would never understand. It seems too complicated and very broad for me. I am looking forward for your next post, I will try to get the hang of it!
http://www.newbusinessmodels.org |