Would you like carrier bag. Cashback ? How about a mortgage? 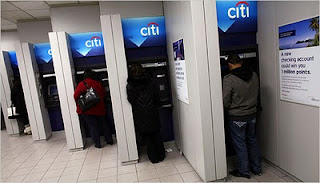 Tesco announced more profits, maintaining their £1 in £3 spent in supermarkets grip on the UK.
But a lot of this years profits came from overseas, with UK a little underwhelming. With fuel sales removed its actually quite stagnant. The big growth area for Tesco was Asia. The USA market doesn't look so hot, stuck in the same recession as we are. They also seem to be doing the sales and leaseback of stores, which is a short term gain.

{BQ opposes that strategy whenever it is mooted, but the beancounters nearly always manage to sell the benefits vs the downsides. In much smaller companies it means they actually suffer in a boom, with higher rents, and just look at Alliance-Boots recently, but anyway..}

So in order to boost future profits Tesco are increasing their financial offerings looking to add mortgages and current accounts to their insurances, loans and credit cards.

Government has yet to make a twenty year old decision on the PostBank so still no new banking facilities there. There is a big difference between the two models. Tesco primarily intends to be an internet bank. I'm sure they will have facilities at the checkouts, but really they aren't about to embark on a branch based model. They currently have only around 1,000 stores, but with phenomenal footfall. They also have plenty of cash and aren't encumbered by the banks' historic bad debts.

PostBank would use the existing post office network, some 12,000 outlets, more than all the banks combined, and covering the most rural of areas, highly unprofitable for a network. It would be a branch based model. They would be better for the local community, saving long journeys, helping the elderly who are "digitally excluded". However the government would have to stump up the cash for the bank.

I'm not sure which is the better model for the country if a genuine 'alternative' to the current banking system was to be tried. retail, not casino, safety first.. an' all that.
Tesco would be the cheaper. They are self funded, would only need a few financial advisers in each branch, and handle the rest through their stores. They generate cash on site too and are experts at automation.. But they will be restricted to the online and those who can best travel in, which must be said is already about 15% of the entire population.

I rarely go into my own local bank branch. If it wasn't for the business transactions I wouldn't use it at all, banking online, getting cashback and so on. But that local bank is always packed. Takes a good 10 minutes to be seen whatever time of day. And if you go into any bank branch its busy. So many,many people do still use a branch based model. Post office currently get their main income from their branches {after postage} from cash withdrawals/deposits.

Tesco are going to become a bank regardless of what the government does, but if PO is split from Royal Mail it would be most beneficial to its business model to be able to be a bank. In other countries where Post Office was split from government control PostBank was automatically introduced..
Putting the Post office into supermarkets has already been trialed, with very disappointing results for the supermarkets who can make a lot more money a lot more quickly by filling the space with tins.
Posted by Bill Quango MP

Dear Bill, non bankers going into banking is not very new, I am told years ago, you can probably advise me if I have been mis informed, Henry Ford had problems when trying to gain finance from established banks when the model T production started to take off, like a lot things he did he decided to form his own bank (he was told the model T would never take off - the usual banker's excuse for not lending)

"the existing post office network..covering the most rural of areas,"

Well, not quite the most rural - remember how they recently closed a whole lot?

Anon: Not sure i know that Ford story. originally Ford motor company was started on the usual capitalists-dragon's den model.
Ford's ideas and own money and some willing investors who contributed cash or premises or supplies.

Weekend Yachtsman: Well quite. there were about 17,000 offices before New Labour's cull. The most amazing thing about post offices is the large state run ones, of which there are only about 250 in number. These offer all the services of a bank, except current accounts - mortgages, health insurance, holidays, savings etc.. Plus they have the largest mail volumes and the most pension users, have all the latest technology that you will never see in your local office - yet they make a loss and have done for years and years.
In other businesses the Flagship branches carry another 5 - 10 outlets with the profits they generate.

Why does it have to be either/or?

HMG can stop getting in the way of the Post Office providing new services AND give Tesco a banking licence.

Post Office has some way to go on the trustworthiness and efficiency front before I would switch my banking to it. Tesco less so, as long as they give me plenty of Clubcard points.

That said, my current banks (First Direct for current account, ING for savings) haven't irked me enough to switch.

Be said: "That said, my current banks (First Direct for current account, ING for savings) haven't irked me enough to switch."

There's an awful lot of people out there itching to switch away from the likes of RBS, HBoS. Including me. We know the banks are over charging us to make up for the money they have lost due their own hubris and incompetence.

Be It doesn't need to be either/or, but the existing banks don't like competition and can be very obstructive unless instructed by HMG. For instance RBS, owned by HMG,still refuses to allow its customers to use the Post office, despite promising every year to do so, and assuring the regulator it will. This has gone on for the last 7 years.
I would think Tesco would be the bank for a metropolitan like yourself. In rural areas there are often no banks at all. That's the post office's territory.

Budgie: That's the hook for Tesco.
They are not saddled with having to write off huge debts, and so making excessive charges to do so.
Their branch network will cost nothing, as its already in place.
So they would effectively be an internet bank, with internet style cheaper charges, but still a [limited] counter presence.
With some good marketing, something they are already adept at, they should clean up.
And i hadn't even thought about BE's loyalty points idea as an added sweetener to switch.

I rarely go into my own local bank branch. If it wasn't for the business transactions I wouldn't use it at all, banking online, getting cashback and so on. But that local bank is always packed.

Yes, it is packed, Bill but out of sheer bloodymindedness I go in, in an attempt to keep the illusion of face to face banking going.

BQ - then the regulator needs to toughen up then!