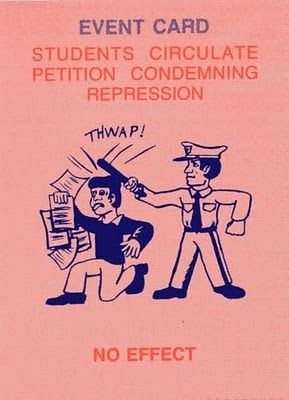 From one of my favourite, backstabbing boardgames.
JUNTA by West end Games
{an 80's classic that has been re-released as a board and a card game.}

When I played this with my brothers we couldn't see the point of this event card and so threw it away.

For a riot of which the police allegedly had no prior intelligence, it seemd odd that there were so VERY many photographers clustered round to witness the ninny kicking in a window, and doing nothing about it except pull their camera triggers.

Perhaps the police could arrest the Press photographers, on the legal principle of "Qui tacet, consentire". And whenit has been established that the police did indeed know what was going to happen, perhaps another force might arrest some of the Met, on the same principle.

Let's face it, this was one of those 60s/70s-style middle-class "happenings"; a bit retro, really, and never as good as the original; like Woodstock Two. You can't go back again.

Now if it had been a really serious riot, one that might permanently deal with the ruin-the-country banksters, the sell-out-the country politicians and the distract-and-lie-to-and-mislead-the-country cosy-up-to the Establishment journos... but no, I'm too old and soft.

It beats me why the coppers couldn't have foreseen those events being at the very least a possibility and positioned a few officers inside the building equipped with gas-masks and a very generous supply of tear gas grenades. Those students would have been a lot less trouble had the inside of the building been given a faint haze of tear-gas before the trouble got going.

I too am still puzzled by the lack of police and lack of awareness.
50,000 sounds like quite a lot for a demo. Especially if its full of hot headed students and lefty anarchists.
Inspector gadget, who I rely on for the copper's view, thinks its all our own fault for Tomlinson. You either prevent a riot or you don't. You can't arrest every PC who gives out a slap and then expect same to face up to a 100 times their numbers with nothing more than a smile.
If you can't 'kettle' up protesters until they are so hungry and tired and bored that they want to go home, then what can you do?

Answer seems to be let them riot and arrest a few later off the back of CCTV.

I remember playing that game with friends in my university days...oh the irony!