BP and the Bear 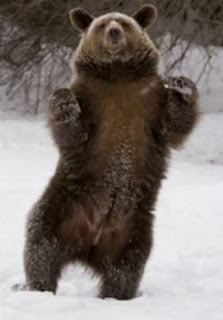 BP isn't the first of the oil majors to make an attempt on Russian riches - they've all proved embarrassingly willing to hurl themselves into this riskiest of regions. Political risk, that is: Russians hate bargaining from a position of weakness (as they were forced to a decade ago in all manner of transactions) and will always undo such deals ruthlessly as soon as the opportunity presents - as Shell, Exxon, Texaco, Marathon, ... and indeed BP themselves have learned to their cost.

Yes, BP has been here before, and not very long ago, with TNK-BP, a venture carried through in spite of many voices warning of the downside. It didn't last long in its original form, before the Russians 'renegotiated' it.

This time, of course, BP was in a poor position from the start, which is how Russians like things. But that doesn't mean it's a bad deal. BP isn't the first player to essay the "with one bound, he was free" strategy. Enron, for example, was nearly out for the count in 1987, but rolled the dice one last time - or rather, twice - with bold moves overseas and into financial trading, both entirely new ventures for an over-extended US gas pipeline company. They paid off.

What BP has done is something that is always attractive to the Russians, who truly hate parting with cash. They have handed over a slice of something tangible & strongly cash-generative (i.e. BP itself) in return for a hard-to-value Russian upstream asset, of which Mr Putin has more than enough. E.on, Russia's long-time best friend in Germany (a dubious honour) has regularly done the same thing: it always goes down well in Moscow, playing strongly to their pride as well as their parsimony.

And sometimes it even pays off ! Not necessarily beyond the wildest dreams of avarice - that would trigger another 'renegotiation', but the upside could potentially be solid.

The downside, of course, as many have quickly said, is that it pisses off the Americans good and proper.

Mr Putin likes that, too.

As EK notes, why should BP give a monkey's what the US government thinks of it right now?

most of BP's revenues ceom from the US. Good luck to them moving East - won't be tempted to part with my money for them.

It is a way for BP to protect itself from an unwanted total takeover (American or Chinese), as well as expanding its asset base. BP it is a wounded beast and, like Barclays £7 billion Qatar deal, has to take succour where it can.

I hope they do find a shed load of oil under the arctic!

Will someone please delete the vile off topic troll?

Going back on topic, it strikes me (with my limited knowledge of the energy business) that this is basically a good deal for BP, and if it does piss Obummer off, so much the better.

SL, about 90% of the world's population are surely hoping for a large new supply!