That 'Carbon Plan' In Full 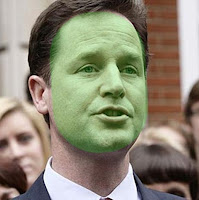 Another week, another enormous government tome on how we are going to 'de-carbonise'. Today's edition (which contains literally nothing new) is the post-Barnsley "Clegg-is-Panicking Remix", cobbled together from every government department's to-do list that is related in any way to the environment. (Sample 'Action Items' from the list of 187 dynamic measures being taken: "Examine the operation of the energy performance of buildings regime"; "Respond to Committee on Climate Change recommendations").

One could have enormous fun at its expense, but let's just get down to business - an early paragraph that reads as follows (from section 1.5):

Be Fair [sic]: there will inevitably be costs to Government, business and individuals in making such a significant change. These costs will be lower than the alternative of dealing with the cost of unmitigated climate change and offset by maximizing the growth opportunities from a low carbon transition, but they will still be real

And right there, we have the flaw. There is no way on earth of establishing ahead of time whether these costs (and they will be 'real', all right - hundreds of billions) will "be lower than the alternative of dealing with unmitigated climate change": it is the merest statement of hope and blind faith. Why ? Because, whether or not you accept AGW, the UK's actions alone are not going to mitigate climate change ! Therefore, at best, it all depends upon getting every other major nation on the planet to do likewise - which we can have no certainty about whatsoever (even if another of the Action Items is "Encourage the European Commission to set out a vision").

Indeed, we can be almost certain that for every unit of UK industrial production that closes in the face of these real costs, a more CO2-intensive unit in China or India takes its place - meaning we actually make matters worse. So the most likely scenario is, we'll be dealing with more-or-less unmitigated climate change anyway.

It is like believing that burglars are active, & then advocating the installation of the world's most expensive lock for your front gate - while having no walls, fences, or locks on any of your doors.

Clegg launched this document today with the cry: "we want to be the greenest government ever". No fears on that score, mate.

There was a freaky EU debate where mention of closed committees was discussed as an aid to transparency. Finland & Sweden good examples - sounds like a goer.

Bang on the money. And the people advocating it (Nick Clegg, Colin Firth et al) won't be sacrificing their standard of living over it.

And I'll give another reason the whole idea is BS.

The UK is a global economy. Without globalism the UK is nothing and the best we can hope for is an agrarian society. Think 1400's. Our society imports almost all of our manufactured goods. Even if we manufactured all our goods here, we still need imported minerals.

The UK used most of its minerals in the days of the empire. So where do we get the rare earth minerals to manufacture computers, magnets (wind turbines, tidal, wave, electric engines)? where are our lithium reserves to make batteries? where are our copper reserves for all things electrical? Where are our iron reserves to make... well almost everything? Where are our mercury reserves to make CFL's (LEDs require rare earth’s). And even if we did somehow magically discover all the minerals we require, where is the energy to mine & refine them? Complete guesstimate - But to manufacture all the goods key to our society AND mine and refine all the imaginary minerals would easily double the UK's current energy requirement, possibly triple.

The green answer is simple – just recycle. But that is so naive I dont know where to start. Yes you can recycle glass easy enough, but we have plenty of silicon (sand). Yes we can recycle paper (to a point – the paper fibres degenerate). Did they miss the history of 1600's. (THE UK RAN OUT OF WOOD. Coal saved our butts. Iron smelting almost collapsed with shortages of charcoal, before a smart Brit discovered you can convert coal into coke.). My notebook uses tiny amounts of rare earth minerals - so tiny in fact that the energy required to extract and purify them is astronomical (fighting against entropy).

And I have not even touched on one of the major modern breakthroughs – modern pharmaceuticals. Have you ever had to take antibiotics? Survived cancer? Sorry your [f-bomb] dead in cleggs world. (Modern chemistry requires all sorts of key catalysts. Platinum for example.) Had bones pinned together after a bad accident. Sorry your a [f-bomb] cripple in cleggs world.

When (if) China, India or the US invents a energy source dense enough to support mining & mineral purification, that energy source is going to be cheap. So what? then we have bankrupted the UK going green just to save East-Anglia. Woop-de-do. Ohh and AGW.... The greens forecast for co2 in 2050 is based on..... 130+ m/bbl per day oil. Or rather an infinite supply of fossil fuels. And twat clegg thinks there is no difference between global warming & peak oil. Were getting rid of the fossil fuels so whats that problem - Easy too many idiots with a PPE degree and no engineers or scientists in politics.

If you plan for a future for your family either leave the UK, or learn how to farm. Oh and short the GBP is going to fall faster than a lead brick at 50'000 feet.

Dick - optimist that I am, I have some hopes for Herr Oettinger, actually

Thanks, Kev. at $130 the affordability / inflation issue will start to overwhelm the green thing in my view (GDP trumps GHG): Osborne vs Clegg - watch for the Budget

Alan - feel free, it's what the comments are for ! (guest article, perhaps ?)

particularly a high-quality, high-content rant like that - you are 100% right about trade

I have said in these columns before: if we are worried about relying on imports of gas, well tough, we are an importing nation & the answers are:
(a) diversify the sources (as Churchill famously said about oil);
(b) boost the Navy & deal with pirates mercilessly as in days of yore;
(c) strongly promote free trade & open markets (Herr Oettinger again);
(d) get your trade policy in order. It's difficult but not impossible to deal with the Russians: at the end of the day we need the gas & they need the money (and have actually been a reliable exporter - more reliable than wind-power!), which isn't a bad basis for trade ...

Follow the money. Have you looked at the trade in carbon credits?

We'd probably be better off if we planned to move our cities inland a bit or at least put in good flood defences as the sea level is rising faster then expected according to today's BBC website (because of melting ice principally in the arctic and Greenland) Alternatively some might argue that drowning the Westminster village would actually be a good thing.

Tim Worstall book on the economics of this is excellent.

CU - Thanks for the pointer, I had missed that one, just buying the book now...

Jan you can't trust the MSM on climate science, especially the BBC.

And besides they are only talking about 5.7 inches in 40 years. (as if they can predict that precisely anyway)

A better report with extensive references is here:
http://wattsupwiththat.com/2011/03/10/why-im-not-worried-about-greenlands-icecap/