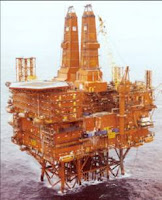 The hastily-cobbled North Sea windfall tax is a black mark against Osborne, though not necessarily for the reason the oil lobbyists would have us believe.

It's dumb because (a) any hasty intervention into the incredibly complex N.Sea taxation regime is bound to go wrong; (b) it was motivated by a determination to do some sort of very noisy, attention-grabbing hand-brake turn on Fuel Duty; (c) Osborne started rowing back on it immediately, thereby confirming the impression it's ill thought out.

But, CU's anguish notwithstanding, we shouldn't rush to accept at face value the oil companies' protestations that they'll stop drilling forthwith ("pause and reflect", my arse). As an old oil-man myself I have trooped to the Treasury on many occasions, crying wolf with the best of them. Confident politicians see this special pleading for what it is.

It's a fact that oil companies the world over fully expect that when windfalls accrue - especially from oil price increases that they have in no sense budgeted upon - windfall taxes are never far behind. They know it, they expect it, & they kick up a fuss for the sake of form.

So - can't lose sleep over this, even though the Law of Unexpected Consequences is in full swing and something daft will probably come of it all. But no dafter than the rest of the shambolic 'energy policy'. I see that Huhne is at loggerheads with Clegg on nukes, calling him a headless chicken, no less. Kinda amusing ... Huhne ... chicken ... Huhn ... no ? Well I thought it was funny.

Email ThisBlogThis!Share to TwitterShare to FacebookShare to Pinterest
Labels: Energy and Industry, Politicians at work, price of oil

Nick, you mean there is actually an 'energy policy'? I thought it was something Huhne made up day by day.

When are you going to cover the Green Investment Bank - or PFI(2)?

Mind you, I think windfall taxes are wrong. If you strike lucky, what's that to anyone else? You'll still pay tax on revenue later.

All forms of double taxation stink.

Say I tried to run a business and despite my best efforts and throwing my own money at it it fails.

Can I get money back from the government ?

Yet as soon as I start making money ...

The coalition seems to spend a lot of time and effort rowing backwards from policy announcements. Is that because of the nature of coalition or because stuff is announced on the hoof and then repented at leisure?

EK, the point of a windfall tax is not to penalise your efforts but to capture some of the unexpected gain which was not due to your efforts...

Anon - we've done Barker at your insistence, but you're never satisfied, are you ?! As always, we are happy to have interesting info dropped into comments, or our dead-letterbox: join our good friend Mr W & give us the low-down!

James, EK - as an entrepreneur myself I know the frustration, BUT - there is such a thing as a deal that's too good ... things find their own level

BE - for a while I thought that Cameron's relative willingness to say sorry, we got it wrong was a sign of maturity, in refreshing contrast to Brown

but like you say, when it starts to become a habit ...