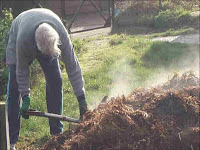 We have long had a soft spot for Chris 'Crapper' Huhne - to be exact, round the back of one of his highly-subsidised anaerobic digestion schemes. But from marginal figure of fun in recondite energy circles he is fast becoming a high-profile political liability, what with the AV campaign and various other headlines (and, err, non-headlines) we could unkindly allude to.

In normal circumstances this might encourage a politician to go quiet for a bit, which is clearly what those who are firing shots across his bows are hoping. But since Huhne aspires to lead the LibDems, and fears they might skip a generation to Tim Farron, he seems pretty determined to keep his banner flying.

We therefore wait with bated breath for his U-turn on nuclear power. Come on, Chris, you know it makes sense ! With a bit of clever footwork you can make a real name for yourself here, within the LibDems 'ranks' and beyond.

How about this. You are a firm adherent to the letter of the Coalition Agreement, which says 'no public subsidy' for nukes. You inherited (from Ed Miliband !) a department that you now realise has been thoroughly suborned by the nasty nuclear froggies (boo !) and which has, in a 'ruthless and calculating' way (boo and boo again ! - you see how easy this is, Chris ?) introduced all manner of devious subsidies in the plans they have drawn up for encouraging nukes, and which you nearly fell for. But it's OK ! Just in time, you spent the weekend reading back-issues of C@W and spotted the trap. The Coalition Agreement was a hard-fought document and you are going to ensure it's adhered to - and let no-one stand in your way: no public subsidy for nukes !

This will be popular in all sorts of places, Chris, not least with LibDem activists. And - chapter & verse - it's legit ! Not even disloyal.

For ourselves, we promise to refer to you in considerably more respectful tones from the day you make your announcement.

Indeed Huhne going non-nuclear would be much better politics than Clegg totally reneging on his NHS commitments.

Clegg's solution to the attacks on his integrity over tuition fees seems to be to trash another major promise he made in his manifesto.

The good news is that when Clegg is ousted and the LibDems call an election the only sensible choice will be for a Tory majority government.

So, forgive my ignorance,

Osborne vs Salmond looks like being an entertaining contest

sadly, Andrew, C@W is not deemed worthy of being injuncted, so I have no idea what you are talking about ...