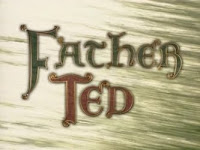 The parochial house on the desolate wasteland that is Maggie Island.
Father Ed Milly, the leading Labour party cleric, is talking to his youthful acolyte, Father Kevin Maguire.

Father Ed is holding up a document, but young, blank faced, Kevin is having difficulty with Father Milly’s explanation.

“These council seat gains were small...But the next election.... is far away..”
“Ok,so, “ said Father McGuire, opening up his Daily mirror.. "I don’t know a thing about politics, but here on Maggie Island, in our own little bubble, we don’t need to.”

“Quite right. “ said Ed, “Let’s just sit back and relax and enjoy our time in opposition. Ahh! This is the life, eh, Kevin? No one asking you to do things, or come up with any “ideas” or dealing with any problems. Isn’t that so Father Jock?” he asked the repulsive old priest, who was dozing in retirement in his rotten, whiskey stained and mars bar crumbed chair.
The sleeping priest of high finance suddenly awoke with a splutter

“Wha..Redistribute!..Tax!..Spend!” Yelled the former cleric of Maggie Island.
“No Father..We’re in opposition now. We’re taking it easy. No more taxing and spending..”
“Tax! Dividing lines! Feck over the Tories...”
“Oh, you shouldn’t have woken him Ed. I’ll get the dartboard.“

Father McGuire set up a dartboard a few feet in front of Father Jock. The old priest pulled out a paint ball gun from beside his chair and fired a magazine off into the grinning picture of Tony Blair stapled over the board. He slumped back in his seat drooling and mumbling about record tractor production.

“We’ve got to get a grip Kevin. No more reckless splurging of the money supply. We’ve got to go on a diet. Get a little leaner. I suggest we give up something..like you know, for lent..”
“Well Ed”, said Father McGuire, “I’ve been looking at our poll ratings for Scotland . They’re not very fat. In fact we’ve lost quite a bit of weight up there.”
“All right Kevin..Ok..”
“A good few million pounds lost there in donations I would have thought. "added McGuire helpfully.
“ALL Right! I know. It’s not good. We did well elsewhere though..” Milly caught sight of Father Kevin’s slightly surprised and doubting face and hurried on..”I mean..well enough..for a bit.. But We need to make ourselves more appealing "
“Like Father Burnham and his make-up?”
“No. Not like that. We need to be more..sort of..statesman like. More responsible. Make ourselves more popular with the congregation. "
“Like Father O’Bama He’s popular. And he’s going on a spending cut. Apparently ‘there’s no money left.’
“Oh that’s right. But I think It was Father Dick Byrne who said that. It’s the right idea though. The flock don’t like the idea of the people getting free houses and free lunches and jobs for life..and golden pensions ...and, only working a day a week..and so on...”

“Ermm..well..sort of..I suppose, ..but the focus groups say the people don’t like the idea of us not having to face reality.”
Father Ed stared into Father Kevin’s smiley, innocent, toddler face.” Mind you..you have never faced reality, have you Kevin?”
“I have Ed! " said the priest indignantly.
“Now Father..Let's recall..You still keep your crunchy nut cornflakes under your pillow in case the Thatcher Snatcher gets them.”
“Ok, fair enough. But one day you’ll be sorry you didn’t do the same, Ed. Remember when all the milk went missing, Ed? And you said you didn’t drink it..And I didn’t and neither did Mrs Eagles or Father Jock?"

“True. But there was an explanation. That big fat cat sitting on the kitchen table licking his lips.”
“Okay, so.” Conceded Kevin.”Whatever happened to that old fat cat, Ed?”
“Bob Diamond? He got an even better job I think. But let’s sort out what we’re going to give up for electability..err..I mean..give up for lent.”

“Well. I’m sure I can cut out a bit of the old lying. In the Daily Mirror. I’m doing far too much of that anyway,” said McGuire.
“Good idea. And I will cut out first class rail travel. Or at least, I’ll change the seat covers so it looks like I have. But what about Father Jock. What are you going to give up Father?” Asked Ed to the spiteful old priest.

“What about cutting back on the old Nokias Father?”..

”Well maybe not,” said Ed, ducking as another phone whizzed over his head. “How about just giving up going to parliament?..Ok? That’s what you can do. So that's us all sorted. A complete spending freeze. No new announcements like laptops for every Christian or lagging all the lofts on Maggie Island. Just a little bit of a snoozey quiet time. Put on the telly Kevin. FLOG IT! is on. I love that show. Lets see which bit of the NHS Andrew Lansley is flogging off today."

But as they sat down to watch, the housekeeper, Mrs Eagles, arrived with a great big plate piled high with union demands and a steaming pot of commitments....

Very good! I look forward to the arrival of Father Balls and his personal choir boy Cooper.

Father Jock has the Hairy Hands.

That's what happens if you keep putting them into other people's pockets.

Communion wine trebles and a biscuit all round.

In the next episode...

Timbo - oh ok then if you insist.