Huhne at the Centre of Two Storms 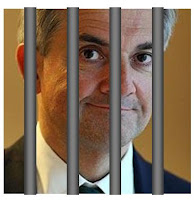 Who'd have thought: C@W favourite Crapper Huhne triumphing over Boy Osborne, Vince-the-Cable and other assorted forces of darkness, to reclaim the grassy green sunlit uplands for the Coalition and, in so doing, prove that the LibDems aren't the waste of space the nation resoundingly believes them to be. Clegg has long favoured discharging the dense green smoke to obscure his uselessness: earlier this year it was the laughable Carbon Plan, and now it is the even more far-fetched Carbon Budget.

(a) he wants us to pay for his flights of fancy through ruinous electricity bills; so ...

(b) ... Osborne has engineered a very necessary get-out clause (which should be invoked at the first opportunity: I could suggest a few, George - straight out of the Coalition agreement)

(c) Huhne lui-meme may not survive to enjoy his 'triumph'

What with EDF limbering up for a massive new PR offensive, manufacturing industry belatedly gearing up to oppose his 'reforms', not to mention the lovely Vicky Pryce and her thoughtful intervention ... it looks like our Christopher and his plans will be centre-stage for a while still to come. Greek tragedy or what ? Couldn't happen to a nicer chap.

Huhne is dangerous scum. Suprised Osbourne has even as much brains as you give him credit for. More brains than that cretin Cameron tho'.

So - not a hypocrite, liar, cheat, deceiver then. Or one who thinks laws are for other people.

Seems like the type of guy we can trust to plan a wind farm near us.

“Columbo? What are you doing here?”

“You Spad sir. He told me you were here. The young man. He said you’d be here. Hiding in the rain barrel at your fifth favourite home.”

“I’m not hiding I was, erm checking..the ..erm..water levels. For climate change. Evaporation and drought and global warming. Anyway, what do you want Columbo? I’ve answered all your questions.”

“Yes sir..that’s true. You indeed answered some of my questions. ”

“Its your wife’s question that bothered me. That’s why I’m here. You see it takes 1 hour to drive from the the London School of economics to Stanstead. I checked that out earlier. "
{crumpled detective consults notebook}.
"Your wife was talking with Dr Strauuss-Khan until 9.40pm. Your plane arrived at 10.23pm. That’s a 60 minute drive from central London, in 43 minutes. And that’s without hats and coats and valet parking and …”

“Maybe she didn’t have a coat?”

“In March sir? In England? I would expect a coat to cover her dress, wouldn’t you sir?”

“Look Columbo. There’s a perfectly reasonable explanation. She ..well..she sped. She broke the speed limit? Big deal. Lots of people do it, don’t they detective?”

“Yes sir” {takes a big draw on his cigar and looks Huhne directly in the eye.}
“Yes sir, I believe they do.”

…..”Well goodnight sir…oh, by the way I love that energy policy. That carbon trading credit scheme. I don’t understand all that stuff, but my wife, well, she thinks you should have been the leader. She says she would have voted for you. She’s a Democrat you know. Any way..goodnight sir.”

“Won’t you have a drink Columbo?”

“Ohh, that’s very kind sir, but no. I have to get down to TalkTalk and look through the phone records. And there’s some events coordinators to interview. And I need to check the airport landing times, and the weather for that day. So no. But thank you for offering. ..Well..I won’t bother you again sir. ……….
….Well, at least not tonight anyways…….”

Apparently all Huhne's green dream is only going to cost us an extra pound per week. So that's all right, then.

That wasn't wasted on me BQ.

Genius. It was as thought the one-eye, cigar and trench coat were in the room with us.