Obama At The Controls ? 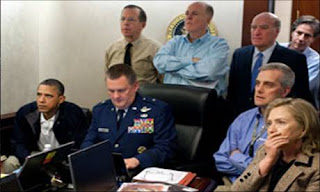 Like Churchill, Lyndon Johnson was a meddler in military affairs - the bane (baine?) of his generals as he tried to micro-manage the Vietnam war, phoney Silver Star and all. His interventions were more or less by telephone.

By contrast, George Bush Snr - a genuine WW2 aviator of considerable distinction - contented himself with setting policy for Gulf War 1 and building a remarkable coalition to prosecute it. Then he let his generals get on with it. The temptation for him to interfere could have been great because by 1990 the technology was in place for real-time televisual involvement via satellite links of all kinds: from land bases to aerial recce planes to early-model drones - the first computer-gamers' war. (I know because, err, I do.)

But he left well alone. For a man of several failings*, George H.W. conducted himself impeccably as Commander-in-Chief of a great democracy's war machine.

Interesting, then, to see today's pics of Obama & Clinton et al watching proceedings chez OBL. The photos seem to show him as a spectator - albeit one with a massive interest in the outcome. Did he just watch & keep his peace ? If so, it speaks well for him - and is the better for us.


*Including, arguably, his judgment to call a halt to ops on the road to Baghdad.

On the whole halt thing.
It really can't be blamed on bush Snr.. He didn't have a mandate for Iraq, only Kuwait. The coalition, brilliantly built, might not have survived an invasion.
And he hadn't planned for an invasion either. There was no doubt the coalition armour could be in Baghdad in days, but what then? As we know, that's the hard bit.

But even more than that was the slaughter on the highway. As Iraqi troops fled Kuwait they were caught by airstrike and a three mile convoy was annihilated.
Thousands dead.

At this point the media stepped in with headlines saying coalition troops were massacring fleeing soldiers in defiance of the Geneva convention and I even remember one {probably the Guardian} comparing the attack to Dresden.
The phone ins next day were full of stop the war voices.

That is forgotten now, but at the time it did seem that the job was done, without a full blown middle east war erupting and Saddam's days were numbered.

So, Bush was right to call a halt.
Even if the result was a bad one.

UN Resolution 660 laid down the terms of the mission.

Point 2. Demands that Iraq withdraw immediately and unconditionally all
its forces to the positions in which they were located on 1 August 1990

I think you are right

another of history's if onlies

One wonders whether Pa Bush may also have been more aware of the danger over the border in Iran. Who must have been overjoyed when we went in and took Baghdad and Saddam, as it gave them free rein to do what they do best. Bush Junior would not, I think, have been able to make those tiny little leaps of Real Politik imagination which perceived a cornered Saddam as far less of a threat than an unconstrained Iran.

From your Frome Correspondent.

(have you seen where all that gas we get from Qatar originates ?)

then again, I'm not clear that Iran is immune from the 'Arab Spring' (even though, as they will angrily tell you, they are not Arabs)

best wishes to all in Frome !

Say what you like about the principles on which Obama operates (not quite mine, but I'd prefer him to any Republican challenger I can think of) but as a politician he's far better than anyone gives him credit for.

Time and again he's pulled back from the brink, wrongfooted opponents, even after a fairly inevitable defeat in November, and now positioned himself for a win in 2012.

He will have authorised and meticulously followed this operation, waving through every major decision (keeping it all totally secret), resisted the temptation to micromanage, gone to huge risks to his own credibility (just imagine the Repug reaction if the operation had failed), and executed the whole thing perfectly.

A picture says more than I could:

You're right ND. I've never served in the military, but speaking as a bureaucrat I couldn't agree more that these politicans should leave me alone and let me get on with doing things my way :)