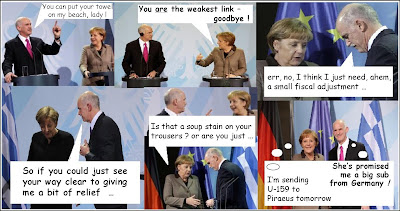 Excellent Nick! To think I'd never noticed the resemblance until that 'Weakest Link' gag.

What kind of frugality can we expect from a people who smashes up their plates just because they've enjoyed a good meal ?

Mere sticking plaster which will not cure the underlying problems.

People didn't seriously expect the biggest economic dip since the 1930's crash to be magic-ed away with with a bit of inflation did they ?

Kev - I am with you on this: even if you see the actions taken in 2008 as a bit more than sticking-plaster, it was always inconceivable to me that they got it right first time

so it's gold for me (despite CU's skepticism)

Philipa I would be only too pleased to take a gander but you seem to have gone all coy chez toi...

anyway, glad you have good news! because let's face it there ain't much around