History corner. The trouble with the press 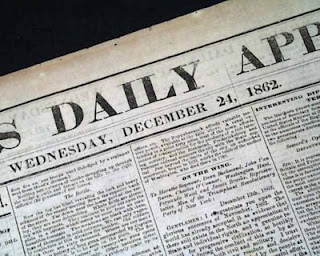 "If I had my choice I would kill every reporter in the world but I am sure we would be getting reports from Hell before breakfast. "
General William Sherman.1864
Very early in his war career the Cincinnati Commercial newspaper described Sherman as "insane." On the strength of those newspaper reports the secretary of war, Simon Cameron, went to see Sherman and recommended his removal. Sherman was suffering from a nervous breakdown.

Appointed to high command at the start of the civil war in 1861 the pressures of that command and the worry caused him acute stress. Newspapers reported he was drunk and deranged. He had a very bad press. But, after a short recuperation, he returned to his troops and subsequently rose to the second highest command in the army and was instrumental in winning the war.
But he never forgave the newsmen, even when they turned from reviling him to hailing him as a new Caesar.

The civil war was the first real media covered war. Pressmen had been in the Crimea in 1851. And Russell's reports for the Times broke the scandals of mismanagement, malaise, neglect and the terrible conditions in the hospitals that caused Florence nightingale to book passage. But the civil war was fought within fairly easy telegraph reach of the printing presses. News was generally received next day, or the day after an event. And the public were reading broadsheets at the same time as the politicians were reading the official cables. The civil war was the first war fought under the full glare of the media. There was even a full blown presidential election campaign and election run whilst the country was divided and the war raged.

Sherman is known for his hatred of the newspapers and he wrote a well observed piece that if put into slightly more modern language could pass today.

“Newspaper correspondents with an army, as a rule, are mischievous. They are the world's gossips, pick up and retail the camp scandal, and gradually drift to the headquarters of some general, who finds it easier to make reputation at home than with his own corps or division. They are also tempted to prophesy events and state facts which, to an enemy, reveal a purpose in time to guard against it. Moreover, they are always bound to see facts colored by the partisan or political character of their own patrons, and thus bring army officers into the political controversies of the day, which are always mischievous and wrong.

Yet, so greedy are the people at large for war news, that it is doubtful whether any army commander can exclude all reporters, without bringing down on himself a clamor that may imperil his own safety. Time and moderation must bring a just solution to this modern difficulty.”

Incidentally, the secretary of war, Simon Cameron, who insisted Sherman was relieved , was himself relieved of his office a year later, after newspapers continuously reported his corruption.
The President was told that Cameron was so corrupt, "He would steal a red hot stove."
The eternal dilemma of having a free press. They make stuff up, exaggerate, pander,are politicised, and generally behave terribly. But occasionally they expose genuine corruption and wrongdoing.
Posted by Bill Quango MP

Email ThisBlogThis!Share to TwitterShare to FacebookShare to Pinterest
Labels: News of the World

So... In the words of the Moody Blues: "Nothing changes and nothing stays the same"

God how these bastards are enjoying the prospect of getting the press off their backs, and their snouts back in the trough

I think you're understating the general good a free press does for us, BQ.

In our single-party State the press has often been the true opposition. I'm eternally thankful for it and will miss it when it goes.

I think that just because the police, for example, occasionally catch a burglar (or is it really an urban myth?) they shouldn't be free of regulation, and any policeman indulging in moral-free behaviour, like bullying or persecution of the public, should be chained in the town square and left to the whims of the public. Same with journos. In fact I wonder if the police will now look kindly on the public chaining the journo of their choice and punishing them severely? I've got a list.....

The problem is that some of them would like it, Pips.

Trust me. Having been there I know.

They're a necessary evil, Bill. Even a half-free press is better than none.

You've indulged in S&M with the police or a journo, Kev? The mind boggles ;-)