Yes, our favourite comedy act is back on the road.

How we all laughed.

Now, your turn. Compo: what is the fun-loving Frau saying this time ? Answers in the comments, please. 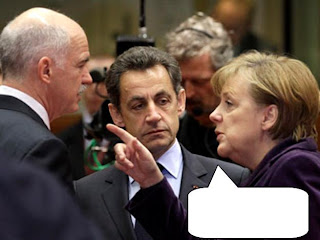 Prize - a genuine "Merkel" bailout + austerity package of your very own ! Worth over € 120 billion !!

(Must be over 18, have own parliamentary majority, no referendums or plebiscites, the decision of the German Constitutional Court is final, euro may go down as well as up)

Pointing out the obvious said...

You see what you've done? Now I have to give this little Frog 500 billion!

Gordon Brown would only ask for half the amount you're looking for... and he has a nicer smile.

We were offering you a bung, not a bunga-bunga.

And don't give your serfs a referendum on this, we never do!

Remember, Paps, that's my towel laid out on your country now.

For you, Stavros, ze euro is over.

Sarkozy is thinking...
"You know...Now I look closer...Silvio was right..She does have a beard."

Don't bother with Cameron..Every time I made a suggestion he just went like this and said 'pull my finger?'

You can bugger off with your democracy anyone would think you invented it.

You look like you don't need any more haircuts, baldy!

You sly dog. Let me give you a hug.
Jim

You were not supposed to go Greek on us!