Remind Me, Where is Qatar ?

These days we get a lot of our gas from Qatar - sometimes as much as a quarter - more even than from Norway. LNG trade is increasingly important worldwide; see this from Shell for RUSI. Mercifully, supply is becoming ever more diversified: but Qatar is the biggest global producer.

And where exactly is the source of all that LNG ? It's here.
The world's largest g 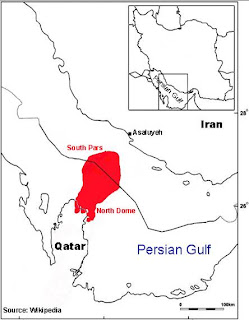 as field, shared between Qatar and ... Iran. Oo-err. And the UAE have screwed up the oil pipeline project that could by-pass the Straits of Hormuz: $200/bbl, anyone ?

So à propos of CU's latest post, and BQ's on US defence priorities: perhaps we shall find ourselves 'engaged' in the Gulf again shortly, at the instigation of the USA, and probably with quite a few 'interested parties' egging us on.

Here we go again. National interests at stake ? - well, in this instance at least the case could be made. Now, about that shale gas ...
ND

Yes, well, when we have energy run by that prize pair of dim eco-loons Cameron and Huhne, what can you expect?

I understand that the new type 45 destroyer is going to the straits, but then we haven't got much else to send since the dim eco-loon Cameron scrapped the perfectly serviceable aircraft carriers we used to have.

A significant part of demand increase is from Japan, to make up for nuclear plant not running. I see only 5 of their 54 reactors are still running - the local population is fiercely against reactors restarting after refuelling - so LNG and oil is the makeup. Looks like the Japanese new nuclear industry, at least, is toast now: "One thing both pronuclear and antinuclear activists agree on is that there is virtually no chance any new reactors will be built in the foreseeable future."

I recall when they were the Trucial States and bright young officers would volunteer for service there to boost their promotion hopes. How times change.

Shame about that pipeline. Even the Russians and the Europeans managed to build an incredible network criss crossing the whole continent and the North Sea a few times.

Interesting disparity in gas prices from $2.66 per MMBtu in Nymex February futures, and $17 per MMBtu Asian LNG spot price. Why don't those yanks build LNG production plants so we can all get more underpriced US gas?

MW - yes, laying pipelines has been a doddle for many years now and one has to wonder just WTF is going on there

RW - the yanks have permitted gas export (which requires a special licence there) and the first new LNG liquefaction plant can't be far behind (at present, 'export' = turning around a full LNG vessel that has already arrived in US waters)

before Fukushima, the Qataris and Exxon et al who built the kit were beginning to wonder if they had stranded assets on their hands

Budgie - it's the symbolism though, isn't it? one White Ensign, a couple of Typhoons and an SAS patrol count disproportionately, so far as the Americans are concerned

ND, so the U.S. is against the free market, as far as natural gas exports go!

I see there is the Industrial Energy Consumers of America (IECA) and the American Public Gas Association (APGA) that lobby against the issue of LNG export licences to anywhere outside U.S. free trade zones, to prevent domestic prices rising. Hmm.

I didn't read the article you linked to quite that way:

Exports to free trade partners are granted almost automatically ... DOE/FE insisted prices were not relevant to its decision. DOE/FE is not a price manager.

DOE/FE guidelines require "the market, not government, should determine the price and other terms for imported or exported natural gas. The federal government's primary responsibility ... will be to evaluate the need for the gas and whether the import or export arrangement will provide the gas on a competitively priced basis ... while minimising regulatory impediments to a freely operating market"

ND - what think you of Where Soldiers Fear To Tread, Ranulph Fiennes memoir of service in Dhofar in the late 60s/early 70s ?

very much enjoyed Sultan in Oman by Jan / James Morris

Thank you so much! Really rich content and very useful information. I found my problem’s solution starting over here.
www.laromitaschoolofart.org |

A very good and informative article indeed . It helps me a lot to enhance my knowledge, I really like the way the writer presented his views. I hope to see more informative and useful articles in future.

Mate this is a very nice blog here. I wanted to comment & say that I enjoyed reading your posts & they are all very well written out. You make blogging look easy lol I’ll attemp to start a blog later today and I hope it’s half as good as your blog! Much success to you!
http://www.myhavenhomes.com |

Hi, just wanted to mention, I liked this post. It was helpful. Keep on posting!
Away Health Club |