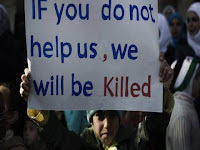 I'm constantly amazed at how bad China is at playing international power politics, when it is the economically-weakened West that is - or logically should be - on the back foot. Russia is as bad, though less surprising. The current BBC2 Putin series is replete with examples; and I've commented before how feebly China reacted to events in Libya, where they had invested (and then lost) a great deal.

Now they are busily putting themselves on the wrong side of history over Syria. Funnily enough, as Marxists (if only by long boyhood training) they should have a better grasp of how real can be the impact of popular revolutions. Didn't they used to be 'progressive' ?

In practice, all they can think about is: we really don't like the idea that regimes can change, at which point, maintaining the status quo is everything. This puts them on a par with the geriatric, paranoid House of Saud and is even feebler than the old American cry of we'll support anyone who can keep the Commies out. At least there was a modicum of flexibility to US realpolitik: if someone even better-placed to keep the Commies out happened along, they were willing to switch horses.

It's atavistic with the Russians, they are incorrigible; but one understands the Chinese are determined to learn - and deploy - the techniques of soft power. They've a way to go, and we should be glad of that.

The West has been weakened more than economically. Some of the former 'West' is feeling it had better make its alliances in its own interest, and change its systems of defence.

And why the "progessive" West is cheering on the "rebels" in Syria when they profess to want freedom for all is a mystery to me. See here.

MI six and a quarter said...

The Ruskies veto-ed the UN resolution on Syria so that, when the doodoo hits the whirly thing when the forthcoming elections in Russia are found once again to be rigged in favour of macho-man Puss in Boots, they will use Syria as a precedent to put down the inevitable uprising which will follow.

Good article. So your theory is that the Russians are basically irrational in choosing whom to support?

No - I think that the theory is that, basically, the Russians are irrational. Full stop.

this isn't about syria it is about turkey and iran. your analysis is flawed : neither russia or china want a weakened iran or a stronger turkey.

anon - we may not be in disagreement on the fundamentals: if you check the link to my earlier piece (on Libya), I concluded:

Stronger Turkey is a given, and Russia is trading with it purposefully. I don't know the detailed dynamics between Syria and Iran: please tell us more

Mark, Elby - the Russians are hard-wired for win-lose politics on a chess-playing model which dull their subtlety and limits their flexibility

but even more particularly they have no concept of popular mandate: kto kvo, and might is right ...

Lil - but can 'we' prop up Arab dictators indefinitely ?

HG - which of the 'former West' did you have in mind ?

I am less worried about the Marxists (except that Russia and China are now(?) national socialists) than I am about the Islamists.

Your whole theory rests on the idea that GDP = power, as if GDP was a measure of anything other than your ability to print money and get into debt. If that were true Ireland would be far more powerful than Germany as its GDP per head is far greater (Its GNP is far lower however).

China holds Renimbi in the open market in short supply thus keeping its exchange rate high enabling the Chinese government to print more Renimbi for its US bond purchase program. If China was printing money on the scale it is in open market operations its currency would be through the floor. The audacity is that China is printing money and creating debt at a huge rate but has fooled the world into believing its currency exchange rate is TOO LOW!

Meanwhile China's whole economy rests on the idea that by purchasing expensive silicon chips that make up 90% of the cost of a product and then adding a little bit of home labour they can sell expensive laptops that contribute directly to GDP. Put another way (based on my own figures in my own outsourcing activity in China) if I make an electronic product in Europe that costs me £1000 then it would be £1000 added to EU GDP and £1000 of real wealth would be created in the EU. If I outsource to China the way GDP is calculated it would mean the product was still worth £1000 in EU and would show up as £1000 in EU GDP figures BUT it would at the same time show up as worth £1000 in China's GDP figures. In reality only £100, maybe less, has stayed in China, the other £900 has been made in the EU. The only real wealth the Chinese have is caused by the same factory turning out China badged product for their local market sold at local prices. Don't forget also that local Chinese expansion of production and infra-structure has been funded by increase government and private debt on a massive scale that also shows up on the Chinese GDP figures.

It is this ridiculous double-counting and mis-allocation of wealth that gives outsourcing countries like Ireland and China more perceived "wealth" that in reality they can't justify and which has led to a very hard landing in the case of Ireland already and a hard-landing to follow in the near future in China.

It is only a few years ago that we had the same fears about Japan (now sinking into the mud), then it was the Pacific Rim countries like South Korea (remember that one?). Now it is China and somehow we believe the same crap, even though they aren't making anything new - it's all stuff that used to be made in Japan and Korea,, it never was made in the West.

v interesting, anon, thanks for the economic analysis

I'm not sure it gets to my opening sentence

Your whole theory rests on the idea that GDP = power

au contraire, my thesis is that power = the ability (including the will) to project disciplined bodies of uniformed men abroad with guns, effectively

we still have it; I don't really see why they haven't

(I recognise, of course, that this may simply be proof of how big is the monkey on their back ...)