That Anglo-French 'Nuclear Deal' In Full 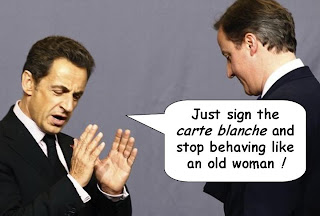 Readers may recall that Centrica foolishly bought into British Energy after EDF acquired it a few years ago, and likewise into EDF's supposed plans to build 4 new nukes in the UK, part of the fleet of 10 (sic) that Huhne wanted to see built. The Telegraph reports that 'Centrica faces big questions' arising from the rather insubstantial Cameron-Sarkozy nuclear deal last week, and they suggest a few:

- what happens if Sarkozy loses to the (anti-nuke) Socialists ?
- does EDF have the necessary credit rating (being essentially an arm of the down-rated French state) ?
- new nukes depend on subsidies; and Huhne's plan was to give 'em a guaranteed inflated electricity price via a combination of feed-in tariffs and contracts-for-difference, but at an as-yet unknown strike price. When is the UK government going to show the dog the rabbit ?

Centrica management, the Telegraph says, "might need to reassure the City that its nuclear ambitions remain on track to create expected returns".

Let's throw in a few more questions, which may be of interest to more than just Centrica and its investors.

- what design is EDF going to settle on, given the nightmares its initial choice (the EPR) is suffering; and when ? If they are going to change the design there will be a lengthy new approval process
- when will EDF be able to say how much guaranteed £££ will be enough to satisfy its endlessly escalating needs ?
- who specifically is going to be the contracting party to these goldmine CFDs etc: the 'Big 6' ? - anyone looked at their balance sheets recently ? The Government ? - illegal (and why would the rest of the EU, now firmly nuke-skeptic or positively anti-nuke, wish to humour France ?)
- why didn't China make a single new nuke project-start in 2011 ?
- just what is going on at Fukushima ?
- how long before it becomes obvious that UK plc just has to get on and build something else to prevent blackouts ?

One could keep this going all night. Seems to me Centrica needs to "reassure the City" that it will be having serious second thoughts.

Perhaps becuase the >25 they are already building are as many as they can handle at one time.
World Nuclear Assoc.

The Anglo-French nuclear deal has to be a front for some Brussells goings-on.

Reading between the lines, are you trying to say that the whole thing is totally uneconomic, or have I missed something?

Brian - sounds interesting, any further details ? the balance of EU opinion seems pretty negative these days. My alternative hypothesis is that Sarkozy & Cameron are each, in their own way, desperate to find something to agree on: anything, really

Mark - need to define 'economic' quite carefully, and it's pretty clouded here. How are end-of-life liabilities to be assessed ? Security of supply ? etc etc: huge numbers, prove anything you like by picking the right assumptions

I have nothing against nukes per se, only unacknowledged subsidies (always), and subsidies in general (usually)

I am also an empiricist and when I see nothing being done, year after year (despite all the loud noises and massive lobbying) I am inclined to assume it's bollocks

I'm anti-anti-nuclear but I can't be pro-nuclear because the economics are opaque. Even if they were made transparent, they'd turn out to be sensitive to government fiats on the risks of radiation, which seem to be based on nothing worthy of the name of science. Shambolic!

The quick solution to the electricity problem is to leave the EU and tear up all the EU- and self-imposed CO2 bollocks laws.

Too tired to go into in detail, but if we can start building Nuclear in 1953, we sure ought to be able to do it in 2013, 60 years later. And the first generations of Nuclear served us well.

Cameron encourages National Grid (or whatever it is called now) to build a much fatter cross-channel interlink and EDF builds lots of new nuclear capacity in Calais.

French retail electricity is much cheaper than in the UK because the French state writes off its infrastructure capital investments but the UK tries to make infrastructure investment look like it has a business case.

This way the UK pre-buys its leccy from the French for much less than we can generate it ourselves and the French get a premium on what they would sell it to their own consumers.

Sarko says "I've created x thousand jobs in the depressed bit of the French rustbelt" and Cam says "I've secured our supplies and not had to kill everyone with dangerous radiation*".

* which is what far too many stupid people worry about

On what is going on at Fukushima, they had an unexpected temperature spike on Unit 2 earlier this month, but some hope this may be because of a faulty thermometer. They've only recently been able to get a camera (borescope) into the top of a pressure vessel, but cannot yet see down to the mess at the bottom.

TEPCO has come up with a 40-year decommission plan for Fukushima. I've seen numbers that suggest that the decommissioning costs are equiv to 25% to 50% extra on the cost of all nuclear energy ever generated in Japan, but not the underlying assumption - depending on how you use discount rates you can come up with a wide variation in this kind of analysis. With 12% discount rates into infinity, an enormously expensive disaster in 40 years time costs little in Net Present Value!

NB The imminent nuclear power "energy gap" mirage (other than in the media) is predictably sliding years out with EDF announcing plans for longer 7-year life extensions for our existing UK AGRs. Bet that won't get the coverage in the presses that the nuclear energy gap did.