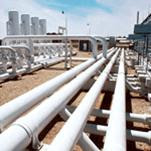 The other big energy story I missed the start of, is the prospective tanker-drivers' nonsense. As it happens I don't think the government has done much wrong, however easy it is to sneer & make low-grade political capital. The miners' strike demonstrated rather dramatically that inventory is everything in this game, and a fortnight of panic buying may treble the inventory and reduce consumption, too. Won't win the battle on its own, but it sure helps: and recognising the importance of this (of which more anon) is straight from the Tony Blair play-book.

We should also elevate our gaze to the price of crude oil. It has been range-bound for many weeks now, as have several other key commodities, and despite a recent spate of stories stressing how much oil there is on the planet I'd say a break-out in the upwards direction looks by far the most likely (just MHO etc etc). In fact the stories reinforce my view, since they look orchestrated - all of a piece with the Cameron/Obama summit and various other indicators of trouble in the pipeline, so to speak. Steep backwardation, too: and all at a time of countries falling back one by one into recession.

Which brings us back to the politics of energy shortage. That voters don't like empty fuel tanks is clearly imprinted firmly in government thinking. They had better remember (and I think they do - see previous post) that power cuts are, if anything, even less popular. But it still needs to be played adroitly, strategy and tactics, long-term and short-term.

Lights go out, government goes out. It's an old equation - ask Ted Heath.

I do wonder why there are so few tanker drivers.

Perhaps the private fuel companies have already decided the optimum number of them they need to keep trained up over the expense of continual churn, vetting and recruitment.

That has made them rare.

In which case, why bother to pick a fight with this particularly essential group ? Especially over safety issues ?

The market found its own level. Turning this issue into one that can be Cameron's Scargill moment because "Tanker drivers are on 45k !" (heaven forbid) smacks of Conservatives using the politics of envy to their own ends.

So disagreeing that the Govt didn't do much wrong.

point taken, Kev, there must be several such groups that are quite well looked-after

I should have thought if you live in the S East £45k is just enough to get by. People round our way are generally very unimpressed by Heath-without-Brains over this whole affair.

If he got over his admiration for Bliar and developed some for Mrs T we might be better off.

Well, assuming one agreed with ND on this, the govt approach was totally cack handed. with no engagement at all with RMI petrol they totally missed the most obvious bottleneck and thus chaos ensues.

all while there wasn't even a strike date mentioned! the whole thing smacked of bloody minded confrontation. not dissimilar to a Brownian approach if you ask me.

isnt the more grown up (and credible?) approach to bring the parties together and be seen to head the strike off at the pass?

I disagree about the handling of the tanker drivers dispute. It has badly harmed the public confidence in gov. If they continue a General Strike demanding the impeachment (or similar) of the gov is on the cards. Blair had the upper hand last time because the public mainly agreed with the high duty argument. This time 2000 drivers want a pay rise and it effects the whole country... Hummm.

In fact the stories reinforce my view, since they look orchestrated

My view too. Its very odd seeing a different world to the one actually being portrayed.

Example : Looking at when a country becomes a net oil importer is a very good predictor that there will be "interesting times" ahead. Egypt is a prime example, there are many more.

There must be boffins (mi5?/mi6?)in the civil service somewhere that notice these things. Knowing when a country becomes unstable is high quality intel surely.

Argentina starting a politics spat was obvious if you look at their energy data.

But will the government get kicked out if the lights go out? They are slimy (all sides) and an obvious target to blame is the "green" movement.

This paper just came into my RSS reader...

"This research has found that the peaking of world oil production will increase the
resource awareness of great powers. While oil production will decline, nations will try to
preserve their high level of organization. The world politics will shift from idealism,
typical of our present growing economy, to realism and offensive realism. The economic
rules will move to those of a negative sum game. As a consequence, minor geopolitical
players will have to align will great powers, to ensure minimal losses in oil supply.
Finally, the great powers will wait until the last moment to start mitigation measures
against oil depletion. Indeed, too early a transition towards new sources of energy
constitutes a risk to alter their current geopolitical position."

Worth a read IMHO.

"point taken, Kev, there must be several such groups that are quite well looked-after"

No. Didn't think you meant those.

Simply supply over demand. Constricted by minimum entry requirements - a long-ish training period (and how we've minimised both !), and a limited number of posts.

Or else it's to over-employ within such industries to keep wages down but this is even more uneconomic.

These are all private sector businesses remember.

Rest assured that competition for such jobs is intense, the average Joe couldn't be trusted to do them and that 45k offers a pretty modest standard of living nowadays.

I expect that Tanker Driver (like me) will live in exactly the type of ex council house and drive the worn out type of car that politicians would expect of such a lowly grade.

JIT petrol and melting Nukes - I say blame the Japanese.

Lights going out will be really bad, but I have been long convinced that it is coming to the UK.

Pre-budget, you could have just about made an argument this was 'strategic genius' Gideon seeing a play 5 moves out. However, he's now been revealed as a twerp. And the nonsense from the undoubted twerp Maude confirms this has been a bungle from start to finish.

there is rather too much of this "strategic genius", n'est-ce pas ?

there are people whose judgement I would (ordinarily) respect who know, and think the world of, the Boy Osborne; but it often feels like clever-clever student politics to me