Friday - What will the weekend bring? 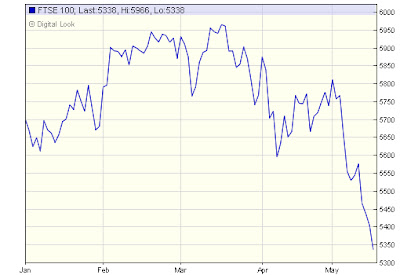 Above is the YTD FTSE graph, poor reading it makes. This month has bee an unmitigated disaster though in particular. After an OK start to the year it has all gone pear shaped. In an exact re run of 2011, oddly enough - albeit for different reasons.

With the endless euro-mess there has been a move out of equities into safe haven bonds - quite irrational when you think those bonds are of UK and Germany in part both of whom will get wiped out in a major euro collapse as their Banks fail. Hey ho.

What intrigues me at the moment is the euro-denouement re Greece is approaching. Probably it won't be this weekend. However, it will be a weekend as it always is. the markets are closed and Governments can conspire against us (or maybe even for us?) freely.

Then one Monday in the next 6 weeks Greece will be in or out of the euro and a huge liquidity stream from the Central banks will be with us. It's quite likely there will be a strong equity rally after this for some time, until again people realise the problem is not fixed but has been kicked down the road again.

In the meantime, my equity portfolio is destroyed, again.
Posted by CityUnslicker

not irrational to buy bonds from nations with low probability of default:

You are (almost) guaranteed to get your money back, all of it.

You are (almost) guaranteed to get some interest.

Can't really say the same for shares in a scary market. Bonds are a useful safe haven for funds that have to stay invested to avoid paying tax.

The problem with saying "Then one Monday in the next 6 weeks Greece will be in or out of the euro ..." is that if Greece is out, it really is out for the foreseeable future. But if Greece is in, it could be out at any time - that is, the damage would be ongoing.

When it started to become fashionable to say that Greece would exit, and the euro would collapse, "imminently" I maintained that our EU masters would use any method, legal and illegal, to keep the euro going. So it has proved

Eighteen months later and it is beginning to look like the EU is running out of tricks. And although the EU is partially addressing the debt problem, it fails to address either the 'one-size-fits-all' interest rate, or productivity differences, or nationalism.

It's either full fiscal union, a la USA, or bust, eventually.

My shares are also doing badly. Xtract, Xcite, GKP, EMED, down down down.

I sold my RR which I have held for years. Primarily to put the cash in to my SIPP (which has promptly shrunk under the baleful influence of the rotten euro).

However, I am a little concerned because RR seems to make a lot of its money from service contracts, nowadays, which seem to me to hold the future company to ransom. Anyone else any comments on this?

Wow Budgie, I did the exact opposite and sold the RR in my SIPP (along with some other holdings) to release cash for my lump sum at 55 ( haven't taken an annuity; the rest is still invested).

I still think RR is a good long term investment though. It's one of the few quality engineering companies left in Britain, and having service contracts for jet engines for example is a good thing surely, guaranteeing a future income stream. If anything it's the customers who are potentially held to ransom surely - who else will service an RR turbo fan jet?

The only real dog is xtract - I bailed at a loss after the failed Luna drill. Clearly the timing with the market is terrible now, but still - its going to be sub penny at best unless the Chevron gig comes up - which it may well do.

One I am looking at closely is CHAR - fallen off a cliff after a very speculative drill - market timing terrible. Sadly no funds at the mo for a big punt.

Agree re Greece staying in - unless they stay in AND deploy a big bazooka.

Finalt tidbit, I have heard today that the Chinese are flying in this weekend to discuss taking a big chunk of RBS - they won't be buying for 20p I am guessing.

It must have felt a bit like this in Weimar Republic circa 1932.

Now we get to own bits of Royal Bank of Shanghai too. What's not to like?

And there's still talk of QE. It's a cracking legacy for the kids - global interdependence based on crippling levels of fake moneyed debt. Most despiriting. Ho hum.

Don't you people use stop losses?

I've probably lost about 5% in value of my ISA portfolio over the last few weeks thanks to them kicking in. Consequently I'm nearly all in cash now. Not great but It could have been worse.

Which of you said the dominos fall slowly ?

Three and a half years ago Willem Buiter was predicting that state backing for private banks would convert the crisis from one of private solvency to sovereign solvency - combine that with the structural Euro difficulties (Greeks not being Germans) and we have a right pickle.

It's difficult to tell what'll happen next, because, as Jonathan Weil said four years back:

It's now governments in the plural, but otherwise the same ...

Delors should be doing jailtime, along with a good few hundred of the elite fools and their bankster placemen.

We've had hubris and nemesis. But we're still a long way from catharsis, which requires:
(a) unpayable debts to be written off
(b) bankers and (ideally) politicians to go to gaol.