Tax-Dodging Civil Servants: Nothing New Under The Sun 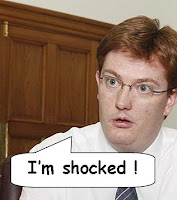 I really find this hard to credit. "2,000 senior public officials on more than £58,200 were found to be paid “off payroll” ... paid through service companies, or through employment agencies. The amount of tax legally avoided could run into tens of millions of pounds."  Danny Alexander is shocked !

History Corner here: we've done all this nearly 20 years ago, when John 'Dalek' Birt was revealed by the Inde to have wangled his way around the BBC whilst wreaking havoc and lowering standards.

"John Birt, the new Director-General of the BBC, has avoided tax by being paid as a freelance consultant - despite being a full-time employee of the Corporation. Instead of paying tax on his BBC salary, he has been taxed on whatever he chooses to pay himself from his private company ... for six years as Deputy Director-General he was paid through his private company."

That was written in ... 1993! And my clear understanding was that Birt being rumbled in this way marked the beginning of the end for this little scam, both as regards what the public sector would allow, and indeed what the Revenue would permit.

It seems I woz wrong.

It is not as simple as that. For some, particularly civil servants, it is indeed a scam whereby they carry on with their old jobs but as "consultants". The principal advantage is for the government: it can claim it has reduced its people count.

But in the private sector it is often the only way for people to get work after redundancy - especially in a shrinking industry (typically engineering, where there is a glut of engineers and fewer jobs by the day).

For such people they may be out of work for months between contracts; may have to take dodgy contracts and risk not getting paid; and sometimes supply goods as well as services, just like any other commercial business.

The next question you should ask is: How many of those at the top end of Revenue and Customs also work this little wangle? If they are up to their necks in it, there is little hope of it being investigated properly. Ditto for the senior members of the forces (oh, sorry - services) up and down the country.

But if they have to make their own pension arrangements is that not a saving for the public purse?

That's a pretty big if. I expect the pension contribution is part of the package

Depends on the package - I'm a mid-level IT consultant and I don't get sick pay or holiday pay, have no pension contributions but my own, and as I'm self-employed I pay my own employers NI. They get invoiced for my rate*days worked and that's it.

I'm a lot cheaper for the Public Sector than permanent staff, even though I'm on half-again the daily pay for an equivalent role.

Of course, I would imagine management consultants may have rather more attractive packages - after all bad decision making is worth a great deal in the Public Sector, consultant-originated or otherwise...

Tax rates are much too high. Everyone uses the escape routes available to them. The hypocrisy of tax enforcers joining the rest of us makes their behaviour a disgrace while ours is merely rational.

looking at the outrageous corruption of our MPs who at least are turfed out every 10 years it would be highly surprising if top civil servants, who basically have a job for life in some pretty lucrative situations, were not also up to their necks in it.

I remember the senior police office taking back-handers from the sex trade in Soho. I expect nowadays it's drug dealers spiking the guns in the "war on drugs" by offering back-handers to police, for an illegal trade that the public seems to know more about than the men in blue. This is just one example of obvious civil service corruption where nothing is done. Sure to be many more.

Those at the top all know each other, all went to the same schools, all have the same "them vs us" attitude. We are just to busy with our own problems to poke around in what they are up to.

I don't get this Richard Murphy bloke. Before he became a tax crusader, he had a column in the Guardian which advised people how to avoid paying tax.

But then, that's the Guardian for you. Speaking of which, and off topic, there is a very funny article on Ken and the Labour Party in the Speccie.

Excerpt below refers to the Guardian, and is very funny, IMHO


"The London middle-class left, of which Livingstone is the ultimate expression, has been the single most destructive force in Labour’s entire history, genetically programmed to detect the wishes of ordinary people and then do the opposite."

If you are in IT they won't allow it. Lookup IR35 - came in about 10 years ago? They picked on one trade just one! then the gov. wondered why half of IT folk "disappeared".

Timbo614 largely right. It was John Birt that gave rise to IR35. Red Dawn Primarolo then used a combination of mendacity and incompetence to produce the IR35 saga against contractors. In personal conversation the lunatic from Fife had seen it being used against footballers (how did that work out?). Our so-called conservatives have, of course, reviewed IR35 and decided to keep it (another election manifesto promise broken).
These civil servants using service companies are bang to rights on IR35.

and the answers are either switch to a flat-tax system where all kinds of income/gains etc get taxed at the same rate or, much easier