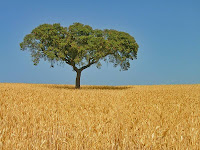 The USA considers itself strategically at risk by virtue of being an oil importer: but it has a food surplus, so (under a very specific Federal mandate) it turns foodstuff wastefully and large-scale into fuel.

Saudi Arabia considers itself at risk from being an importer of food: but it has an energy surplus, so it desalinates seawater using huge amounts of energy and makes the desert fertile, turning it to food.

If only international trade were more dependable ... (eh, Budgie ?)

Anyhow, with widespread drought in the USA, thoughts are turning urgently to halting the gigantic compulsory conversion of corn into ethanol.  This is just one flashpoint among many where the trade-off is food vs fuel: the EU is having second thoughts about bio-fuels in general - and not before time.

Food vs fuel.  People riot when they can't get either.  Wonder which wins...  your views ?

Email ThisBlogThis!Share to TwitterShare to FacebookShare to Pinterest
Labels: Energy and Industry, Oil, Politicians at work

Northern Europe ...... Thankfully no riots due to lack of food or fuel in my lifetime (43 years) that I know of. I await being flamed ??? and corrected, but the miners strike in the uk does not count.
I guess if any European country ever gets that bad it will not be police in riot gear but the army and live rounds fending off an external aggressor.
Read some where the uk is only so many hours/ days away from riots without food (probably some bolloxs from the daily mail when it snowed)
Riots are more likely on summers evening when the 'yoofs' have been drinking premium strength lager and cider, then lack of macdonalds.

I'm guessing, ND, that you weren't of a mature age in the 70s when the lights really did go out, thanks to strikes we couldn't get bread from the shops (we didn't have too many freezers then either) and it seemed like the Russians were going to march in any time, ably abetted by the enemy within, or Harold Wilson as we used to call him.

When you look at modern standards of living, things are really not that bad you know.

whether the Russians were at their (relative) strongest then is a well-known parlour-game: there is a case for mid '70s, but also a good case for mid '80s as well

Mid 80s were a turning point and we took the wrong direction. We seemed to be markedly richer than in the '70s though.

Even asking 'heating or eating' legitimises the faux-alternatives offered by banksters, trans-national companies and bought and paid for politicians.

The EU is a castle of lies, so right off you know that self-serving Eurocrats are fiddling the books on everything

The stated reserves in all the OPEC member countries are likely a pack of lies.

Is there any gold in Fort Knox? No independent audit has been allowed for decades.

The scientific community has thoroughly prostituted themselves over global warming and have no more credibility than street-corner hucksters.

The elite fools in Westminster will say and do anything so long as their snouts can remain in the trough, including starting illegal wars.

*Everything* in the controlled media, notably the BBC, is a lie, put out by the elite to maintain or increase their power.

anon - recognising the force of much of what you say, and that the dilemma can be seen as a false choice from a very holistic standpoint - - - it is nevertheless a genuine trade-off at the micro-level for some time to come, with real stomachs on the line

and in the short run - you can starve

The wonders of Autarky ... on a straight choice ehich is worst ... I'd say food more important that fuel. At least without fuel the rioters find it harder o make petrol bombs :-)

Fuel - there is plenty of food really, but it has to be moved to where people are to eat it.

Look at India this summer, millions of tons of rotting rice and wheat, people starving in villages - fuel, politics, corruption being to blame.

The whole USA thing is politics too, as you say, with trade there is plenty of fule but they don't want Venezuelan oil in the USA.

Well the US has their balance of payments to think about - burning food decreases their dependence on expensive energy imports whilst ensuring that grain prices go through the roof, making their exports of grain more profitable. Bit of a political master-stroke by the Republicans really, which explains why Bush suddenly got converted to "green" energy late on in his presidency.

Imagine, if we hadn't improted so many immigrants the population of the UK would be 40million and we'd not be having this conversation because we could feed ourselves regardless....

Your word verification is very difficult to read!

... but you triumphed in the end, anon

so thanks for sticking with it

yes folks, it's politics all the way (- I like Hovis' suggestion that the key is restricting fuel for petrol bombs: can we restrict uranium ..?)

Since pre WW2 which was a bit of a low point for British agriculture, we are almost self sufficient.
Some 72% of indigenous staple food is grown here.

That's a big improvement since WW2 when it was around 35%.

If we were in a U-boats in the western approaches situation we could probably feed all of our 60-70 million people. Agriculture employs only some 2% OF the population.
There are generous subsidies to not grow anything at all.

Some foods would completely disappear and we'd have the same sort of unappetising menu as our grandparents ate in the '40s.

But we could almost certainly manage to feed everyone,on a reduced and rationed diet, even with a total import blockade.

the gigantic compulsory conversion of corn into ethanol

Once drop the compulsory anything and we're on the way again.

ND (7:00): not sure juxtaposing the missus with the Angry Brigade is a recipe for harmony in the home there...

in the words of Giles Brandreth

Not all 70s cars were rubbish. I still remember fondly my Ford Capri, even if it did drink 2 pints of oil a week. (I had a secretary too! That was better than doing my own typing on a damn smartphone or laptop.)

how much did the secretary drink ?

(what happened on her laptop ?)

SW's comment reminds me I was talking to someone on the commute the other day and they were lamenting the falling by the wayside if the typing pool replaced by do it yourself technology ...

If only international trade were more dependable ... (eh, Budgie ?) What???

You think a Wahabist will trust an Evangelical? In your dreams.

Sadly my secretary was the same age as my mum and a pillar of rectitude. But one of my colleagues was more lucky. How we laughed when we spotted bum prints on his desktop.