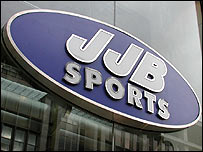 JJB Sports has put itself up for sale and warned its shares may be worthless after the struggling retailer failed to secure a fresh funding injection from investors. The shares immediately fell 71 per cent to 0.67p.

JJB has long  been on the C@W no-no, don't touch list. The company has been bailed out, restructured, refinanced, remodeled and rebuilt many times in the last few years. Its had two company voluntary arrangements already.
Nothing has worked. The glory days when an England squad even taking part in the Euro's soccer tournament or Manchester United beating Arsenal were enough to sell a million replica strips are long gone.

Rival sportswear chains JD and Sports Direct are much more successful. Sports Direct is +46% on its share price this year. JJB is -97.95%. JD likes to move in the higher end of the sports brand market, taking a higher margin. Sports Direct like to bottom feed, volume selling cheap goods. And Sports Direct is quite a bit cheaper than JJB. And its been pouring cash and brains into its online offer and is doing very, very well there too. And Sports Direct very recently pinched JJB's contract to supply, design and retail Rangers FC merchandise after the JJB arrangement was cancelled after Rangers went into administration.

US sporting store giant Dick's, an investor at JJB, recently put £20 million in to the company. That wasn't enough to make the turnaround.

JJB is down 3.3% on August like for like figs. This August most larger shops should have seen a boost in sales. Big sports shops particularly.
A boost from the 2012 Olympics itself and the relaxation of Sunday trading laws. And 2011 August sales were nothing to get excited about, being down -0.5% on 2010. If you can't get ahead during August 2012, then you're not going to make it.

The Capitalists@Work 'Woolworths'  test is now complete. As sales have fallen so have margins. Borrowing has increased. Investment is scarce. Support staff are axed. Training lapses, staff numbers fall, service declines, inventories shrink, refurbishments cease, image decays. Stock suppliers begin to seek alternative retailers. Shoppers scale back and then search for cheaper alternatives. They find others are doing it better.  Investors panic...
If the recession isn't quick the money required to repair all those negatives will never be found.
This recession has been deadly and JJB has never really looked like they were going to make it in their current form.
Posted by Bill Quango MP

These "sports" shops used to make their money from trainers made in Vietnam for £1-00, and sold for £80-00. It was a bubble. It has burst. JJB hasn't adapted.

But the fundamental problem is that the UK doesn't make so much now. Yet, for a time, management can wax fat on buying third world and selling at first world. And gulling people into thinking they are successful.

On the nose Budgie, too right.

Budgie - China makes loads of stuff, Budgie - but where would you rather be now in terms of a long-term economy?

Having said that, the idea that retailers are a good indicator of much is duff - they are middlemen in a consumer depression they will get whacked. Also what % of the high street was due to go anyway as we buy on line over the past few years.

YOu have given me the idea for two posts though...thanks.

I am less worried about this in some ways - and in others preparing for a the next true industrial revolution.

There is always a tension between automation and human effort.

In the same way that the infrastructure we spent so much on in the UK (fibre) may well be replicated for much less in other countries (wireless), the next generation of cheaper robot factories and 3d printers will start to push the balance towards it being more sensible to manufacture close to the place the product will be used.

In many ways, we will not need 'shops', but will want to go to places that provide a nice experience (apple shops) or the modern equivalent of the villiage smithy (someone who has a big 3d printer).

Underneath it all, you can compete with chinese labor costs if the capital cost is enormous or the labor cost tends -> 0.0.

what worries me is how many people will be needed in this brave new world - I have lived with the 'fixed lump of labor fallacy' for years, but some thinkthere may be issues that may lead to a long term lower rate of growth [pdf]

Actually that's not what I was saying. My point was about the cheat factor: buying at third world prices yet retailing at UK made prices.

In fact at the time (20 years ago) we probably could have made trainers (much easier to make than leather shoes) to retail at £80.

The other 80%+ are the overheads: excessive regulation, taxes, expensive materials, bloated management, poor design, lack of investment in automation (and no, I don't mean fancy robots). And then there is the 5 times mark-up (inc VAT), so that an ex-factory price of 20p becomes 99p in the shops.

If we wanted to the UK could compete profitably on a much wider range of manufactureds that most people imagine. It won't be simple and certainly won't turn a fast buck. Hard work and no politicians' wheezes.